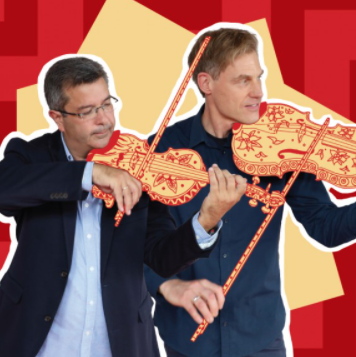 WASO wraps up its mainstage season with two works that wear their influences proudly on their sleeves. Having toured Europe relentlessly since his childhood, Mozart had more first-hand experience of the great orchestras of the continent than practically anyone living: his Sinfonia Concertante gathers together a number of the techniques that he had learned at Munich, Mannheim, Paris and London and combines these into something new and bold. Bruckner’s Seventh Symphony was partially written in tribute to his idol, Wagner: the second movement marks the first time Wagner tubas ever appeared in a symphony, and legend has it the cymbal clash at the climax of the movement was written upon hearing the news that Wagner had died. Johannes Fritzsch conducts.

We begin with Mozart’s much-loved Sinfonia Concertante for violin and viola. Together WASO Concertmaster Laurence Jackson and Principal Viola Daniel Schmitt will reveal this magical work’s beauty, poetry and brilliance.

Bruckner said that his first symphony came to him in a dream, played by an angel. A breathtaking memorial to his idol, Richard Wagner, the Seventh is an emotional odyssey that scales triumphant peaks and plummets to dark valleys of sorrow. In the hands of maestro Asher Fisch, this symphony will astonish you with its richness and raw power.