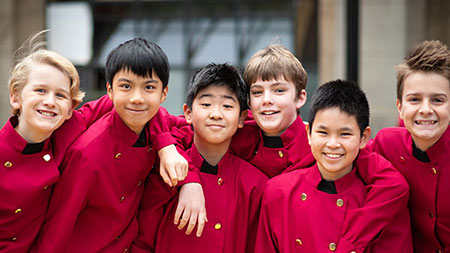 Australian Romantic & Classical Orchestra joins with Australian Boys Choir and The Vocal Consort to present some of the finest 18th-century choral repertoire.

This program features the sparkling Spatzenmesse of Mozart and includes works by fraternal composers Joseph and Michael Haydn.
Beginning with a Litany to the Virgin Mary by the teenaged Mozart, the first half of the performance also pays homage to the special bond between Franz Joseph Haydn and the younger Wolfgang Amadeus. Haydn’s Little Organ Mass was dedicated to the Hospitaller Order of the Brothers of Saint John of God in Eisenstadt and Haydn was the work’s first organ soloist.

Joseph’s younger brother Michael was also a prolific composer of devotional music, most of which is yet to enter the realm of regular performance in either church or concert settings. Michael Haydn’s Litany, MH 71 takes on a sense of grandeur and opulence with the inclusion of trumpets and drums. This is the work’s first Australian performance.

Known as the Sparrow Mass for the chirping violin figuration in the ‘Osanna’, K.220 employs ebullient orchestral colours and contrapuntal imitation to sparkle as a work of effervescence and bring this performance to a joyous conclusion.