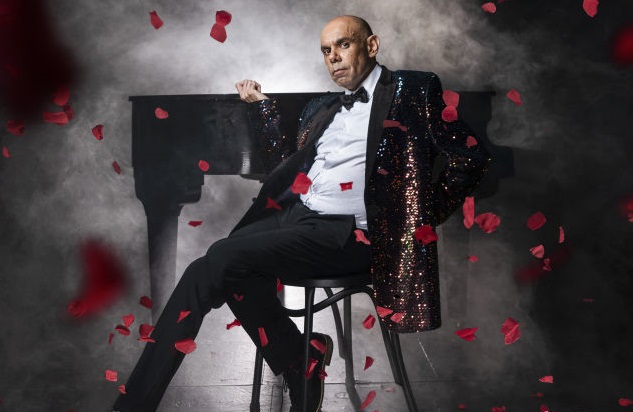 Bigger & Blacker is a comedy cabaret guaranteed to get you laughing, thinking and shimmying in your chair. Oliver’s ability to entertain while bearing his soul is the mark of a true cabaret artist. In this candid nod and a no-holds-barred ode to his personal journey, he creatively and expertly combines humour and contemplation, leaving the audience smitten.

Steven Oliver from ABC’s hit television series Black Comedy brings his critically acclaimed cabaret Bigger & Blacker to the Studio fresh from La Boite Theatre in Brisbane. The show was first premiered at the Adelaide Cabaret Festival in 2019 to stellar reviews and overwhelming popular response. Weaving comedy and contemplation though stories of love and loss, in Bigger & Blacker Oliver mines his own life to reflect on fame, friendship and the power of music. A seasoned performer, Oliver is also a talented songwriter whose original score runs from perky pop to urban rap to lilting lullabies. Throw in a disco ball, dance breaks and spicy banter between Oliver and his on-stage companion, musician Michael Griffiths for a guaranteed fun night out.