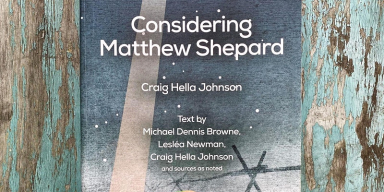 Considering Matthew Shepard represents one of the most significant Choral works of the 21st Century. Styled as a three-part passion oratorio, the work is a response to the murder of, 21 year old gay man, Matthew Shepard. On October 6, 1998, University of Wyoming student, Matthew Shepard, was picked up at a bar, after which he was kidnapped, beaten, and left to die. Matthew’s attenion drew international attention, and was informed the “Matthew Shepard and James Byrd Jr. Hate Crimes Prevention Act” signed into law by President Barack Obama in 2009. Consider Matthew Shepard a part of Matthew’s story, as well as that of many of the other individuals and groups involved in the event, including his family, assailants and others. More broadly, it considers what makes us human, what unites us, what leads us to acts of violence and cruelty, and, most importantly, how can we heal and be united. Raw and emotive, the work is ultimately a work to promote acceptance and compassion.