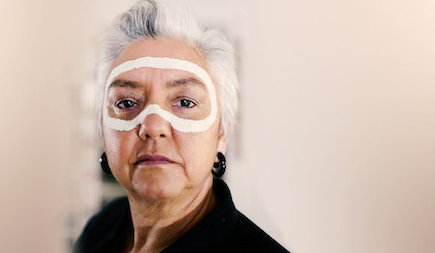 On what would have been the evening of the world premiere of Lou Bennett’s new work for Omega Ensemble, Omega Ensemble invites you to join Bennett in a special conversation with composer and broadcaster Julian Day.

Yorta Yorta Dja Dja Wurrung, Dr Lou Bennett AM is one of Australia’s most prestigious and prolific performers. Over the past thirty years, Bennett has had various roles as Songwriter, Artistic Director, Composer, Actor and Soundscape Designer including as a founding member of Tiddas and transforming the Black Arm Band into an acclaimed Indigenous performing arts company. As Westpac Fellow at Melbourne University, Bennett continues her research in Indigenous language retrieval, reclamation and regeneration.

Commissioned by Omega Ensemble, Bennett’s new work titled ‘nyerrnur, nyarkur – to hear, to see’ was to have received its world premiere as part of the Ensemble’s national tour in September. Due to recent restrictions, these performances have been postponed to 2022.

Joined by popular composer and broadcaster Julian Day, Lou Bennett will discuss her music, career and composing for Omega Ensemble.