: Jack and the Beanstalk

An event every week that begins at 7:30 pm on Thursday, Friday and Saturday, repeating until 11 December 2021 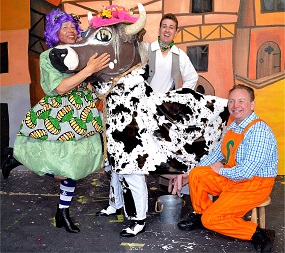 Oh yes it is! Popular pantomime Jack and the Beanstalk is branching out at Limelight Theatre, ready to provide plenty of laughs, dance and song.

Written by Ben Crocker and directed by Gwen Browning, the story follows Jack who is in love with Princess Demelza – but the giant who lives in the clouds demands increased taxes and the princess’ hand in marriage.

To pay the giant, Jack is forced to sell the family cow but is tricked and paid in beans instead.

He throws them away but they magically grow into a huge beanstalk, allowing him to climb into the clouds so he can attempt to rescue the kidnapped princess.