An event every week that begins at 7:30 pm on Wednesday, Thursday, Friday and Saturday, repeating until 23 July 2022

An event every week that begins at 6:30 pm on Tuesday, repeating indefinitely

An event every week that begins at 1:30 pm on Saturday, repeating indefinitely 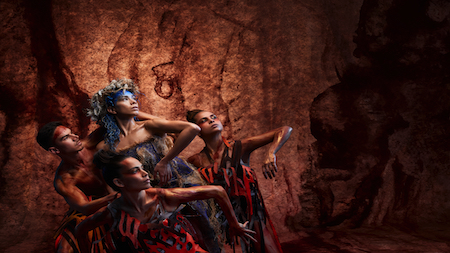 This new work choreographed by Stephen Page and Frances Rings tells the story of the Walmajarri people from the Kimberley region of Western Australia, who between the 1920s and 60s were removed and forced into hard labour on pastoral stations. This is the Country of Wangkajunga woman Ningali Josie Lawford-Wolf (1967–2019), a close cultural collaborator of Bangarra. SandSong honours her legacy and family.

Under the vast Kimberley sky, the red pindan dust stretches across the desert homelands of the Walmajarri, where the ancient knowledge of People and of Country is preserved through Songlines that have endured for hundreds of generations. Sandsong tells the unique story of this Place and the survival of its People.

SandSong is created by Bangarra Dance Theatre in consultation with Wangkatjunga/Walmajarri Elders from the Kimberley and Great Sandy Desert regions, drawing on the stories, knowledge and memories of the past to create a new narrative for our Indigenous futures.

This work honours the legacy of Ningali Josie Lawford-Wolf and her family -past, present and future.