An event every week that begins at 5:00 pm on Thursday, Friday and Saturday, repeating until 4 December 2021 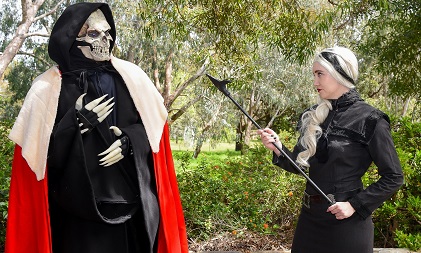 Christmas is being turned on its head in Terry Pratchett’s Hogfather at Roleystone Hall.

Adapted by Stephen Briggs and directed by Bradley Towton for Roleystone Theatre, the Discworld version of Santa Claus – known as the Hogfather – has gone missing.

The character of Death has to step into the red-and-white costume to keep children’s belief whole and safe, although he isn’t very good at the job.

As a result, he enlists the help of his granddaughter Susan in an effort to save the special occasion.

Dying of Alzheimer’s in early 2015, Pratchett was the UK’s best-selling author of the 1990s, selling more than 85 million books worldwide in 37 languages.