An event every week that begins at 7:30 pm on Thursday, Friday and Saturday, repeating until 26 June 2022

An event every week that begins at 1:30 pm on Sunday and Saturday, repeating until 26 June 2022 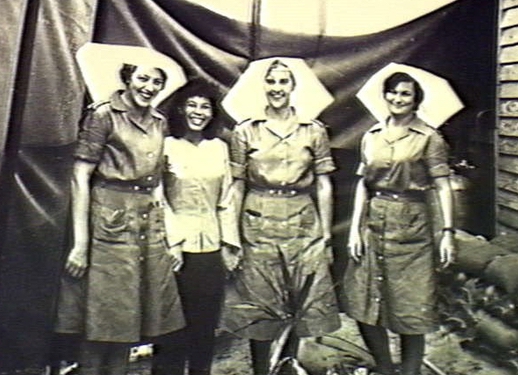 This new opera by Brenton Broadstock is about the experiences of four Royal Australian Army Nurses Corps nurses who arrived in Vung Tau, Vietnam in May 1967 – the first of 43 Aussie nurses who would be sent to the conflict zone over the course of the war. The storyline and libretto are by soprano Elizabeth Lewis, inspired by Annabelle Brayley’s book Our Vietnam Nurses. The opera follows one nurse in particular (a fictional character based on several nurses who were interviewed for the project). Soprano Emma Nightingale stars.

In May 1967, four Royal Australian Army Nurses Corps nurses arrived in Vung Tau, Vietnam. They were the first Australian Army nurses to be sent to the conflict in Vietnam. Over the course of the war a total of 43 RAANC nurses served between 1967 and 1971, first at the 8th Field Ambulance and then later at the 1st Australian Field Hospital. Many Australians are unaware that these women served their country in Vietnam. Until Elizabeth had read Annabelle Brayley’s excellent book Our Vietnam Nurses, she too, was ignorant of the courage these women displayed and the sacrifices they endured. It is our intention to stage a newly composed opera based on the nurse’s stories and experiences in Vietnam.

The concept for the show and the libretto has been written by soprano, Elizabeth Lewis and the music has been written by renowned composer Brenton Broadstock AM. In 2022, Australia will mark the 60th Anniversary of the country’s involvement in the Vietnam War. The opera, The Nurses at Vung Tau, is meant as a tribute to Australia’s Vietnam War Veterans and the 43 incredible women who worked tirelessly to help their patients recover and return home to their families. The opera follows the story of a nurse during her time in Vung Tau and the experiences, both painful and joyful, which occur while she is there. While the main character of Abigail Hughes (Abby) is fictional, she is based on several nurses who were interviewed for the project and the events which the actual nurses experienced. The work encompasses a range of emotions from pathos and anger to humour through the dramatic events of the story. We feel audiences will be able to relate to the characters and really empathize with Abby and the nurses’ experiences.

Originally, intending to commission an orchestral song cycle for herself based on a set of poems she wrote about the nurses, Elizabeth contacted composer Brenton Broadstock AM. It was Brenton who suggested that Elizabeth revisit the poems and transform them into an opera and agreed to compose the music for the work. Detailed biographies on both Elizabeth and Brenton can be found in the next section of this document.

The opera is presented in three parts, although there is no interval and runs for approximately 90 minutes.