An event every week that begins at 7:00 pm on Wednesday, Thursday, Friday and Saturday, repeating until 22 August 2021

An event every week that begins at 7:00 pm on Tuesday and Saturday, repeating until 22 August 2021

An event every week that begins at 1:00 pm on Wednesday, repeating until 22 August 2021 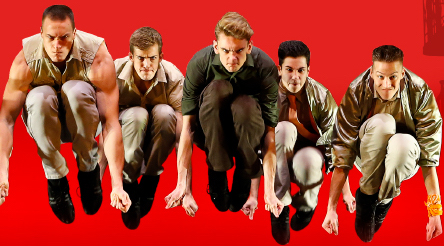 West Side Story is hailed as one of the greatest musicals of all time. Inspired by Shakespeare’s Romeo and Juliet, it is set in the Upper West Side of New York in the 1950s, but its snappy Bernstein score and pointed Sondheim lyrics still land punches. Opera Australia and GWB Entertainment present the BB Group production, directed by Joey McKneely, whose background includes being choreographed by Jerome Robbins himself. It’s no surprise then that the dancing is excellent. “Lithe, precise, energetic and evocative, it’s easily one of the best aspects of this production,” said Patricia Maunder for Limelight.

The moment the curtain went up on the original West Side Story on Broadway, musical theatre changed forever.
Hailed as the greatest Broadway musical of all time, the genius of West Side Story‘s creators is unquestioned. The remarkable collaboration between Leonard Bernstein, Arthur Laurents, Stephen Sondheim and Jerome Robbins produced a timeless masterpiece.

Bernstein’s world-famous score features unforgettable songs, including ‘Maria’, ‘Tonight’, ‘Somewhere’, ‘America’ and ‘I Feel Pretty’, that have been universally adored for generations, proving this iconic dance musical remains one of the most poignant stage works of the twentieth century.

A modern retelling of Romeo and Juliet, this tragic love story tells the tale of two young people whose happiness is destroyed by the hate of two enemy camps in New York City’s urban jungle. The Jets, sons of previous immigrants to America, battle the new arrivals from Puerto Rico, the Sharks, for domination of the streets.

The ideal fusion of dance, music, and theatre; experience this internationally celebrated production of West Side Story for a limited season only.