A huge screen will dominate the new three-actor Australian stage adaptation of Animal Farm, a text that warns as potently today of the dangers of authoritarianism as it did when George Orwell first published his novella in 1946.

The screen is as “big and bright as the world”, advises playwright Van Badham in her stage directions, for the revolution will be livestreamed here at Perth’s Black Swan State Theatre Company. The play speaks to Orwell’s text by resetting the action at a Trump rally, with its white Americana masculinist aesthetics.

Power-hungry pigs will mastermind the overthrow of human overlords, then set about marginalising from power the horses, cows, donkeys, chickens and goat they had manipulated via social media propaganda, where emotions become facts, into forming a baying mob in the name of a utopian collective. 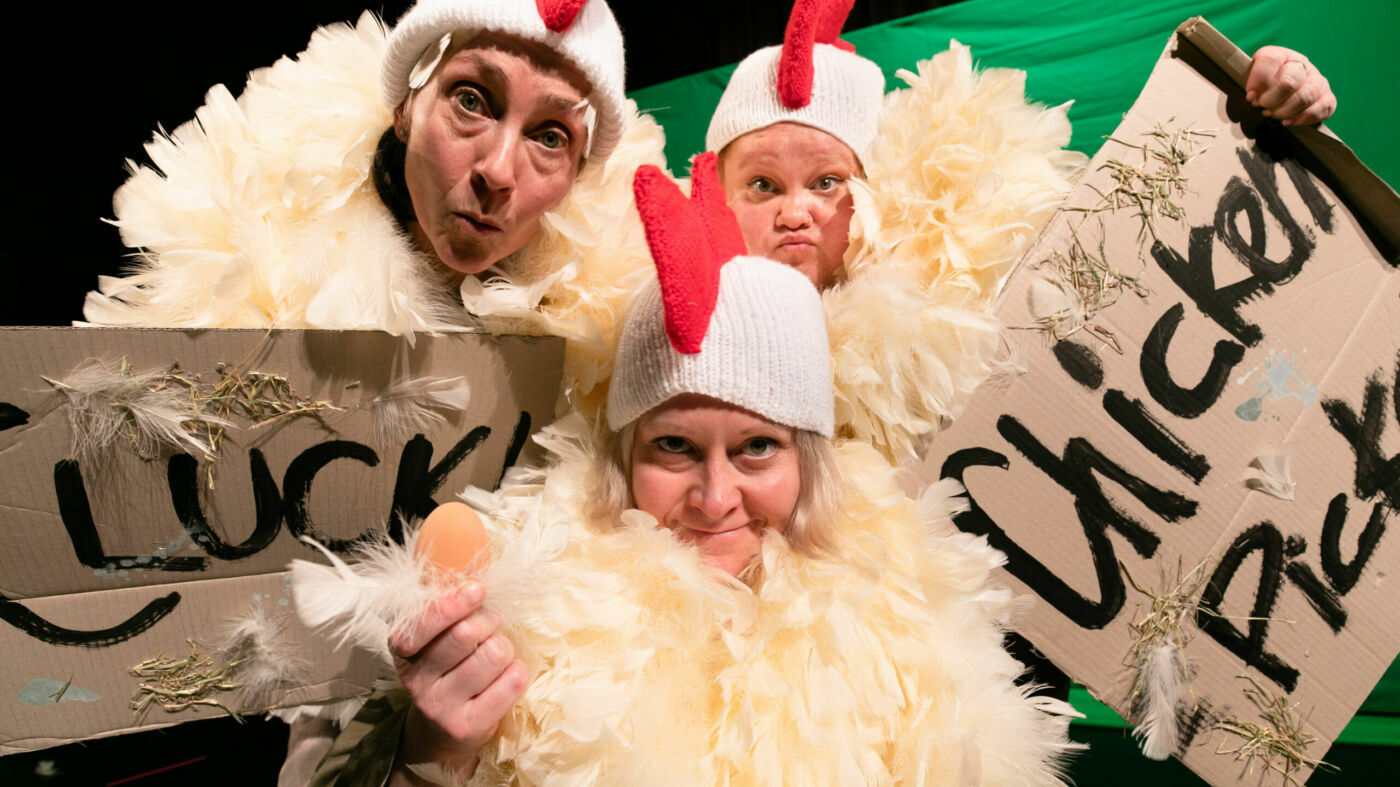 In September 2020, Badham delivered her playscript, with main roles eventually divided thus: Megan Wilding in the expanded role of pig Squealer and donkey Benjamin; Alison Van Reeken as Napoleon the tyrant pig and Muriel the goat; and Andrea Gibbs as cart-horse Clover and pig Snowball, overthrown by Napoleon.

Play finished, Badham then set about writing a new book about QAnon conspiracy theorists, having already assumed an alias online in the QAnon community. The book, due out in November this year, developed into an examination of events leading up to the protests and storming of the United States Capitol on January 6 and the attempt to overthrow the democratically elected Biden Government.

Meanwhile, the COVID-19 pandemic and theatre shutdowns delayed the staging of Animal Farm for more than a year. But given Badham had already filtered her knowledge gained through her surreptitious engagement with hard-right communities into her adaptation, the script needed no updating to be read as a reflection of the January 6 maelstrom.

Badham tells Limelight she first read Animal Farm in 1989, the year the Berlin Wall fell, and recognised an “ideological kinship” with Orwell as a democratic socialist and fundamental believer in democracy, who had been deeply influenced by the events of the 1936-39 Spanish Civil War.

Orwell, says Badham, “saw the anti-democratic tenet of the Left in the Stalinists that turned up to that particular conflict, and of course they were fighting the fascists as well. He was an equal opportunity critic of authoritarianism”. Animal Farm had a profound effect on Badham’s analysis of the world as it was then – as a “post-cold war socialist” she had to “face the legacy of the Soviet Union honestly and with condemnation”.

The text has remained remarkably robust. “The chilling parallels to the Trump movement, to the forgetting of history, to narrative erasure, to fake news and those kind of propaganda techniques which we associate with the Soviet Union, the Trump movement has been doing exactly the same thing.”

The propaganda in the US, says Badham, is “white, patriarchal, heteronormative vision of America and the American past and these cultural symbols of what Americanism means”, which Trump exploited: flags, guns, eagles, Harley-Davidsons and cookouts, a “warrior vision of suburban men wearing fatigues picking up guns to defend their families. An impossible masculinity, quite performative and, of course, screamingly camp”. 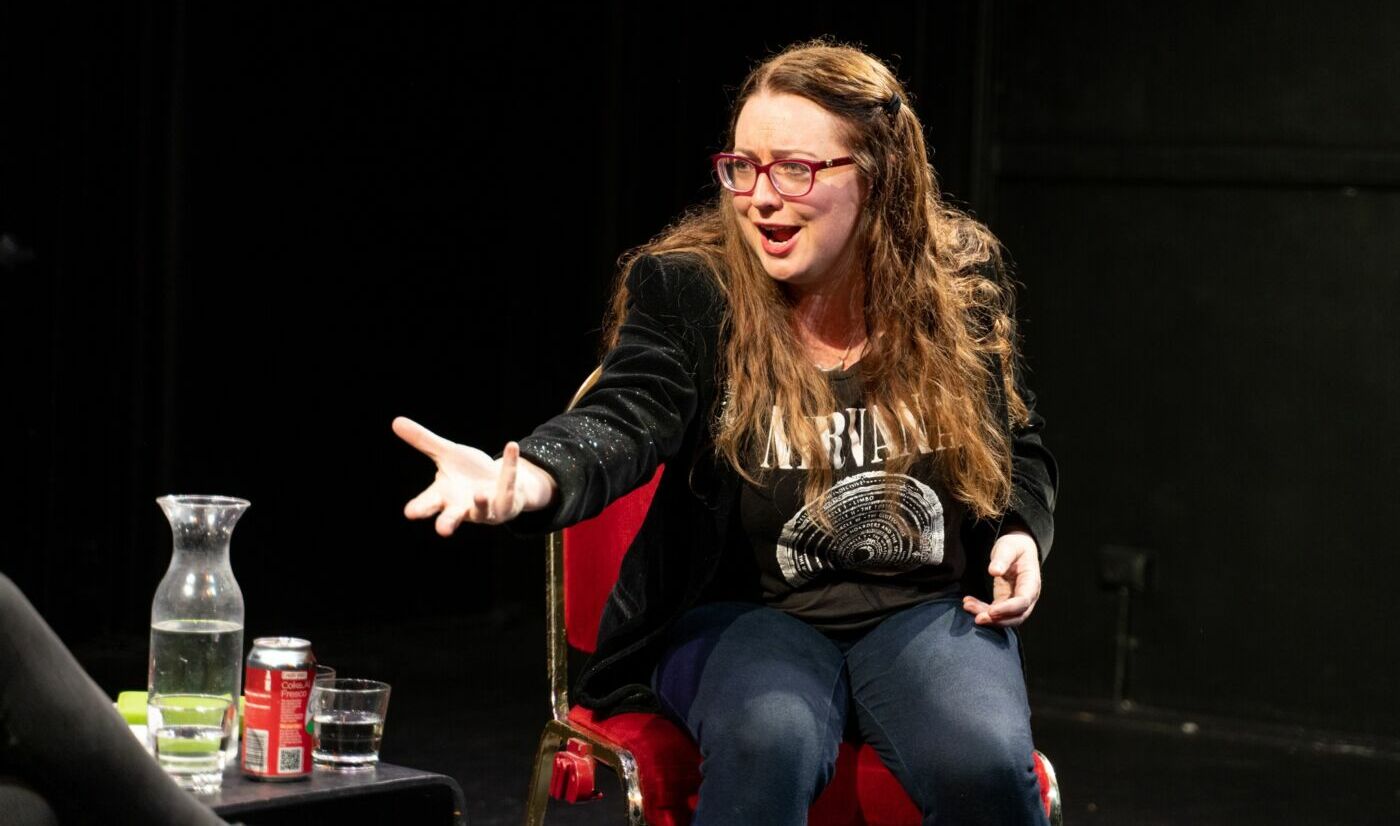 Actor Megan Wilding, winding up a stint in hotel quarantine in Perth to take part in the production, started rehearsals over Zoom. Wilding previously starred in Badham’s feminist romcom Banging Denmark for Sydney Theatre Company in 2019.

“I love Van’s chaotic, intelligent mind,” says Wilding, “and how she is able to translate that into a script that has such a rhythm. As an actor I love trying to grab that and run with it, and as a writer I just think she is so clever and feeds so much into her work. She’s right on it.”

Wilding says Badham has “nailed” the “hyper-political wing man” character of Squealer. Wilding said she found the events of January 6 difficult to grasp at the time, but “I think it’s very close to something that could happen here, which scared me”.

“Sometimes I think it’s a bit more sinister here because we’re not as vocal as America,” she says.

Director Emily McLean says the abuses of power among the animals begin almost immediately. “The really clever thing that Van has done with the adaptation is she has taken this book that a lot of people are reverent about and kept its heart and message about power – and basically it’s still a critique of people who use their power badly – but she has set it today, so the pigs use all the tools available today, and the propaganda machine that is the internet is used really powerfully.”

McLean said Orwell was critiquing his own side of politics, “and I really have a lot of admiration for that. That’s something we could all do with more of”.

Badham says she is often assailed by “crazy Right wingers” on the Internet, claiming Orwell’s works as articles of faith and as evidence that the Left have brought about the totalitarianism depicted so starkly in his novel 1984, which Orwell published in 1949.

“George Orwell was a lifelong socialist,” says Badham. “Animal Farm was part of an opus of work that illustrates his anxiety about what he saw of the Soviet Union, which was a revolution betrayed … and how ordinary people, symbolised by the animals, who are desperately grasping at a better life, are manipulated into creating this society which hurts and exploits them even more.”

The events of January 6 in the US, meanwhile, were “a coup, an attempt to overthrow the democratically elected government of the United States, for Trump to maintain power. You had all your dorky suburban mums and dads participating in that. The context is slightly different: the people who turned up to January 6 are not an oppressed underclass; they were bored middle class”.

Badham quotes the “never-Trump” conservative commentator Tom Nichols, who has written that the events of 2020-21 in the US were “not the revolt of the oppressed, but the insanity of a bored lumpen-bourgeoisie”. 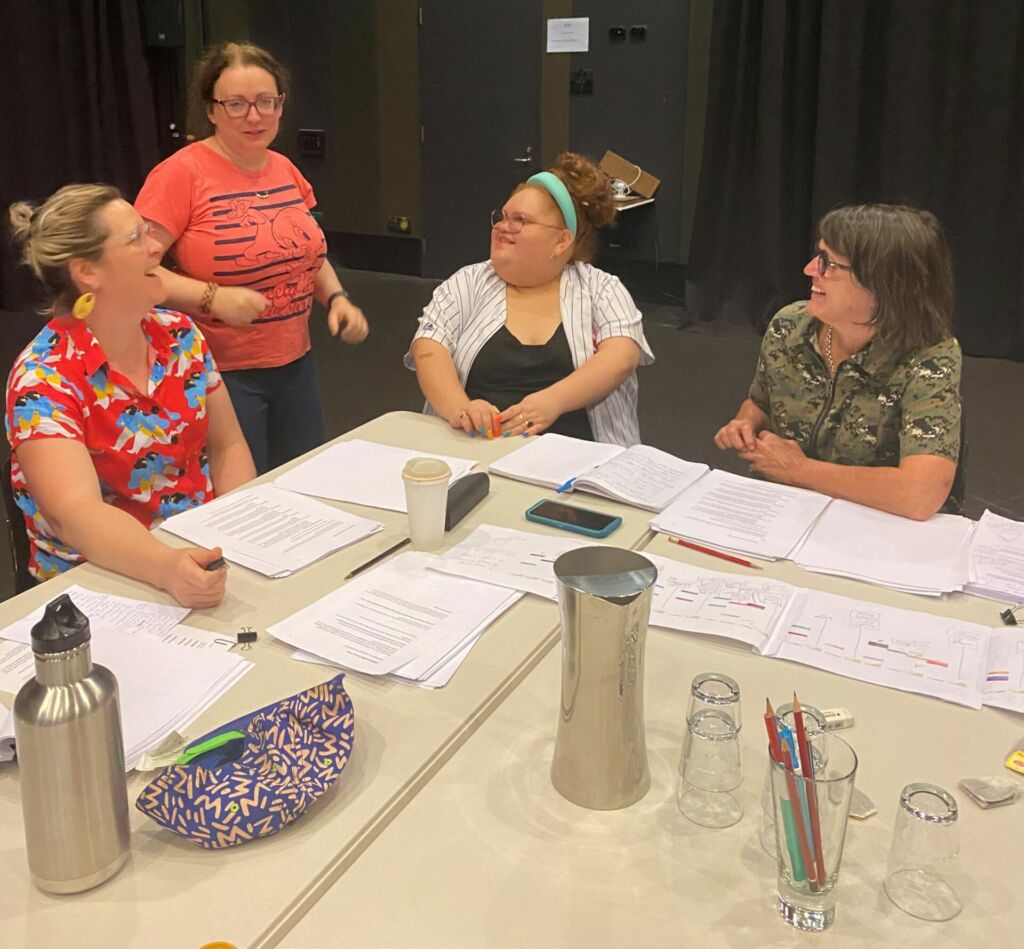 The cast and crew of Animal Farm at Black Swan State Theatre Company during Creative Development in March 2020. Image supplied.

In Animal Farm, Boxer the cart horse says that if the tyrant leader Napoleon says something, it must be right. Do the QAnon community Trump supporters believe in propaganda? How much is cynical manipulation?

“It’s both. The propaganda only works if people choose to believe it. They want it to be true. They want to believe in this idealised version of their own culture.”

“It’s a tribalism, and it’s finding a culturally recognisable collective. Their identities are frail and part of the appeal of the Trump movement is it gives them a cultural identity they can understand and is accessible to them.”

Women in this movement are “explicitly anti-feminist” because it “upends this Americana vision they have” about how they are supposed to behave and look. There is also a “performative whiteness”, with Trump speaking in euphemisms to the fear that white culture will be ghettoised, without being specifically racist.

“It makes them incredibly vulnerable to manipulation,” says Badham. “It’s like a drug. The purity of what they get offered is corrupted the longer they stay in it. You end up marching on the Capitol to overthrow the government.

“That’s my adaptation of Animal Farm: the animals present a particular kind of mindset where idealism and hopefulness get manipulated by very cynical, bad-faith actors into building an entire society that crushes and restricts them.

“That’s certainly what is going on with the Trump movement in the United States.”

Animal Farm plays the Heath Ledger Theatre from 2 to 24 October. Van Badham’s book QAnon and On: A Shocking History of the Internet Conspiracy Cults will be published by Hardie Grant on 17 November.