“It’s in four movements, and it was unusual. I wrote it this year [before coming here] so I had to imagine the sense of place before I actually saw the place.”

“I made it more human, kind of emotional, rather than about landscape, because landscape is not what I write about, it’s not my area of expertise. I respond much better to human emotion and feelings and sense of something unexpected or unknown… I like the mystery of not knowing,” she says. 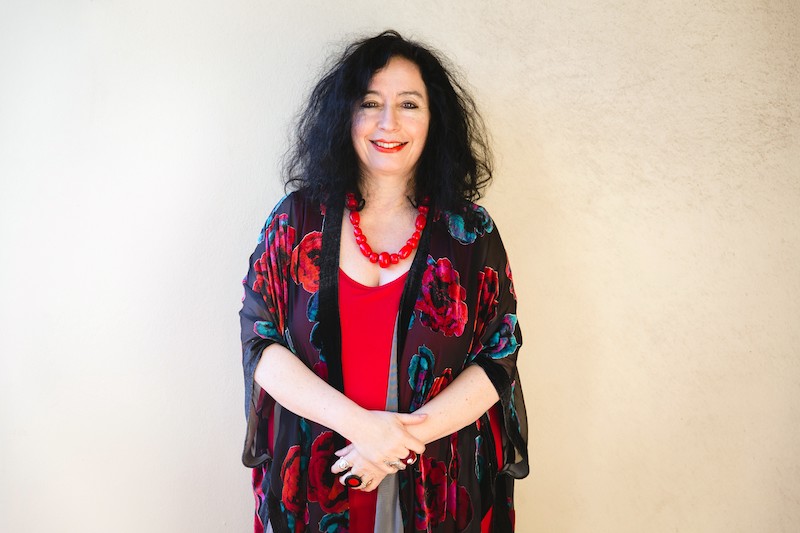 Red Centre Suite will have its world premiere on Friday 13 May in a concert called Elena in Red, which will feature another world premiere –Bullen Road 2016 by Jon Rose and Hollis Taylor, a contemporary classical piece involving bird song.

Markus Kuchenbuch, Artistic Director and Orchestral Leader of the ASWCO, first met Kats-Chernin in 2019 at the Bermagui Four Winds Festival. Kuchenbuch spoke to the much-loved composer about coming to Alice Springs, working with young people, and maybe undertaking some teaching and workshops.

“Markus asked whether I’d been to Alice Springs. I said, ‘No, I would love to come! I would love to see the desert!’” says Kats-Chernin. “That was three years ago, before COVID, when we didn’t even know we would have lockdowns, but we kept the dates. Markus has done everything to make it work, which is amazing!”

Kats-Chernin explains that when she composes she taps into the subconscious a lot, responding to concepts and ideas – in this case, the colour ‘red’ and the word ‘centre’. She decided the composition would be about a day in summer and would explore how that feels.

‘The first movement I wrote is called Noon. It is the third movement in the piece but I wrote it first. I wanted to write about heat, relentless heat, and blurriness of sound – as much as one can do it with the strings. There is this pattern, seven quavers in a bar – it keeps going, keeps going, keeps going… It’s quite meditative, almost trance-like. It was good to get into the piece from this ‘hotness’. I sent it to Markus the minute I had the movement, and everything else just fell into place!” 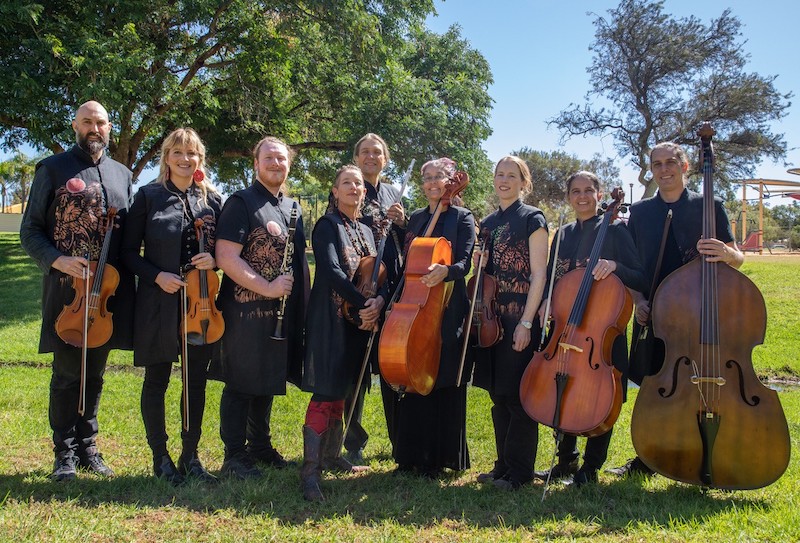 Kats-Chernin decided to begin the suite with Night Stars. “I’ve read about this explosion of stars. I hadn’t yet seen it myself, but I’d heard about it. So, I decided to start the piece with a sound of pizzicato. I also play along in a slightly different key, so I’m kind of abstracting it a little bit. It just felt like I wanted something gentle, magical, something sparkly and sprinkly, something light. That’s how I imagined the night: it’s like a waltz of the stars.”

A piece of music that has four movements should be contrasting in some ways, says Kats-Chernin, so when she is composing she asks herself, “What would be the next thing that I would want to hear?”

“So, when I thought about [the second movement] Dawn, I thought about the mystery of the day ahead; the mystery of a place that already has a lot of history. And, I thought the only way for me to work with that is with a very low register. I start with double bass and cellos, very slow. It’s almost like a ritual, with a sense of foreboding and mystery.”

In this movement, Kuchenbuch plays alto flute – chosen by Kats-Chernin for its earthy, seductive quality. Dawn leads into Noon, with the final movement Sunset focussed on playfulness and lightness.

“Again, I could’ve gone landscape… but it’s not me. [Instead] I responded to the feeling of what people do sometimes before they go to bed, especially children – they play games, they talk, so it’s more playful. I didn’t want a heavy piece, I wanted it uplifting, fast and energetic. I like vigour in music and after the trance-like movement of Noon, I felt the Sunset was like a release.”

The process to performance has been swift, with Kats-Chernin sending music to Kuchenbuch to be immediately rehearsed the following day. Meeting the orchestra for the first time this week, only days before the premiere, has allowed her to actively explain and interpret the work with the musicians. Kats-Chernin describes the ASWCO as “a very good group to work with. They understand the language I use, which is not always easy, because it is sometimes beyond the technical. They are also very receptive and they were smiling, so they were not unhappy with me, so I’m happy!” she says, with a laugh.

The ASWCO members were equally chuffed: “With Elena here, the music really jumps off the page,” says Sarah Dick (cello). “[She made] changes on the fly – it was really cool!” adds Caleb Keane (clarinet).

While in Mparntwe, Kats-Chernin conducted a school workshop. One of the students summed up the general response to Kats-Chernin’s visit: “That was awesome!”