The theme for the 2022 Canberra International Music Festival is ‘Pole to Pole’, and some of the most famous poles in the country are housed at the National Gallery of Australia. Jackson Pollock’s masterpiece of abstract expressionism, Blue Poles, also known as Number 11, 1952, was purchased by the NGA in 1973. Its price of $1.3 million – a world record for a contemporary American painting at the time – caused howls of outrage against the Whitlam government’s perceived profligacy, inspiring a national debate between those who admired the painting and those who thought their toddler could have painted it.

This Sunday, as part of the festival, a concert will be performed at the NGA inspired by Blue Poles, and by the broader cultural impact of American modernism. The featured performers are the Alma Moodie Quartet, a relatively new string quartet featuring four of Australia’s finest younger string players – violinists Kristian Winther and Anna Da Silva Chen, violist Alexina Hawkins and cellist Thomas Marlin – who will perform Ruth Crawford Seeger’s Andante movement from her String Quartet, John Cage’s infamous 4’33, and the world premiere of a new string quartet by Australian composer Brian Howard, entitled Blue Poles.

Hugh Robertson spoke to Winther via email about the origins of the Alma Moodie Quartet, the repertoire they most enjoy playing, and whether a composer can recreate a painting through music. 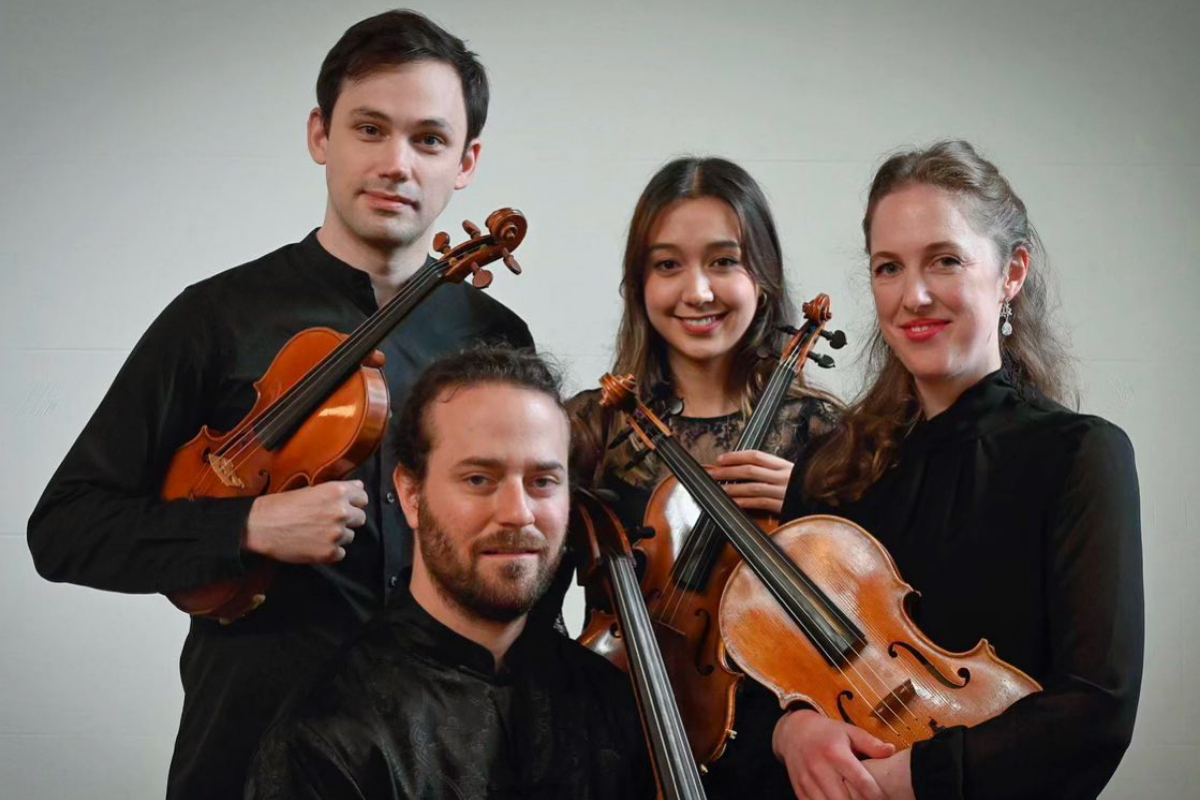 How did the Alma Moodie Quartet come together?

We wrote to each other to see whether we would like to play together as a quartet. We did want to, so we did it. The story could not be more boring, I’m afraid. We did make up a bunch of fake origin stories to tell you instead, but they were either unfunny or a bit coarse.

Who was Alma Moodie?

Alma was an extraordinary Australian violinist, who counted among her performance partners many of the great players and composers of the first half of the 20th century, including Bartók, Hindemith, Krenek and Reger. She also premiered dozens of new works, and was immensely popular, appearing annually as soloist with the Berlin Philharmonic for over a decade, as well as in England and throughout Europe. Sadly she was never invited back to Australia, and died during World War II. There’s an excellent book about her by Kay Dreyfus, Bluebeard’s Bride – please write to the publisher and tell them to print some more copies because there are none left to buy.

Your repertoire at the festival has been rather varied, from Haydn to Brian Howard. Do you enjoy the challenge of performing a wide range of repertoire?

It’s crucial for all quartets to play everything from Byrd to Adès; generally speaking as musicians if we are not playing something which is challenging it’s a sign that we’re not playing the right music. Perhaps what is most important in classical music today is choosing what NOT to play. Martin Scorsese made the interesting point that Marvel films are not really cinema, that they are more like rides at an amusement park. To some degree I feel that way about orchestral performances of film soundtracks. Of course those events should exist, but perhaps not at the expense of taking a valuable orchestral performance slot away from a composer like Bruckner, Gubaidulina or Bacewicz. Music of genius should not miss out on a performance because of James Bond or Harry Potter, and frankly it’s weird that we’ve gotten to a point in our culture where we even have to write that sentence. Having said all that, I am going to see a Marvel film tonight.

How has your Canberra International Music Festival experience been thus far?

We’ve been lucky to play a lot of incredible music for wonderfully appreciative and warm audiences: Schubert’s D Minor String Quartet, D810, Bartók’s Fourth String Quartet, and one of Haydn’s Op. 20 divertimenti. And more still to come. We’ve heard the brilliant Neeman Piano Duo and New Zealand String Quartet in a few concerts. There’s so much to see, and Roland’s [Peelman, CIMF Artistic Director] programming is sharp as ever. 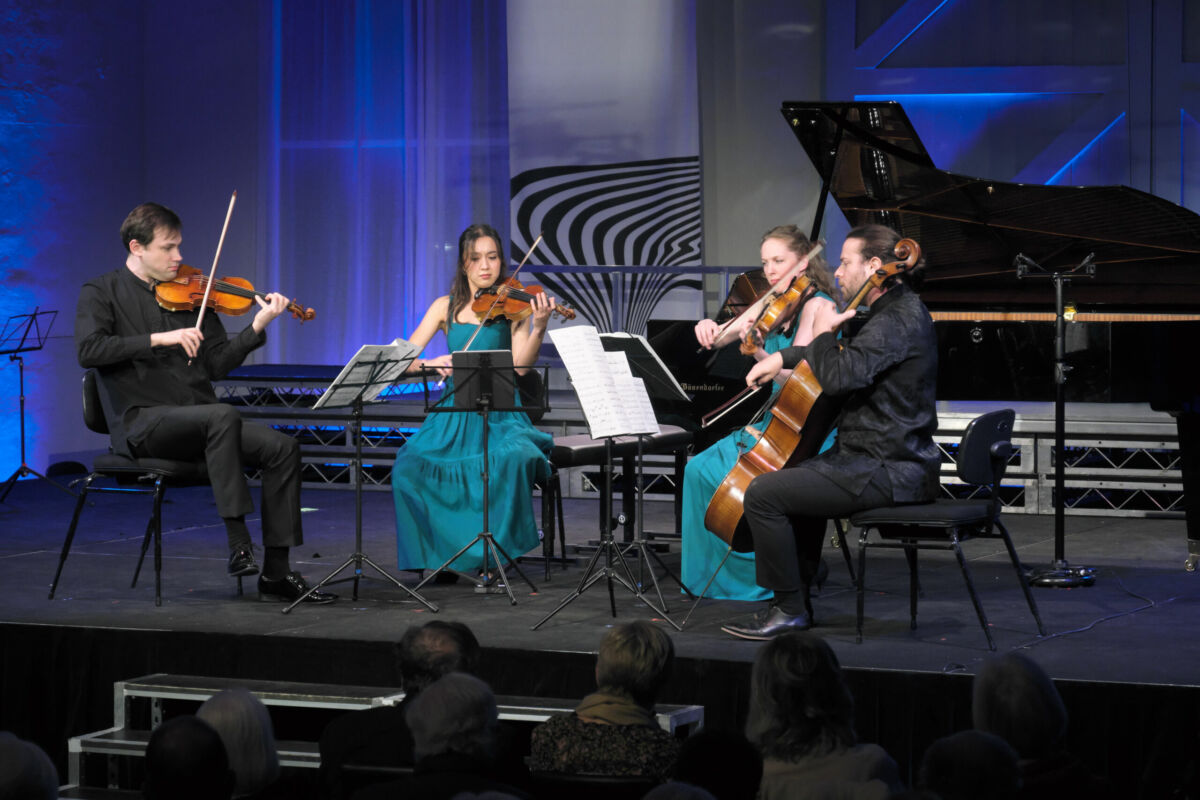 Is there an underlying philosophy to the works you choose to perform? What is the quartet’s raison d’etre?

We all have different reasons for playing string quartets, and we are all at different points in our relationship with the genre. But we are all especially committed to forgotten works of genius, particularly by composers who Alma was associated with: Bartók, who is a personal favourite of mine, and Reger, whose five string quartets are nearly forgotten.

The blurb for this Blue Poles concert says, “Hear how American modernism found a lasting presence in the new city of Canberra”. Have you had much time to sit with the Jackson Pollock painting? Can you feel any of it in Howard’s piece?

I grew up in Canberra, so I’d see Blue Poles at the gallery I guess at least once a year. My own view is that nobody can recreate the feeling or essence of a painting in music, but that a composer can only create a personal reaction to one and share that musical form with an audience, perhaps turning it into something different, sometimes greater (Reger, Rachmaninov and Mussorgsky come to mind).

Arguably Ruth Crawford Seeger’s String Quartet (which we play part of in the same concert) is closer to Pollock, in that its raw lines and blocks create visceral emotions and musical “poles” in spite of its dissonance and abstractness. But undoubtedly some people will feel that Brian Howard’s piece evokes the painting more strongly.

Finally, I don’t know if I have ever heard of a quartet performance of John Cage’s 4’33. What do you think a quartet brings to that work?

Any “performance” of the piece is not really about the players necessarily, but about the time, the place, and the simple awareness of silence or noise in the space. But in addition to Cage’s focus on sound, having Pollock’s Blue Poles in the background during 4’33 raises the interesting question of what role a spectacular two-by-five-metre visual cue might play in Cage’s creation!

Blue Poles takes place on Sunday 8 May at 2:30pm at the National Gallery of Australia. More information.

Guitarist Sako Dermenjian and violinist Anna Da Silva Chen tell us about the pleasures of Piazzolla and how they're challenging the idea that the composer is ‘not serious enough’.