Our playlist for July features music from Tasmania and from composers with strong ties to the island state. I was quite excited to dig into Tasmania’s music scene, which I’m less familiar with, and uncover some new favourite artists. I think I’ve succeeded, and hopefully am bringing some new music to your ears as well. Huge thanks to Music Tasmania and Australian Music Centre for great jumping off points for my research.

While streaming is a great way to discover new music – purchasing albums or merch is an even better way to support the artists you love. Visit the Merch Table for this month’s playlist.

Maria Grenfell is familiar face to followers of this playlist, and her Foxtrot for Horn and Piano is a fun and upbeat romp, and especially welcome in this month’s selection. For a direct contrast, the Hobart band Philomath brings subtle layers of sound to create an immersive ambient sound world in their track, Levent. And, Ron Nagorcka’s Artamidae: Australian Magpie grounds us in the natural world before broaden to all manner of sound, instrumental and electronic.

We have a number piano works this month including Michael Kieran Harvey’s delicate and rhythmic Black Bowl, and Simon Barber’s crystalline and expressive Interpolationen (both performed with precision by Kieran Harvey), as well Thomas Misson’s slowly unfurling Nocturne performed by Jack Barnes.

One of the joys of this month’s playlist was rich variety of the styles present in Tasmania’s music scene. Beneath the Surface is an improvised work by Emily Sheppard (recent recipient of ABC Fresh Start Fund), Anja Tait and Anne Norman. Recorded in tunnel, the recording gives a unique sense of space and depth – I’d highly recommend the full album.

Another ABC Fresh Start Recipient is Jabra Latham whose work The Bright floats on an exquisite rhythmic foundation lending momentum and allowing for some beautiful melodic interplay. Mia Palencia eschews the momentum for a more gestural expressionism in her crooning jazz work, Nightingale.

And I can’t finish talking about the playlist without tipping my hat to one of the most influential works for me as a young composer, Russell Gilmour’s Seven Things I’ll Do Tomorrow – an album I had on repeat for most of my Bachelor degree. The Gilmour Ensemble’s instrumentation lends itself to beautiful textures and colours, which lets Gilmour’s minimalism truly shine.

I hope you enjoy some of the new faces and sounds on the Aussie Art Music playlist this month – It’s been an exciting one to research and construct. If you’re looking for more to listen to, the full Australian Art Music Archive has also been updated on Spotify (now over 70 hours of music!).

Join me next month when we look at the shiny and new. 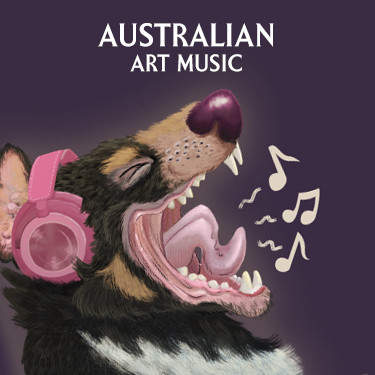 Cameron Lam spotlights the violin and its repertoire, from solo works to concertos, players and composers in this month's playlist of Australian art music.

October’s playlist digs into the unique repertoire of the guitar, showcasing Australia's outsized contribution the repertoire with releases from 1996 all the way to this year.

Cameron Lam's playlist for August shows composers responding in different ways to the disruption and isolation so many of us are experiencing right now.