Although Maria Callas died over three decades ago, she remains an icon: as a supreme singing-actress; as a celebrity, and as a woman of great style and elegance. The epitome of the operatic diva, the American-born Greek soprano is recognised as a singer who defined, and even redefined opera in the 20th century and she has never lost her place among the world’s top-selling classical artists. 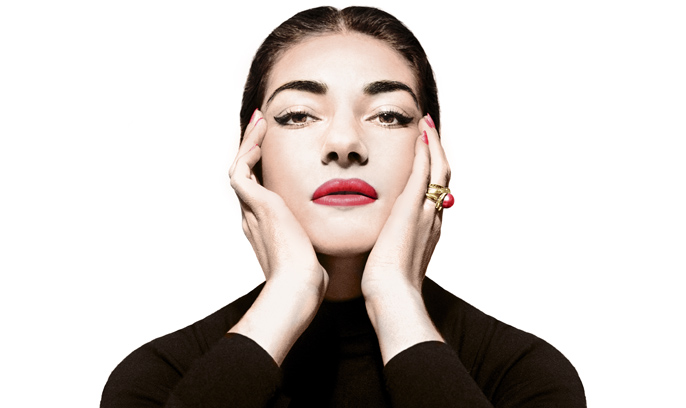 In 1949 Callas was 25 when she recorded a few bits of Isolde, Norma and Elvira in I Puritani – a role she’d just taken over in despite the fact that she was singing the part of Brünnhilde at the time! Her Liebestod (sung in Italian), recorded for Cetra, has long been a secret pleasure of Callas fans and thanks to Warner now sounds clearer than ever – what a pity she never recorded a full Wagner opera!

The 1951 performance in Mexico City featured Callas hitting her top E Flat in the triumphal scene – one of the most legendary moments in opera history! As one commentator has written: “The first time I heard the E flat my jaw dropped. I could not describe the feeling I had that time. I just closed my eyes and thank the Creator above for giving the world Maria Callas, the greatest soprano in living memory”. The 1955 Studio recording in the new Warner Remastered set also shows her extraordinary dramatic instincts in the role.

The 1953 recording of Donizetti’s Lucia di Lammermoor is a benchmark in many ways. Her first recording with Giuseppe di Stefano (perhaps her closest colleague who went on to become her final recital partner and, some say, her final lover) and Tito Gobbi – if not the most refined voice, probably the finest dramatic baritone of his time. Callas had debuted in the role in Mexico City the previous year and soon proved that a weightier, more dramatic approach would work in a role more often the preserve of coloraturas and soubrettes. Her Mad Scene is an object lesson in making the text as important as the music – note-spinning was never for her!

Callas in costume for Tosca

Possibly the most famous opera recording of all time. With Di Stefano a heroic Cavaradossi (the voice was at it glorious best from 1950 to 1955) and Gobbi a suave, demonic Scarpia, the recording has never been surpassed. Victor de Sabata conducts a taut reading while allowing Callas every opportunity to explore the role. Her bel canto experience allows for a more refined interpretation in the love music than many a heftier voice, yet the Act II confrontation with Scarpia takes no prisoners. She even sings the “E Avanti a lui tremava tutta Roma!” as intended (rather than speaking it as many resort to). Tosca went on to bookend Callas career – she sang it in Greece in 1942 at the age of only 21 and 23 years later it was the last role she performed at Covent Garden in 1964.

With 45 performances under her belt, Callas was already an experienced Norma when she recorded the role for the first time in 1953. Slimmed down, yet still vocally in peak condition, it represents the very finest bel canto singing you are likely to hear – the diminuendo on the top C in the first Adalgisa duet is breath-taking. It went on to be the role she performed more often than any other (89 performances), with Casta Diva becoming something of a theme song for La Divina (though some might argue Vissi d’Arte from Tosca defines the Callas life-philosophy more intimately). She would go on to record it again in 1960 – an even more intense experience (and a finer supporting cast) though the voice shows more strain.

Possibly the greatest recital disc of all time and an opportunity to hear Callas’ thoughts on some of the roles she performed less often (and in some cases not at all). The  storytelling is remarkable – from Manon Lescaut dying in the deserts of Louisiana to a commanding Turandot demanding her ancestor be avenged, this recital runs the emotional gamut. The use of her bel canto technique to decorate the vocal lines makes many of her interpretations uniquely detailed. If you can listen to her Sì. Mi chiamo Mimì at not be moved at the sheer artistry then maybe opera isn’t for you – and she never sang the role on stage!

Callas as Violetta in La Traviata, 1958

Callas sang 63 performances of La Traviata – her second most performed role – and there are seven complete recordings, six of which are live. Cetra recorded her in 1953 – already a fine interpretation after 25 stage appearances – but Callas fans frequently cite the 1958 Lisbon Traviata as the Holy Grail amongst Violettas. The performance at Teatro Nacional de São Carlos in the Portuguese capital circulated in an unauthorized recording made by a cast member during a live performance, and despite the amateur quality, quickly became a collector’s items among Callas afficionados. So legendary is the performance it even became the theme and title for Terrence McNally’s Broadway play The Lisbon Traviata – a salient tale for those who become too obsessed with opera…

Cherubini’s Medea was another Callas signature role – for some, the Greek soprano was the very epitome of the unhinged, slighted wife and mother. In 1958 Callas arrived in New York and lunched with Rudolf Bing, General Manager of the Metropolitan Opera. They discussed Traviata, Tosca and Lady Macbeth for the following season after which Callas began a North American tour culminating in two performances of Medea in Dallas. Immediatley before the first performance Callas received a telegram from Bing effectively dismissing her because she hadn’t agreed to the repertoire he was offering. She was furious and a lot of that comes across in the performance of Medea, fortunately preserved in good sound. The studio Medea is good – this live Medea is great.

Callas in concert in Hamburg, 1962 – another rare filmed moment

One of the great operatic regrets is that so few of Maria Callas’s performances were ever filmed. A gala concert recorded at the Royal Opera House, Covent Garden, in November 1962 shows Callas in front of an audience in a live television broadcast. Fans who were concerned that she was giving up the stage because of vocal problems or to be with Aristotle Onassis were reassured. She sang Tu che le vanita from Verdi’s Don Carlo but more tellingly two arias from Carmen – the Habanera and the Seguidilla. Listening to her Carmen, perhaps opera’s saddest ‘what might have been’ remains the remarkable mezzo that could have graced the 1960s and 70s.

Maria Callas’s final triumph was in Puccini’s Tosca at Covent Garden in 1964. In a new production specifically mounted for her by Franco Zeffirelli and co-starring her long-term colleague Tito Gobbi as Scarpia, Callas redefined yet again the role of the diva forced to take matters into her own hands to save her lover who is being tortured. Dedicated fans queued for 48 hours for standing places and tickets were allegedly exchanged on the black market for £50 (over $1000 today). ITV broadcast the entire Second Act on The Golden Hour to an audience of over one and a half million viewers in London and the performance now represents all that remains on film of Maria Callas in a stage role.

One of the 20th century’s most legendary and enduring icons, Maria Callas captivated audiences worldwide with her vivid and passionate performances. Maria Callas: Pure features Callas in a glittering selection of opera favourites that showcase her unique voice and her heart-breaking portrayal of tragic heroines, now available from Warner Classics.

Warner Classics is now the guardian of Maria Callas’ official recorded catalogue, and is also proud to announce the release of CALLAS REMASTERED: The Complete Studio Recordings.

This 69-CD deluxe box set contains all the studio recordings that she made for both EMI/Columbia and the Italian label Cetra between 1949 and 1969. Each recording has been painstakingly remastered in 24-bit/96kHz sound at Abbey Road Studios using the original tapes, on Bowers & Wilkins 802 Diamond speakers, and the entire collection has been curated with the greatest of care. The 26 complete operas and 13 recital albums contained in the box will also be made available as separate releases.

Conceived as a true collector’s edition, CALLAS REMASTERED presents each individual opera or recital CD in its original artwork. It also contains a 136-page hard-back book with essays, a biography and chronology, rarely-seen photos and reproductions of revealing letters written by Maria Callas, Walter Legge and other EMI executives. The opera librettos and aria texts are provided on a CD-ROM.

Presented by Limelight Magazine in partnership with Warner Classics

★★★★☆ Engineers at Warner Classics have striven to address some tricky recordings. So have they succeeded?

The Albanian soprano who’s been compared to Callas talks about Violetta, the evils of false-marketing and why Zazà made her cry. Continue reading Get unlimited digital access from $3 per month Subscribe Already a subscriber? Log in

Chamber Recording of the Year 2015

Charles Burney dismissed them as vile, but William Lawes’ Royal extravagances are most definitely viol. Continue reading Get unlimited digital access from $3 per month Subscribe Already a subscriber? Log in

With LP nostalgia now playing a major role in classical music purchases, we open our ears to a blast from the past. Continue reading Get unlimited digital access from $3 per month Subscribe Already a subscriber? Log in

Ahead of her performances in Master Class, the actor explains her preparation for the role of La Divina. Continue reading Get unlimited digital access from $3 per month Subscribe Already a subscriber? Log in