As Russian bombs continue to rain down on Ukraine, musicians around the world are performing to raise financial support for the Ukrainian people. On 31 May, a fundraising concert will take place in Canberra, featuring Ukrainian folk music and works by Brahms, John Taverner and Valentin Silvestrov among others.

Jointly presented by the Canberra International Music Festival, the Canberra Symphony Orchestra and the ANU School of Music, proceeds will be donated to the Australian Red Cross Ukraine Crisis Appeal and Doctors Without Borders.

Roland Peelman, the Artistic Director of the CIMF, instigated the concert. Asked by Limelight why he initiated the idea and how important he believes the concert is, he says, “We are doing it to raise money of course – in the scheme of things [it’s] perhaps insignificant, but everything helps. The broader reason has to do with the cultural roots. Music from Eastern Europe, the Russian, Ukrainian, Georgian traditions may seem at the periphery of Europe, but they do form an integral part of European culture. We never imagined that this type of crude aggression, not just between neighbours but between cousins, could still happen in this day and age. Music reminds us of what we have in common, the resilience of the human spirit, of hope and of the simple fact that Russia may have destroyed churches or opera houses, but the music will live. And for the first time we are actually becoming aware of Ukrainian music as opposed to Russian.”

The line-up includes Ukrainian bandura player and vocalist Larissa Kovalchuk; didgeridoo virtuoso and vocalist William Barton, who joins Miroslav Bukovsky and Friends; Australian tenor Andrew Goodwin; Kim Cunio, Head of the ANU School of Music; and Peelman himself, who plays piano and conducts. Ensembles include the CSO Chamber Ensemble; an augmented ANU Chamber Choir directed by Peelman; and the ANU Orchestra, conducted by Max McBride with guests from the CSO.

Larissa Kovalchuk, who was born in Ukraine and is now based in Australia, spoke to Limelight about the concert. 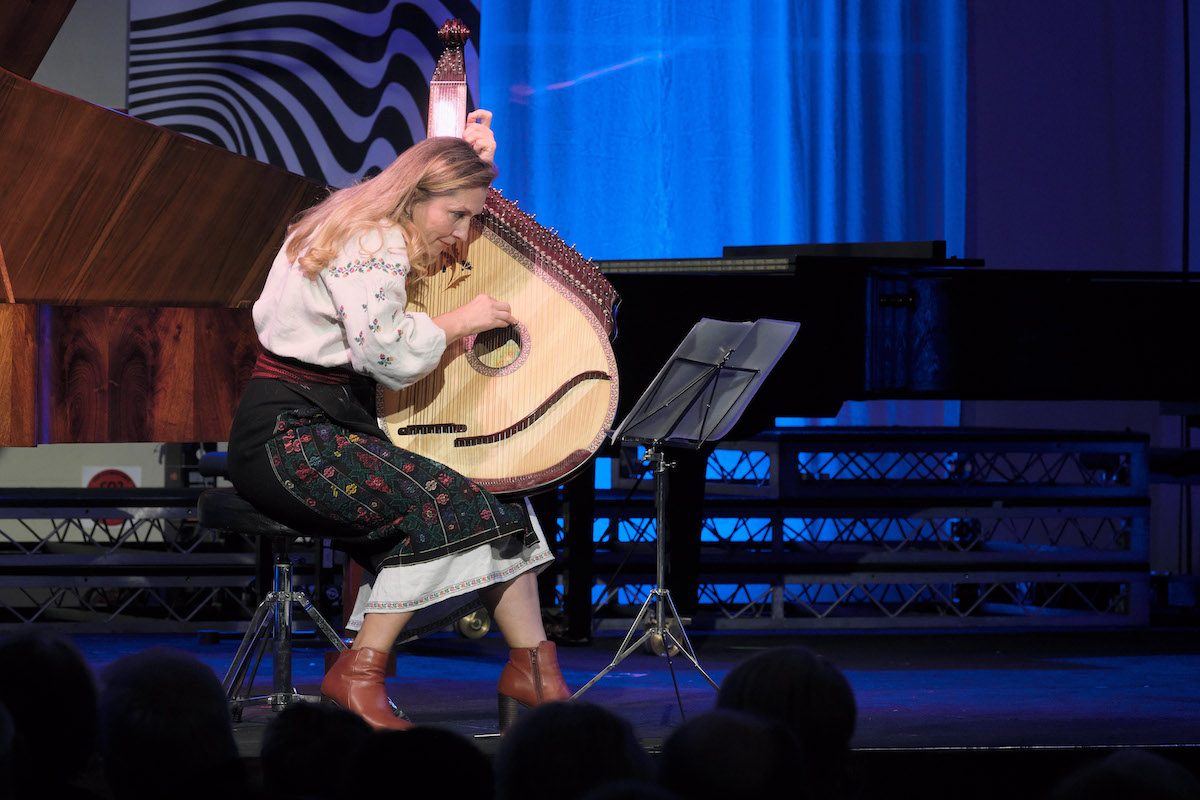 I believe you were born in Kyiv into a family of visual artists and musicians. Has music always been part of your life?
I was born into a family of a visual artist and a musician. My mother had a perfect pitch, played on a couple of instruments and had a very beautiful mezzo- soprano voice. My father is a professional musician, a choir conductor. He was only nine or ten years old when he made his first violin from the scrap wood he was able to find on a field while looking after the flock. When I was growing up,  we often had family concerts where all neighbours would come together to sing traditional songs.

Ukraine is a very beautiful and wealthy country which has suffered from Russia for many centuries. Ukrainian language, culture, religion, and art were always suppressed. My Dad’s family was displaced from their homes in Lemkivshchyna (a Carpathian region of Ukraine) in 1947 and taken to the Ternopil region and left in the middle of a field in winter with no belongings or nowhere to go. They were still lucky as most of their villagers were sent to Siberia and they never came back. This was the so-called Operation Vistula.

During my student years at the Kyiv Conservatorium of Music, selected students were sent to showcase Ukrainian culture to European countries:  Germany, France, Poland. I was always followed by a person who was listening and watching my every step. This is because I was playing a Ukrainian national instrument and bandura players have always been prosecuted. (In the 1930s around 300 bandurists were executed). My bandura teacher also warned me not to attend any meetings and demonstrations in support of Ukrainian independence or sing patriotic songs at my concerts, otherwise I may not finish my studies successfully.

When did you come to Australia?
I left Ukraine in 1995. I have met my ex-husband in Ukraine on one my concerts and made a decision to move to Australia.

Is your family still in Ukraine?
My three aunties and my cousins are still in Ukraine and they are refusing to leave their homes. Only one aunty and her family temporarily found a refuge in Germany. My partner’s parents and his brother’s family are also in Ukraine. His nephews are in the army fighting for our homeland Ukraine.

Have you heard stories from family and/or friends about what is happening at the moment?
We are keeping regular contact with all the family members. It’s absolutely horrible what is happening right now. Daily air raid sirens became a normality, running to a bomb shelter at 2am is a part of our family’s daily routines. Of course it is nothing compared to what people go through in the areas of active combat. Bombings of apartment blocks, cultural centres, churches, murders of civilians including women, children and elderly, numerous war crimes… It is just surreal.

Do you know people who have already fled, or who are trying to leave Ukraine?
My best girlfriend fled to Poland with her 16-year-old daughter very early at the start of the war, but she recently returned back as it is relatively safe where she lives.

When you perform, do you usually play Ukrainian music?
As a classically-trained musician I like to perform a variety of music genres and styles. I am choosing my repertoire very carefully knowing the specifics of my instrument and my voice. Medieval, Baroque and Ukrainian classical music, music written for bandura and my own compositions and arrangements of Ukrainian traditional songs – this is the music that I usually perform at my concerts.

What will you perform at the Music for Ukraine concert?
I will be performing a variety of music pieces written by Ukrainian composers Myroslav Skoryk and Semen Hulak-Artemovsky, my own arrangements of Ukrainian traditional songs, and a prelude in E minor by JS Bach.

This must be a very personal concert for you, how do you feel about it?
I look forward to sharing my music with the Australian audience to help raise awareness and solidarity with my homeland Ukraine in this difficult time.

The fundraising concert Music for Ukraine will be performed at Llewellyn Hall, ANU School of Music on 31 May. More information here.