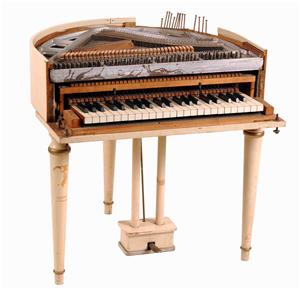 This small modified keyboard instrument invented by Percy Grainger, Australia’s most eccentric composer (1882-1961), is tuned in sixth-tones to produce a microtonal effect of an even, gliding scale. It was one of several so-called “free music machines” that Grainger developed throughout a lifetime of experimentation (we’ll encounter more in the pages that follow). Several of his instruments are on display at the Grainger Museum in Melbourne. 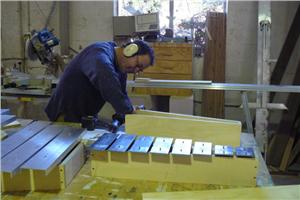 These resonant, metallic instruments were dreamt up by Paris-based Greek composer Iannis Xenakis (1922-2001) for his 1978 percussion magnum opus Pleiades. The 19-note microtonal metal instrument, similar in appearance to a marimba, was designed to bring out the clashing harmonic overtones between notes. The effect is clangorous and mesmerising.

In 2011, Australian percussion group Synergy performed Pleiades with six instruments they had built to Xenakis’s specifications. They spent months scavenging in scrap yards to source metal that could produce the right timbre. 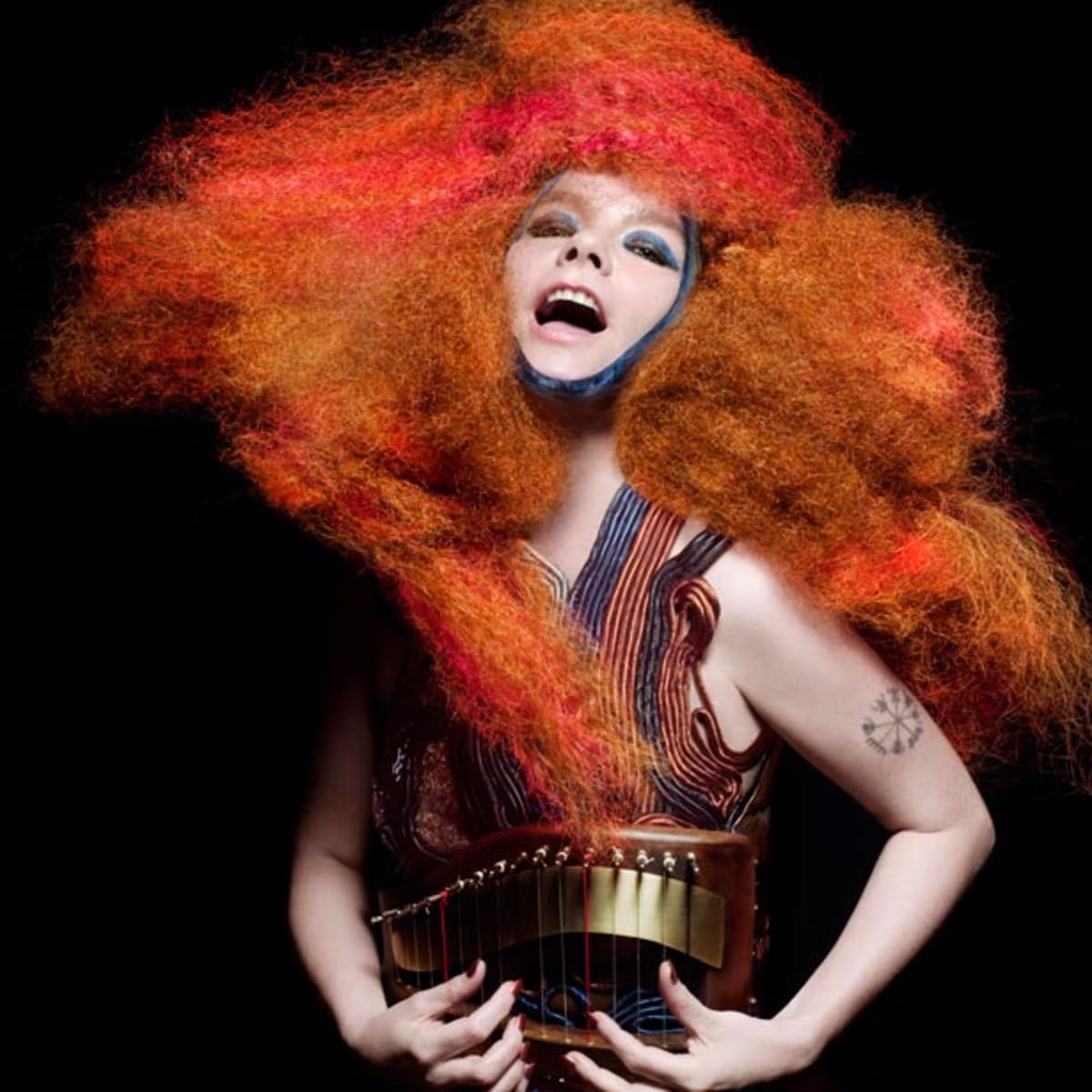 Ever the pioneer, Icelandic pop songstress Björk commissioned several new instruments for her latest album Biophilia, released in 2011. One of them, called the gameleste, is a cross between gamelan-like bronze bars and a celeste casing. British percussionist Matt Nolan and Icelandic organ craftsman Björgvin Tómasson collaborated on the project, and the result is a delicate, crystalline sound showcased on songs like… Well, Crystalline. 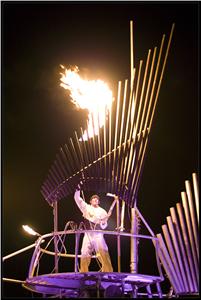 Stravinsky was no big fan of the organ – “the beast never breathes!” he said. But this one breathes fire. The first pyrophone was described in 1875 by the French physicist George Frédéric Eugène Kastner in an essay entitled Les flammes chantantes. Modern specimens are powered by controlled propane or gasoline combustion taking place inside each pipe.

The Pyrophone Juggernaut, which has toured to Sydney, Brisbane and Perth, is the world’s largest multi-octave, hand-operated fire organ. Developed by Hubbub Music out of recycled car parts, it is 10 metres high and generally requires five performers to tame it. 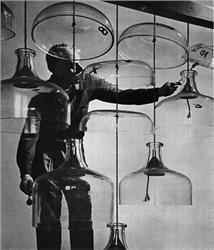 “I am not an instrument builder,” said Harry Partch (1901-1974), “only a philosophic man seduced into carpentry.” The American iconoclast developed many unusual instruments to realise his unique sound-world based on a 43-note octave, and they sound like things you would find in a Lewis Carroll nonsense poem: the Quadrangularis Reversum, the Harmonic Canons, Spoils of War (actually a whole arsenal of instruments), Chromolodeon, Marimba Eroica, Zymo-xyl… And the list goes on.

The Cloud-Chamber Bowls is a set of percussive pyrex bowls first built around 1950 using cloud chamber carboys suspended in a frame. It is played on the edges and flat tops with small soft mallets to give a bell-like tone, and each bowl has at least one inharmonic overtone. When one of them breaks you’re in trouble: it is almost impossible to find an exact duplicate. 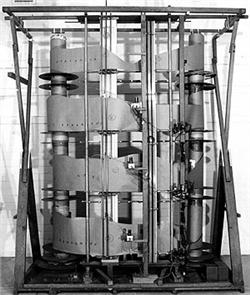 Another ripper from Australian composer Percy Grainger, who tinkered with developing what he called “free music machines”.

This electronic contraption, completed in 1952, uses paper rolls to operate a set of oscillators, producing what has been described as the sound of “four air-raid sirens going on at different pitches.” A far cry from the composer’s arrangement of Country Gardens…

As if the theremin wasn’t weird enough… Here it is in a supersized street-art version created by Robin Fox.

Like Léon Theremin’s less successful electronic instrument, the impossible-to-control terpsitone, its antenna senses the players’ body movements. Its appearance on the streets of Melbourne in 2011 was celebrated with music and dance collaborations featuring Chunky Move. Next stop: the pyramids of Giza? 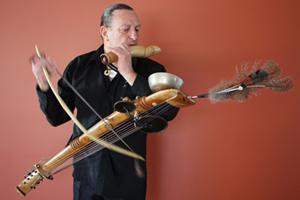 Australian composer, inventor and artist Colin Offord draws on traditional instruments of indigenous cultures, the Pacific Islands and Asia as inspiration for his own creations. With his series of mouthbows, he has developed his unique concept of an “Australasian sound”.

The mouthbow exists in many cultures, often as an archery bow used for music rather than as a weapon. Offord adapted this ancient model with added objects and resonators to expand its sonic and expressive possibilities: the result is a variety of elaborate stringed instruments he has named the Great Island Mouthbow, the Grand Jacaranda Mouthbow, the Leichhardt Gramophone Mouthbow, and so on…

This space-age “instrument” is based on Tesla coils, a kind of resonant transformer circuit developed in 1891 to produce high-voltage alternating current electricity. Here, two Tesla coils are used to make music, modulating the system’s break rate with MIDI data and a control unit. The name of the ensuing device is a play on words combining Zeus, the Greek god of lightning, and the sousaphone.

And what to do with all that raw electronic power? Why, play the theme from Mario Bros, of course!

Enterprising multi-instrumentalist Diego Stocco was expelled from music school for sawing his violin in half. Now that’s pretty much all the Italian sound artist does – so well, in fact, that he was handpicked by film composer Hans Zimmer to play his DIY Experibass (essentially conjoined string instruments) on the soundtrack to Hollywood blockbuster Sherlock Holmes.

Score for a hole in the ground

This sound sculpture, deep in the Kingswood forest near Kent in England, is played by nature, not by people. Jem Finer’s Score for a Hole in the Ground is a musical instrument with an ecological outlook. The horn-like contraption stands some five metres above ground, rising from a seven-metre well. Its gramophone-like head captures and amplifies the sounds of the forest in which it is “planted”. The well contains a water system creating random droplets that fall and strike a series of metallic structures below. The ensuing tones reverberate up the shaft of the instrument. A dew pond collects the water that feeds the instrument. The aural effect: calming.

Australia’s Garry Greenwood creates wind, string and percussion instruments of all sizes, made of leather using a wet moulding technique. His collection includes an “ostrich bowhorn” and “dragon didjeridu”, but the most impressive item by far is the 6-metre windform horn.

Peter Sculthorpe: The Sound Of Home

A visit with the composer who, in a career spanning six decades, has come to define Australian classical music.

The ACO perform two iconic symphonies for the first time, welcome an American soprano and debut a new instrument. Continue reading Get unlimited digital access from $3 per month Subscribe Already a subscriber? Log in

Raymond Hanson: one man and his music

A celebration of Australian composer Raymond Hanson in his 100th anniversary year. Continue reading Get unlimited digital access from $3 per month Subscribe Already a subscriber? Log in