When it comes to Halloween, there is nothing spookier than classical music. Whether operas about vampires, the iconic score to Alfred Hitchcock’s Psycho, a tone poem about Death himself summoning the dead from their graves for a Halloween party, here are the 13 scariest pieces of classical music for Halloween.

Mussorgsky: A Night on the Bare Mountain
The image of brooding, winged ghouls wreaking havoc on a mountain village under cover of night has terrified generations of young children in Walt Disney’s Fantasia. Inspired by Russian legend, Mussorgsky’s tone poem depicts the dark ritual of a witches’ sabbath. Sadly, it was never performed in his lifetime, but the arrangement by his friend Rimsky-Korsakov has become a concert blockbuster.

Marschner: Der Vampyr
The vampires in tabloids and teen novels today have nothing on the 19th-century European variety. The creatures of the night enjoyed a brief vampire craze in theatre and opera of the early 1800s, well before Bram Stoker’s Dracula emerged on the scene. Heinrich August Marschner’s grand opera Der Vampyr (1828) is based on a fragment of a novel by Byron, which was completed by the poet’s doctor. Lord Ruthven Earl of Marsden, a newly created vampire, has asked the Vampire Master for another year on earth before being dragged into hell for eternity. This he is granted, provided he can sacrifice three young ladies by the following midnight. Marschner’s sinister chromatic writing and chorus of witches and hobgoblins is enough to put Twilight to shame.

Saint-Saëns: Danse Macabre
Saint-Saëns’s creepy 1874 tone poem is a Halloween classic, depicting the revelry of the Grim Reaper at midnight every year at this time. With his cursed fiddle, Death summons the dead from their graves to kick up their heals until dawn.

Herrmann: Psycho Suite
Even without Hitchcock’s horrific shower scene burned on our retinas, Bernard Herrmann’s massed string dissonances in his score for the 1960 film Psycho instantly create an atmosphere of fear and disturbance.

Bartòk: Adagio from Music for Strings, Percussion and Celesta
Bartòk’s haunting, strangely delicate “night music” in the third movement of this 20th-century masterpiece is so atmospheric and suspenseful that Stanley Kubrick used it in the soundtrack to his horror film The Shining. Listen out for the unusual timpani glissandi effect (the low, other-worldly sliding bass) that underscores the unsettling mood.

Liszt: Totentanz
Liszt loved to flirt with death. The great Romantic was obsessed with all things macabre and diabolical, themes he explored in works including La lugubre gondola, Funérailles, Pensées des morts and the Mephisto Waltz). Totentanz (Dance of the Dead) is one of his most thrilling and schockingly modern compositions, from the strident, menacing opening to the truly diabolical virtuosity demanded of the solo pianist.

Schoenberg: Erwartung
For some listeners terrified of atonal music, almost anything Schoenberg wrote could have made this list. But the German composer’s one-act opera Erwartung (Expectation), an extended monologue for solo soprano, is one of his most confronting, intensely paranoid psychological experiences. A lone woman wanders through the woods at night searching for her lover. When she stumbles upon a tree trunk that she believes to be his dead body, a tirade of fears and emotions is unleashed. At the cruel climax of the work, she discovers the real body. It’s no walk in the park.

Rachmaninov: The Isle of the Dead
In the solemn opening strains of Rachmaninov’s symphonic poem, we hear plaintive oboe and gloomy clarinets as the composer depicts the sound of the oars of Charon cutting through the waters of the river Styx, bringing our immortal souls ever closer to the underworld. In short, a bit of a downer. 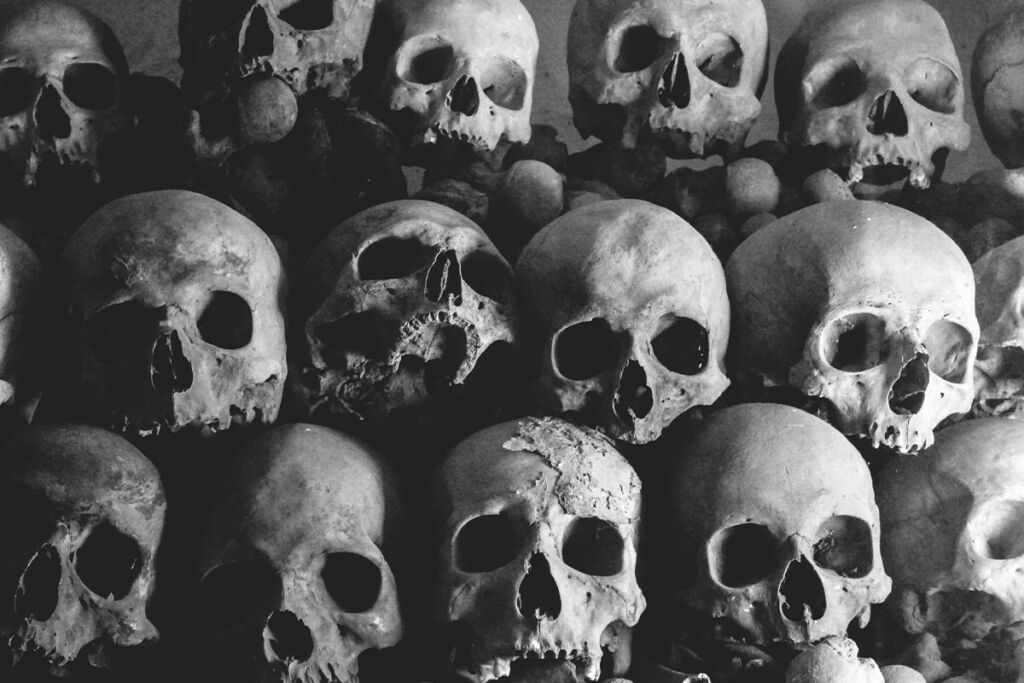 Caplet: The Masque of the Red Death
The harp isn’t usually associated with fear and death, most often relegated to music of a “nymphs and shepherds” variety. André Caplet, who composed many of the loveliest works for harp in the repertoire, took the instrument out of its comfort zone with some incredibly ethereal, chilling music based on Edgar Allan Poe’s short story The Mask of the Red Death. In the original tale, a prince holds a lavish masked ball, where he confronts a mysterious figure wearing a ghoulish mask and bloodstained robe. When the prince falls dead, his other guests forcibly remove the mask to reveal no solid form underneath: it is the spirit of the “Red Death” plague come to claim them all.

Bach’s Toccata and Fugue in D minor
Bach’s towering monument of organ music, with its deep sense of foreboding, will forever be associated with imagery of spooky old castles and a phantom’s lair.

Berlioz: March to the Scaffold from Symphonie fantastique
A drugged artist witnesses his own death in a vivid dream, in which he has killed his beloved and faces execution for the crime. He watches as an onlooker outside of himself as the guillotine blade falls (a single G-minor chord) and his own head bounces down the steps and into the waiting basket (a series of descending pizzicato notes). In this classic version, Leonard Bernstein conducts the Orchestre National de France.

Ligeti: Requiem
As we heard in Bartòk’s Music for Strings, Percussion and Celesta, visionary filmmaker Stanley Kubrick had a knack for finding the most haunting classical music to accompany his bold imagery. In 2001: A Space Odyssey, György Ligeti’s Requiem, with its clamouring, massed voices and dissonant microtonal clusters, captures the terrifying vastness and emptiness of the universe.