One of the hallmarks of geekdom is knowing the name of a pop artist who sang one epoch-defining song before vanishing without a trace. Or the name of an actor who appeared in only one famous motion picture (an example being Tippi Hedren, who memorably attempted to row a boat in a full-length mink in Hitchcock’s The Birds). But classical music also has its share of one-hit wonders: composers whose reputation rests on one piece of (frequently performed) music. In the case of many one-hitters, it’s hard to judge whether their other works are unjustly neglected, because they’re so seldom performed or recorded. 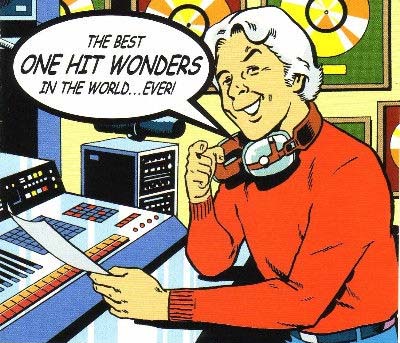 The Naxos label’s mission to record every note ever composed has certainly redefined the notion of obscurity. But even this explosion of unknown works makes little dent in the sacred canon of classical one-hit wonders. (The only contemporary addition I can predict will join this honourable register is Górecki’s Symphony of Sorrowful Songs.) Many of the composers in the list of one-hitters below have written much wonderful music besides their big smash. A few, on the other hand, may consider themselves lucky just to feature alongside their more illustrious colleagues!

The Sorcerer’s Apprentice was based on a poem by Goethe, which has been eclipsed by the fame of Dukas’s big hit. The work gained its composer instant celebrity when first performed in 1897. Dukas eventually became Professor of Composition at the Paris Conservatoire and lived to rue the popularity of a work that overshadowed all his other compositions (which he regarded as infinitely superior). He died before the piece gained even greater renown in Disney’s 1940 film Fantasia, with Mickey Mouse as the apprentice. A curio: the sorcerer is called Yen-sid (Disney spelt backwards).

Another work by Dukas you might like: Ariane et Barbe-Bleu (Ariadne and Bluebeard), opera to libretto by Maeterlinck.

Litolff was born in London to a Scottish mother and Alsatian father, who was taken to London as a prisoner while fighting for Napoleon. Henry’s life was similarly rich in incident. At the age of 17,  he eloped to Gretna Green in Scotland with a 16-year-old girl, then left for France. In 1844, he returned to England to obtain a divorce but was imprisoned for adultery and fined heavily, but was helped to escape by the gaoler’s daughter. He then returned to Europe and became friends with a music publisher (who conveniently died) and then married his widow in 1851. They in turn divorced in 1858. Litolff composed four Concertos Symphoniques which are essentially symphonies with piano obbligato. Only the elfin scherzoof the fourth, composed in 1852, is performed today. A piano virtuoso, Litolff was also the dedicatee of Franz Liszt’s First Piano Concerto.

A cliché in advertising, where it is often used with mutilated lyrics (“It’s a big ad” in a TV commercial for Carlton Draught), Carmina Burana’s primitive ostinati and pseudo-mediaevalism first exerted their mass appeal on the Nazi party when the piece premiered in 1937. The ad execs don’t suspect that this piece is the musical equivalent of Albert Speer’s monstrous architecture for Hitler’s Germania or Leni Riefenstahl’s Nuremburg rally documentaries.

Like many one-hit wonders, Boccherini partly owes his postion to the use of his music in a cinema classic, The Ladykillers (which also featured another one-hit wonder, Katie Johnson, the 76-year-old actress plucked from obscurity to play the lead). Boccherini was a prolific composer born in Lucca, Italy, who composed many quintets and works for cello. He spent much of his composing career in Spain, which was not a smart career move as it effectively sidelined him from the mainstream creative trends in France, Germany and Austria. He died in near poverty.

Born in Lucca, Catalani is an über-one-hitter, as his reputation is based on one aria from one opera: Ebben? Ne andrò lontana from the curiously named opera La Wally. Italians are blissfully unaware the  word means roughly “nincompoop” in British slang. Even more bizarrely, the great conductor Toscanini named his daughter Wally in Catalani’s memory, after the composer’s untimely death at the age of 39.  The aria became famous when used in the cult thriller Diva in 1985.

Charles Widor: Toccata from Symphony No 5

Widor was appointed, at the late age of 64, as the organist of the Church of Saint-Sulpice in Paris (making him, effectively, France’s pre-eminent organist). His organ suites are dubbed “symphonies” because the organ has so many voices it seems like you’re listening to a symphony orchestra. The toccata from the Fifth Organ Symphony became famous when it was played as a recessional at the wedding of HRH the Duke of Kent to Katherine Wolseley in York Minster in 1961. It works only in a large church, preferably a cathedral with about 2,000 guests, a horde of child attendants, boys in kilts, girls in ballet slippers, and several members of the Royal Family present.

Another work by Widor you might like: Marche Pontificale from Organ Symphony No 1 in C minor, Op 13 (1872)

Engelbert Humperdinck was a friend and colleague of Wagner. His fairy tale opera Hansel and Gretel is still in the mainstream operatic repertoire throughout the world. For many, however, the real Engelbert Humperdinck is an enduring, cheesy crooner whose real name was Arnold Dorsey and whose most famous number was Please Release Me. His manager (whom he shared with Tom Jones) suggested the moniker.

Otto Nicolai: Overture from The Merry Wives of Windsor

German composer Otto Nicolai was prominent in musical life in both Berlin and Vienna. His only performed work, the comic opera The Merry Wives of Windsor, is on the periphery of the mainstream. However, Nicolai has one towering achievement to his name: he founded the Vienna Philharmonic Orchestra in 1842!

Allegri became famous in Rome and abroad for his double-choir Miserere of around 1630. The work forgoes intricate polyphony for more declamatory impact in stile antico, or the “ancient style”. Pope Urban VIII deemed it so solemnly beautiful that it was banned from being performed anywhere outside of the Sistine Chapel, and only then during Holy Week. No copies of the music were allowed to be published or circulated during this time. Its forbidden nature gave the piece an aura of profound mystery and exclusivity, unbroken until the teenage Mozart heard it in Rome and transcribed it from memory, risking excommunication.

Curiously, Allegri’s one-hit wonder status may be based on a not he didn’t even write. The celebrated high C for which the Miserere has become famous may not have been in Allegri’s original score, but rather the soaring improvisation of a solo singer that’s stuck with the piece ever since.

Is there any self-respecting string quartet that doesn’t have Pachelbel’s famous canon ready to go in case of a wedding gig or a lucrative busking session? Much of the German Baroque composer’s other work is lost, but his Canon (without the original accompanying gigue, which has been largely ignored) became a hit when it was first published in 1919. It is thought that it was composed in 1694 for the wedding of Johann Christian Bach, the eldest brother of Johann Sebastian and a former pupil of Pachelbel’s. It would have given the composer great joy to know that his simple, repetitive piece is now heard at almost every wedding ceremony the world over.