Actress Cate Blanchett appeared as ambassador for the Australian arts sector, as she paid tribute to Gough Whitlam in front of a capacity crowd of 2000 at Sydney Town Hall yesterday. Over a thousand more spectators were also assembled outside the venue in the city’s CBD to watch the memorial service on big screens.

Blanchett was applauded by the assembled crowds both inside and outside the hall during her moving address at the state memorial for the former Prime Minister. She expressed her gratitude to the recently deceased Labor leader for the cultural and educational initiatives put in place during his tenure that Blanchett credited with allowing her to forge her career as one of Australia’s most revered and accomplished actresses. 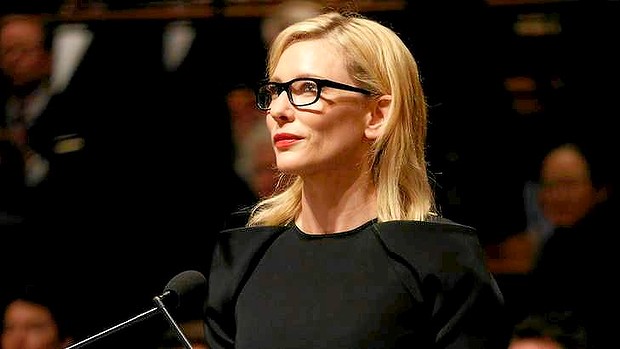 “When I heard Gough Whitlam had died, I was filled with an inordinate sadness. A great sorrow” Blanchett began her speech. “The loss I felt came down to something very deep and very simple,” she continued, “I am the beneficiary of free tertiary education,” – a statement that provoked a spontaneous outburst of applause and cheering.