Director Chris Bendall and actor Wahibe Moussa are taking part in a special staged reading of Tony Kushner’s Homebody/Kabul, a fundraiser for on-the-ground charities in Afghanistan.

The pair first performed the play in 2007, a small show that became a big hit, critically-acclaimed and leading to a Victorian Green Room Award for Moussa. This reading reunites a number of the creatives from that production, including Tyler Coppin, Majid Shokor and Osamah Sami, as well as some new faces including Simon Burke, Geraldine Hakewill, Reza Momenzada, Mansoor Noor & Caroline Brazier as the Homebody.

Bendall and Moussa talk about how this reading came together, and Kushner’s tragically still-relevant play. 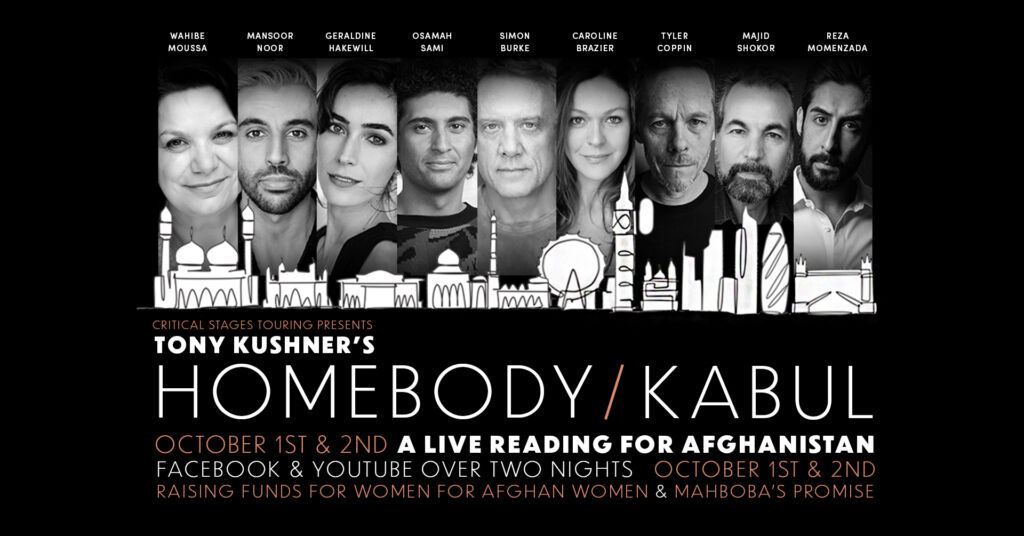 The poster for the Homebody/Kabul fundraiser.

“Watching the shocking events unfold in Afghanistan earlier this month was absolutely heartbreaking. Twenty years of struggle and progress swept away by the return to power of the Taliban just seems incomprehensible to me. So I began thinking about Homebody / Kabul, this marvellous and rich play that I had directed in Melbourne in 2007, with a small company I led at the time called theatre@risk. It was a hugely rewarding experience then, a rich and complex exploration of the history of Aghanistan and modern-day life there under the Taliban. And I wondered what it would be like to return to this play. I knew the experience had been a significant one for many of the cast, so had a feeling they would be as interested in returning to this story as I was, and thankfully they were.

“With the majority of our creatives and cast in lockdown in Melbourne, NSW and Victoria, a live-streamed reading was a way to bring them all together to support Afghan aid, which may have been impossible under normal circumstances.

“I’m very much looking forward to diving back into the play with this cast and sharing this story again. This is a play about characters yearning to be understood and so I hope through sharing this experience with audiences around Australia, we will be able to understand the situation in Afghanistan a little better, learn more about the history, culture, struggles, and – as the characters do in the play –how to connect.” 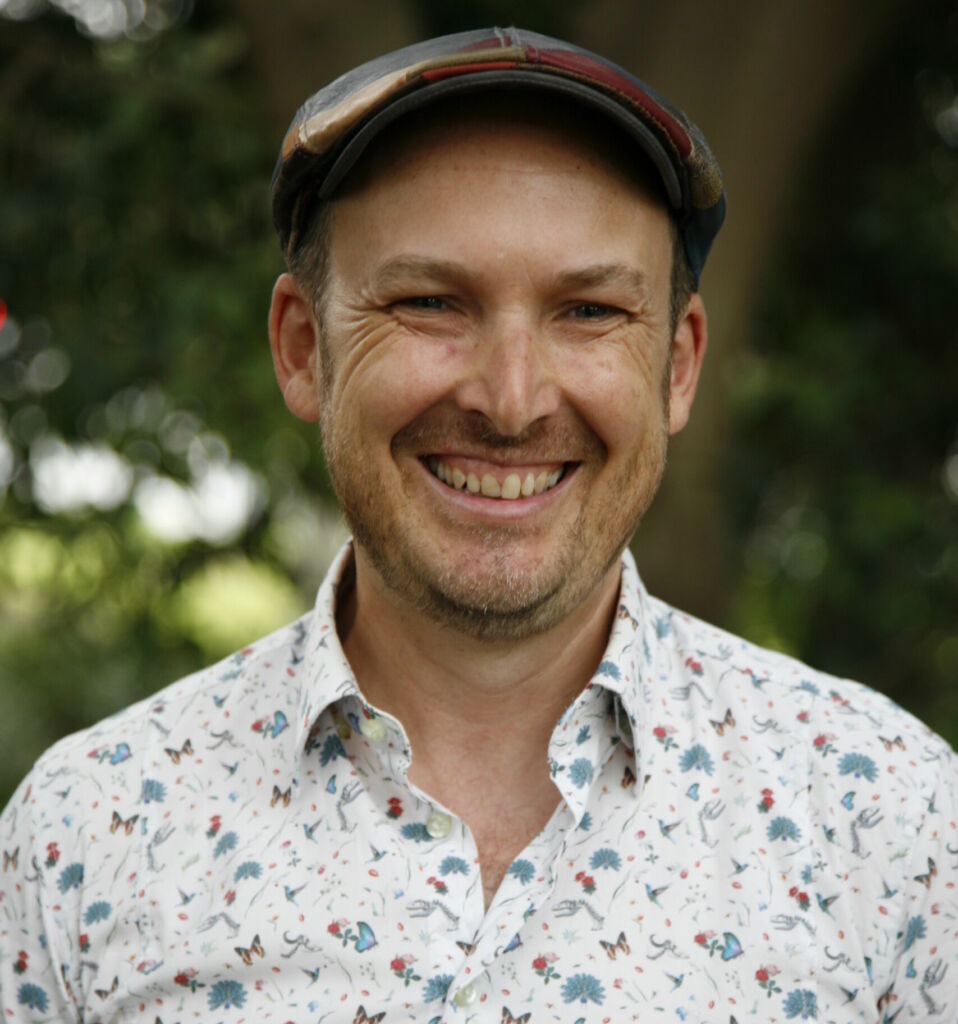 “I find her an inspiration. I find her ill-fitted-ness in the situation that she’s in – I find that a very exciting story to follow, and to explore… In her own right, she’s a very inspirational character, someone who reminded me what it actually meant to be a woman what it actually is to be a woman. She reminded me how hard women have had to fight – throughout history, across cultures – to make their place in their society,  to claim their place, and to be able to hold it.

“During rehearsals for the Melbourne Premiere season, Mahala reminded me of the hard work that historically, has been invested, and the work that we still have ahead of us, especially, given what’s happened in Afghanistan. I mean, my first thought, when I heard about America leaving and the Taliban taking back control, my first thought was, “Oh my god”. I literally thought “Mahala, what’s she going to do?” because Mahala the character is symbolic, to me, of all the women who are working and have been working for the last 20 years – longer – to ensure Afghani women’s safety and ensure their place within their society and in Government. What is going to happen to them now? How are they going to be punished for standing up for themselves? For holding up the right to be counted and to have their rights counted?

“I’ve jumped into the spoken word side of performance, and I’ve really enjoyed the opportunity to be able to connect with other poets and other writers and still have a platform, for me to read my written work, and to gain acceptance in that level, but how that translate translates into acting, I don’t know yet. 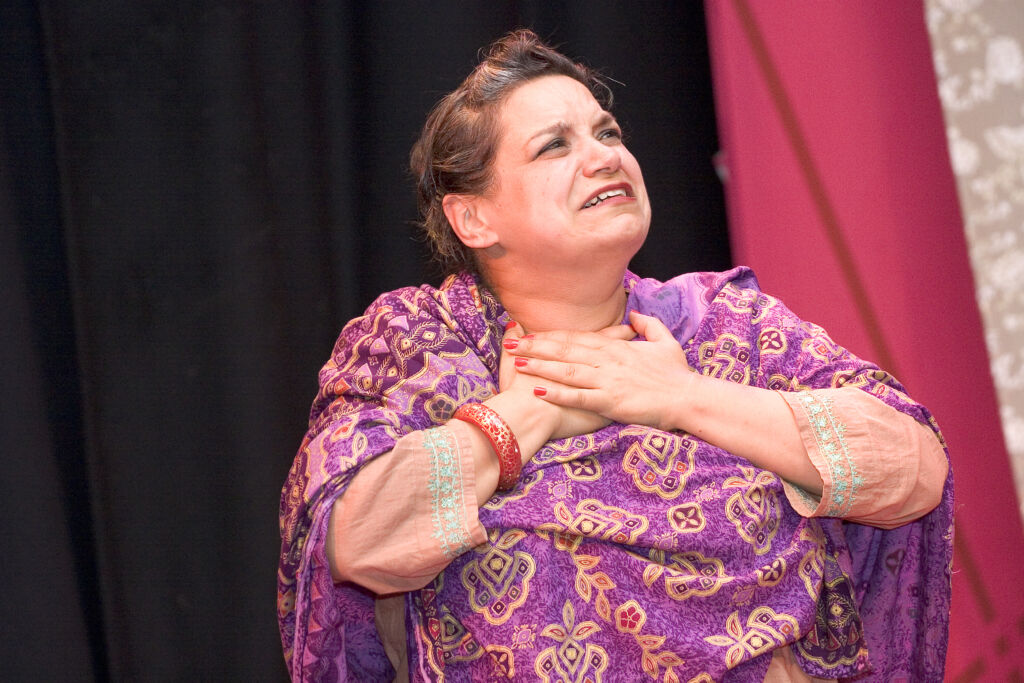 Wahibe Moussa in the 2007 production of Homebody/Kabul. © Josephine Harkin.

“I’m really, really hopeful that we will be able to get an audience right across the country, if not across the globe, who will want to support the Afghan peoples in one way or another, through donations or through getting inspired and getting knowledge. Being able to bring Homebody/Kabul to new audiences, online, will give us a chance to really get people talking.

“I worry about the possibility that once the shock of what’s happened wears off people will forget the idea of Afghanistan and what’s going on there will just melt back into the background. My connection to Afghanistan goes back to 2000/2001 when I got involved with Medicens sans Frontière –   Doctors Without Borders. I worked with the Australian Office on a national tour as a storyteller. My job was to retell the stories of the refugees who had access to MSF in various refugee camps around the world. I think they had 10 objects from refugees from all around the world, and one of those was a pair of slippers from an Afghan man who had had to leave his hometown, due to the drought that had lasted 25 years. He was desperate, and had to take his family, cross borders into Pakistan, go through all sorts of danger, to find safety for them. He donated the slippers he had walked in to this travelling exhibition as a symbol of his journey, and his gratitude for the help he’d received. This was in the 90s, as well as the drought, there was all the political turmoil that had been happening in the background. This is after the Russian invasion. And after the Americans had gone in…  to push back the Russians and all the political hand balling that happened.  So, the results of all of that was that, the farmers, the people on the land ended up with absolutely nothing, having no, money, no support, nothing. So I knew about that. But I knew that it was also not very well talked about not very well known.

“Afghanistan, you know, has been dealing with one disaster after another for the last 40 years. Back to the 80s. But apart from every now and again we get a spurt of, you know headlines about one country or another has invading Afghanistan. Apart from that we don’t really know what’s actually going on. And I fear that that’s going to continue.

I really hope that by restaging or re reading this play, and making it accessible to anyone who has internet basically – that we manage to keep Afghanistan at the forefront of people’s minds, and that we can find a way together to keep the conversation going because it’s through conversation that we find ways of resolving problems. That’s my hope. And the fundraising is important but to me the fundraising is the result of all of that conversation and creating connection.”

Alinta Chidzey and newcomer Des Flanagan have landed the coveted roles of Satine and Christian in the Australian production opening in Melbourne in August.

A stunning line-up of Australian performers will raise money for the victims of the tragic mass-shooting. Continue reading Get unlimited digital access from $3 per month Subscribe Already a subscriber? Log in

How Simon Burke came to own his musicality

‘Don’t sing like a bloody girl’ was the best advice this actor ever had. Now, from Sondheim to Hairspray, he’s an old musical hand. Continue reading Get unlimited digital access from $3 per month Subscribe Already a subscriber? Log in

Limelight congratulates this year’s artistic luminaries recognised for services to the arts.