Unfurl your Tricolore and man the barricades – a concert spectacular featuring numbers from musicals including Les Misérables and Miss Saigon is coming to the Sydney Opera House and Arts Centre Melbourne in September.

Do You Hear The People Sing? is a celebration of the work of Alain Boublil and Claude-Michel Schönberg, the creative duo behind the phenomenally popular Les Mis and Miss Saigon. Developed over the course of a decade by Boubil and Schönberg, in collaboration with producer Enda Markey, it is the only concert authorised by the pair, who consider it a definitive showcase of their work. Headlined by musical theatre royalty Michael Ball, the concert will feature eight musical theatre stars from around the world, including Australians Bobby Fox, David Harris and Suzie Mathers, a 24-piece orchestra and a 12-person choir, performing hit songs from the duo’s works including their other musicals Martin Guerre, The Pirate Queen and La Révolution Française.

These performances will be the Australian premiere of the concert spectacular, which has previously been staged in China, Taiwan, the Philippines and across the US including at Carnegie Hall. Boublil and Schönberg themselves will travel to Australia for the first time in 25 years, and will take part in two In Conversation events, hosted by Julia Zemiro in Sydney and Mark Humphries in Melbourne.

These concerts will also mark a major milestone for the Sydney Opera House Concert Hall, which is due to reopen in June after two years of renovations and upgrades.

“It is an enormous pleasure for us, in collaboration with Enda Markey, to bring the concert we conceived to Australia following the warmth of its reception in the USA and in Asia. It is especially thrilling for us to see the concert play in two of Australia’s most iconic venues – Hamer Hall and Sydney Opera House’s newly refurbished Concert Hall,” said Boublil and Schönberg.

“This new version, especially created for Australian audiences, traces the history of our 50-year collaboration, showcasing a wide selection of well-known songs from our shows as well as a journey of discovery through how some of the songs were written, rewritten or reinvented.” 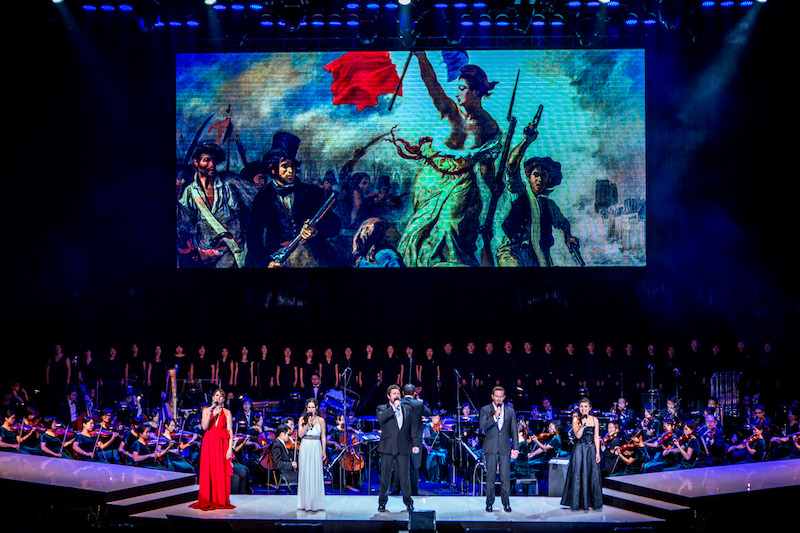 One Day More being performed in Do You Hear the People Sing? in Asia. Photo supplied

Sydney Opera House Head of Contemporary Performance, Ebony Bott said, “This is a once in a lifetime experience for lovers of musical theatre. Do You Hear The People Sing? will be one of the first Sydney Opera House Presents seasons in the Concert Hall after more than two years of extensive upgrades. This production will showcase our world-class Concert Hall at its best; orchestra, powerful voices, and digital projections explaining the stories behind some of the last century’s biggest musical hits. As well as Boublil and Schönberg themselves – Live in Conversation!”

Do You Hear The People Sing? will premiere at Melbourne’s Hamer Hall on 27 & 28 September, and will play at the Sydney Opera House Concert Hall from 30 September – 2 October, 2022. The Boublil & Schönberg In Conversation events will take place on Sunday 25 September (Melbourne) and Saturday 1 October (Sydney). For tickets and more information, visit thepeoplesing.com

The 2020 Festival will celebrate its 20-year history at the opening gala and host a four-day French Soirée, among other teasers announced today.

The New York-based Australian performer will reprise the role of Bernadette in the 10th anniversary production.

Staff at Monkton Combe School in the UK, led by Principal Chris Wheeler, surprise school-leavers with One Day More.

The Filipina singer, whose credits include Miss Saigon and two Disney princesses, performs in concert in Australia. Continue reading Get unlimited digital access from $3 per month Subscribe Already a subscriber? Log in

Australia’s Jean Valjean takes time out from manning the barricades eight times a week. Continue reading Get unlimited digital access from $3 per month Subscribe Already a subscriber? Log in