As the summer holidays loom, visions of long, languid days relaxing on the beach and indulging in hours of uninterrupted reading start to become a tantalising prospect. I for one can’t wait to get lost in a good book. In this month’s cover story, Books That Hit the High Notes, Shamistha de Soysa features 12 publications that centre on music or musicians. They aren’t necessarily the latest releases – though some have only just hit the bookshops – but they are among her favourites. They include novels, biographies and a little humour, among them Bradford Morrow’s The Prague Sonata, Rachel Joyce’s The Music Shop and Lyndsy Spence’s new biography of Maria Callas to name but a few. We’ve also added a few extras on the side as there were other books we couldn’t bear to leave out. Spoil yourself, or add them to your Christmas gift list and treat a friend. 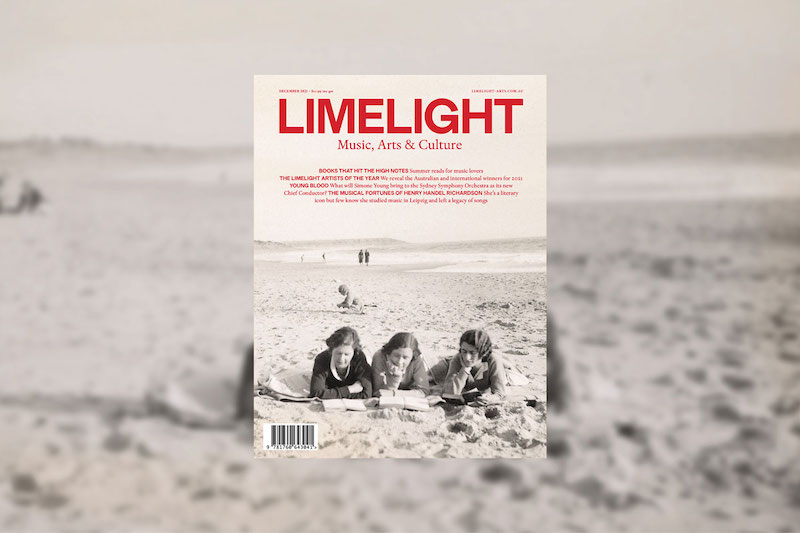 As 2021 comes to an end, it’s time to announce the Limelight Artists of the Year. After a hiatus in 2020 due to COVID, we felt that enough wonderful work had been done in 2021 to revive the awards and so we asked our reviewers and readers to vote for the Australian and international artists they’d like to see honoured. We are thrilled to reveal the winners and runners-up in our Critic’s and People’s Choice Awards for 2021.

We also announce the Limelight Recording of the Year for 2021 and the winners in the five categories (Orchestral, Chamber, Instrumental, Vocal and Opera).

In 2022, Simone Young steps onto the podium as the new Chief Conductor of the Sydney Symphony Orchestra. In our feature Young Blood, Harriet Cunningham talks with the Sydney-born Maestra and the SSO’s Chief Executive Officer Emma Dunch about what it means for the Orchestra to have lured Young back to Sydney. They also discuss the return of the SSO to the Sydney Opera House Concert Hall in July, the challenges ahead and their plans to find new ways for the Orchestra to engage with the community.

Henry Handel Richardson is a literary icon. But did you know that she studied piano and composition in Leipzig and wrote a treasure trove of songs between the two world wars? In our fourth feature, The Musical Fortunes of Henry Handel Richardson, pianist Tonya Lemoh and soprano and lecturer Narelle Yeo trace Richardson’s passion for music and explain how they decided to make the first commercial recording of her songs, now available on Toccata Classics.

Also in this issue, I talk with Olivia Ansell, the new Director of Sydney Festival, about programming the 2022 festival, and the importance of culture and the healing role it plays in society.

As usual there is plenty more. In our Cutting Edge column, Kieran Welch explains how and why he founded Dots+Loops, a “post-genre music and arts series” based in Brisbane. In Playing Up, Ben Marks discusses the trombone, including the rather amazing double bell trombone he created to play Liza Lim’s extraordinary composition The Green Lion Eats the Sun, which you can view on ELISION’s YouTube Performance Series.

Guy Noble ponders narcissism and the difficult experience he had with a self-described “visionary” in his Soapbox, while Kip Williams, the Artistic Director of Sydney Theatre Company, answers 5 Questions about his new production of Julius Caesar, performed in the round by a cast of three. In Sacred Cow, Phillip Scott discusses “Musical Detritus”, as he puts it  – the tangential things that colour our attitudes to music – and says that Marie Kondo would know what to do with it. Finally, ABC Chair Ita Buttrose is the subject of our My Music column and shares what it was like to grow up in her very musical family, which generated a passion for music that has never waned. Enjoy!

Subscribe by Monday 15 November, 9am AEDT to receive a copy of the December 2021 issue of Limelight.

More artists and performers are withdrawing from Sydney Festival as part of a boycott protesting the festival receiving funding from the Israeli embassy.