The November 2021 issue of Limelight is now available online for our subscribers.

The Adelaide Festival will announce its full 2022 program on 26 October. So far we know that the centrepiece will be Barrie Kosky’s production of Rimsky-Korsakov’s final opera The Golden Cockerel.

The dazzling, dreamlike production premiered at the Opéra National de Lyon in May this year then had a season at the Festival d’Aix-en-Provence where it was rapturously received. In March, the opera will be fully staged for the first time in Australia when Kosky’s production is presented in Adelaide. In our cover feature, The Cockerel Finally Crows, Jansson J. Antmann talks to the legendary director about his decision to steer clear of Russian folklore, why his acclaimed production is seen through the eyes of a mad king, and why he has envisaged the titular bird as a sexually ambiguous angel of death. 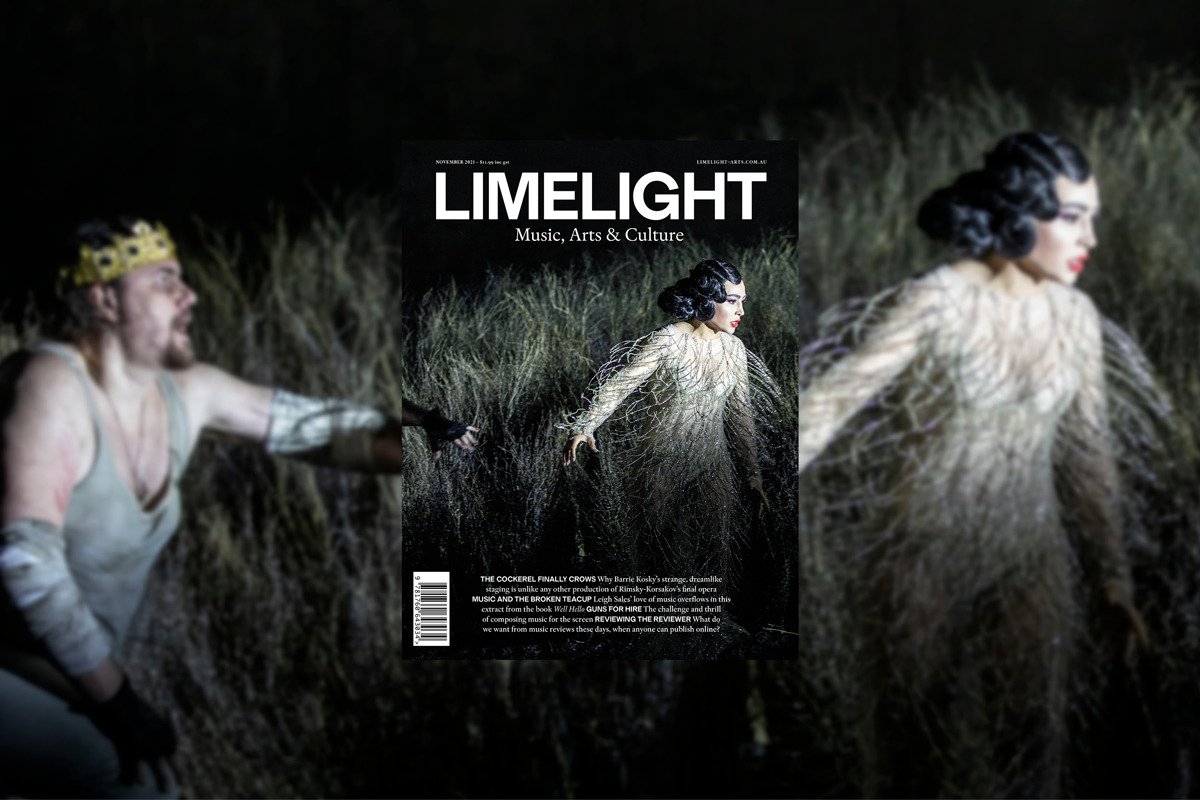 This month’s cover image features a scene from Barrie Kosky’s production of The Golden Cockerel at the 2021 Festival d’Aix-en-Provence. Photo © Jean-Louis Fernandez

In November 2014, high-profile journalists and close friends Leigh Sales and Annabel Crabb launched a podcast called Chat 10 Looks 3, which has gone on to become a smash hit. Now they have written their first book together, Well Hello, Meanderings from the world of Chat 10 Looks 3, published by Penguin Random House. We run an extract, which we have called Music and the Broken Teacup, in which Leigh Sales looks back with gratitude on her music lessons as a child, explains how the teacup analogy in the memoir of Chicago Bulls coach Phil Jackson has become something she references every day, and how playing and listening to music is like “taking a holiday” from herself.

From spaghetti westerns to new Australian drama series, nearly every moment we experience on film and television is accompanied by music. In our third feature Guns for Hire, our former Deputy Editor Angus McPherson talks to five composers who write for the screen about the pleasures and perils of working in an art form that aims to hit the audience in the head, heart and gut.

In a world where anyone can be an online critic, how much has changed in classical music reviewing and what are the skills required to do the job well? In our final feature Reviewing the Reviewer, Shamistha de Soysa talks to musicians, editors, artistic directors and an audience member about what they hope and expect to read in reviews.

Also in this issue, Rhys Ryan interviews Alice Topp, a former dancer with The Australian Ballet and now a resident choreographer with the company, about the new collective of independent artists she has formed called Project Animo. Deborah Jones celebrates the 30th anniversary of Restless Dance Theatre, and Winnie Huang writes this month’s Cutting Edge column about the new music festival introduced to this year’s Lucerne Festival – the Lucerne Festival Forward. Huang is one of the Contemporary Leaders chosen to collaborate, program and construct the new three-day event. Clive Paget gives us his monthly round-up of what’s new on disc in his column On the Record, Marilyn Phillips reviews the new opera Koolbardi wer Wardong and Lee Christofis reviews the book Built for Ballet by Leanne Benjamin and Sarah Crompton.

As ever, there is plenty more besides. In this month’s Soapbox, Guy Noble reveals that he has taken pleasure in cleaning during the lockdowns and wishes he could take his brain out and give it a good scrub too. In our Playing Up column, Timo Veikko-Valve, the Principal Cello at the Australian Chamber Orchestra, tells us why he became a cellist and describes the two “long-term relationships” he has had at the ACO with a 1729 Guarneri and a Brothers Amati cello from 1616. Vincent Ciccarello, Managing Director of Adelaide Symphony Orchestra, answers 5 Questions about the ASO’s Festival of Orchestra. In My Music Rachel Kent, the new CEO of Bundanon Trust, reveals how art and music have always been part of her DNA, while in this month’s Sacred Cow Chad Vindin says that reports of the death of classical music are greatly exaggerated – in fact, after all the streaming that happened during lockdown, suddenly we can’t get enough of live classical music.

Subscribe by Monday 18 October, 9am AEDT to receive a hard copy of the November 2021 issue of Limelight. With a print subscription you will never miss an issue, save up to 36% on the cover price, and get free access to a growing digital archive of lively and intelligent Australian arts journalism.