Australian countertenor Maximilian (Max) Riebl, whose many credits including performing with Pinchgut Opera and the Australian Brandenburg Orchestra, has died of cancer, aged just 30.

The ethereally voiced singer was born in Melbourne on 26 June, 1991 into a musical family. His Austrian father Luis is a psychoanalyst but Luis’s brother Thomas is a viola player and music professor in Vienna. Max’s older brother Felix Riebl started jazz/funk band The Cat Empire in 1999, while he was a teenager, and his sister Rose Riebl is a pianist, singer and composer.

Since news of his death broke, there has been an outpouring of emotion on social media with Erin Helyard, the Artistic Director of Pinchgut Opera, describing  him as “a singer of translucent, burnished tone and vivid, athletic coloratura” and “a gentle man who was thoughtful and calm”, while Mitchell Butel, who directed him in Pinchgut’s production of The Loves of Apollo & Dafne, said he was “as charming and as gorgeous as any fairytale prince” and “a prince of a human being too”.

Riebl played trumpet as a child, making his performance debut with The Cat Empire at age ten, on stage at the Prince Wales Hotel in St Kilda, Melbourne. He showed an ability as a vocalist and actor at an early age, and sang with the Melbourne Grammar School Chapel Choir under Philip Carmody. He also played The Youth in Mendelssohn’s oratorio Elijah with the Royal Melbourne Philharmonic Choir and Orchestra.

In 2004, he moved to Vienna where he attended the Musikgymnasium (Music High School). He sang as soloist in the Musikverein and Schubertsaal, and performed the role of Cupido in John Blow’s opera Venus and Adonis at the Kammeroper. He also performed with the Clemencic Consort and the Hofburg Chapel Choir, and was engaged for many solo performances in and around Vienna.

While in Vienna, he studied voice with Silvia Purcar. His other long-time singing teacher was Dermot Tutty in Melbourne. He also studied Baroque performance in Switzerland, at the Schola Cantorum Basiliensis. During this time, he worked with Gerd Türk, Jörg-Andreas Bötticher and Andrea Marcon.

In performing the great works of Monteverdi, Bach and Handel, Riebl received top prizes in competitions such as the Royal Melbourne Philharmonic Arias and Chicago’s Classical Singer Competition.

In 2013, he performed in Simon Stone’s production of Hamlet at Belvoir. In his own concerts and cabaret shows such as The Great Pretender and The Cold Genius, he combined rock, pop and classical music, fusing Bach, Handel and Schubert with Garland, Radiohead and Morrisey to create something distinctly his own in performances for the Adelaide Festival, the Melbourne Cabaret Festival and the Melbourne Fringe Festival.

He recorded with the Cat Empire (EMI) and the Australian Brandenburg Orchestra (ABC) and featured in the soundtrack for the Australian film Remembering the Man. 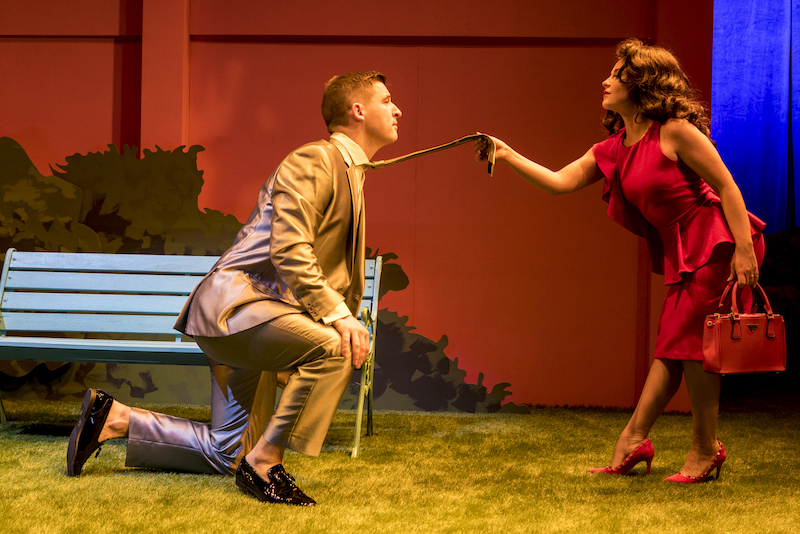 Max Riebl as Cephalo and Alexandra Oomens as Aurora in Pinchgut Opera’s The Loves of Apollo & Dafne. Photograph © Brett Boardman

Erin Helyard released a statement in which he described Riebl as “a singer of translucent, burnished tone and vivid, athletic coloratura”.

“Max was a gentle man who was thoughtful and calm and whoever shared the stage with him felt the placid glow of his presence. At the forefront of his musical personality was an unwavering dedication to beauty, clarity, and warmth of tone. He had an instinct for ornamentation and improvisation, and he excelled in da capo embellishments. His great vocal attributes were effortless virtuosity and a limpid, pure sound. He was at the height of his powers,” said Helyard.

“Max was welcomed into the Pinchgut family with his company debut in the role of Gilade in Vivaldi’s Farnace (2019). In 2021 he played Apollo in a critically acclaimed performance of Cavalli’s The Loves of Apollo & Dafne. Max delighted audiences not only as Apollo, the god of music, but also in his virtuosic doubling roles as Titone, Cirilla, and Cefalo. In the same year, Max sang as a soloist in our celebrated Monteverdi Vespers. These recordings are among the last products of Max’s artistry. All of us at Pinchgut Opera were very close to Max and his family in the last year of his illness, and our thoughts are with [his wife] Bethany, [and children] Ivy, and Billy.”

Riebl sang with The Song Company as a Guest Artist and then briefly as a Principal Artist. Antony Pitts, Artistic Director of The Song Company, said on Facebook, “Max Riebl sang with us for just a short time, but in that time demonstrated both excellence in his unique artistry and also an equally beautiful sense of commitment, sticking with us through difficult times and always keeping his composure in the face of production craziness – a true pro.”

“I remember the sweet smile he’d give me after singing his cover version of Kate Bush’s Running Up That Hill, at least that is, when we’d done a good job that night.” 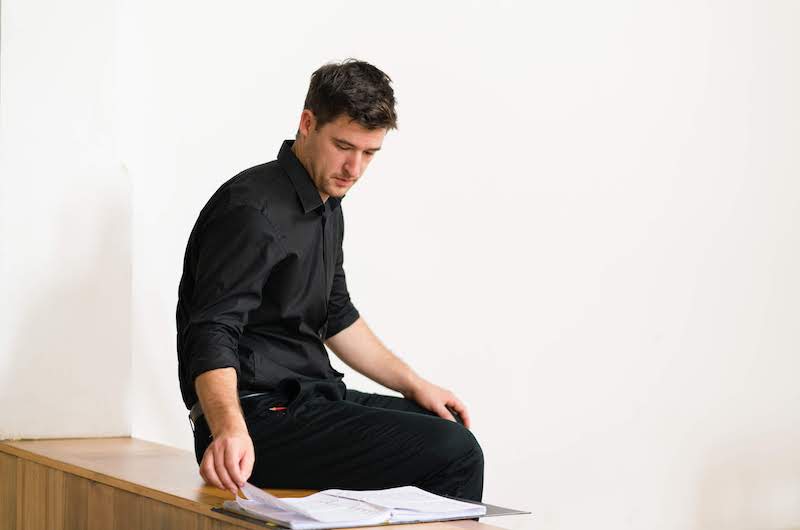 “This photograph (by Connor Malanos) is of Max during our mammoth 150 Psalms project for the Adelaide Festival, checking through the seemingly thousands of pages of music we had to prepare, and no doubt working out where he was going to do something special.”

“Our hearts go out to his family.  May the precious love they shared, and about which Max spoke openly and beautifully, sustain them through the days ahead.”

Mitchell Butel described Riebel in a Facebook post as being “as charming and as gorgeous as any fairytale prince”.

“And he was a prince of a human being too. Wise and calm and smart and assured beyond his 30 years. A deep thinker and questioner. A sly wit. A truth teller. A playful collaborator. One of the world’s finest countertenors and performers. And one of its finest and most loving husbands and fathers too,” wrote Butel.

“Working with him [on The Loves of Apollo & Dafne] and getting to know him more was one of the true joys and educations of my life. He triumphed of course and was acclaimed by all who saw and heard him. “

“Over the course of his illness, our friendship deepened. Despite his pain, his toughness, his bravery, his quest for truth, his desire for more art, his honesty about the world and life continually floored me.”

Butel quoted the last piece that Riebl himself posted on social media the day before his death:

“Hundreds of solo shows around the world. Orchestras, Operas, Renaissance ensembles, Evensong, cabaret and theatre. Spectacular venues. Thousands of hours of practice, radio interviews, photo shoots, extraordinary musicians. Hundreds of hours of travel, uncountable pieces learned and sung. Dozens of competitions. Thunderous applause. Silence and contemplation. Recording sessions. Sleepless nights. Hotel rooms. Loneliness. Laughter. After parties. Tension. Freedom. Bach, Monteverdi, Vivaldi and all things contemporary. Airports. Sacrifice. Sets, costumes, suits worn to a thread and stained with sweat. Difficult to quantify. Difficult to comprehend. An intense, unbearable and mesmeric series of experiences and memories. Some of the greatest and most honorable people I have known. You know who you are and I’ll never forget you.”

“To those unaware, I have been diagnosed with an incurable cancer. The fight has been brutal and relentless and current symptoms make performing and touring impossible at this time. Nothing is set in stone, miracles happen, but for now, thank you for your support, your kindness and appreciation. May the music go on and may the musicians of Australia continue in their brave pursuits, against the odds. With Love. Max”