The Melbourne-based violist competed against harpist Emily Granger and fellow violist Henry Justo, to emerge as the winner of the Music Trust’s coveted $21,000 Fellowship. The finals took place over the weekend in front of a live audience and an esteemed panel of judges in the intimate Utzon Room of the Sydney Opera House. 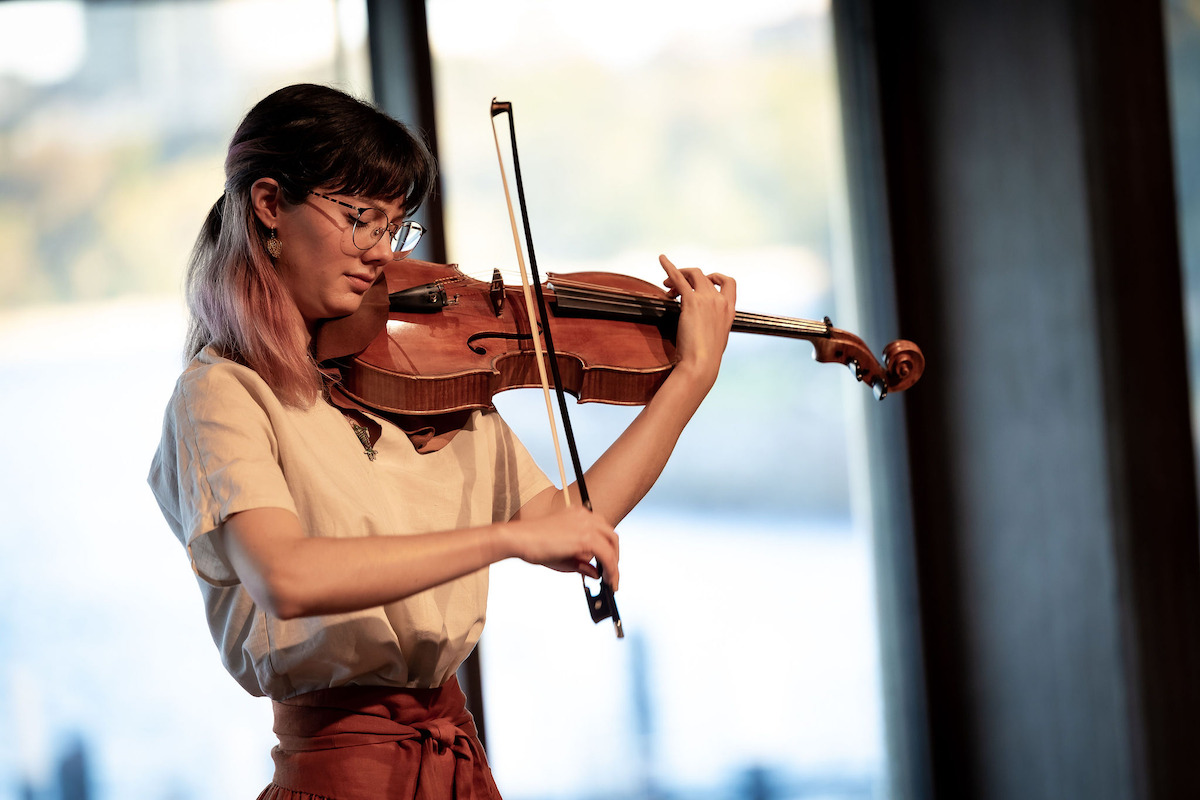 Yap will use the prize money to bring to life her project Multitudes, a series of collaborative compositions and improvisations developed with prominent Australian musicians Emily Sheppard, Donald Nicolson, Bowerbird Collective and Mindy Meng Wang.

“As a violist, looking out from the middle of the sonic sandwich, my musical identity comes from my connections with others,” said Yap. “That’s why I’ve chosen the medium of collaborative composition to create the pieces in this project, and I’m so excited to work with each of my collaborators!”

Each work in Multitudes is inspired by a bird poem by Judith Wright, selected for the way it suits the character of its respective collaborator. “My mother introduced me to these beautiful poems, along with a love of birds themselves”, said Yap. “Multitudes represents an exciting, scary step for me in my career – it gives me the opportunity to step into the role of a creator of music, not just a performer and curator.”

Each work will be workshopped, filmed by videographer Darren James and presented as part of a residency at Melbourne venue Tempo Rubato.

Born in Brisbane, Yap graduated from the University of Queensland with a University Medal, before commencing training at the Australian National Academy of Music (ANAM). She is a fixture of Melbourne’s art music scene on both modern and Baroque viola, regularly performing in chamber ensembles such as the newly formed Croissants and Whiskey, The Muses’ Delight and Chrysalis Harp Trio, alongside orchestral engagements with Australian World Orchestra, Australian Brandenburg Orchestra, Australian Chamber Orchestra and Melbourne Symphony Orchestra. Her festival Music, She Wrote for 3MBS Fine Music enjoyed its second year in 2022.

The Freedman Fellowship Awards, awarded annually to one classical and one jazz musician, were conceived by Laurence Freedman and Richard Letts in 2001. Since then, they have supported some of Australia’s most celebrated artists, including Genevieve Lacey, William Barton, Joseph Tawadros, Claire Edwardes and Eugene Ughetti. Victorian violinist Kyla Matsuura-Miller received the coveted prize last year.

This year’s distinguished panel of judges comprised Kim Cunio, Kirsty McCahon and Stephen Mould, who said in a combined statement: “The finalists selected are a wonderful reflection of the depth and diversity of music making in Australia today. Never before has Australian music had such an important role in helping to define who and what Australia is. With that in mind, these outstanding and highly creative young artists signal that the future of Australian classical music is in very good hands.”

In the finals, Yap played Aftermath by Emily Sheppard, one of her upcoming Multitudes collaborators, and delivered a mesmerising performance as both violist and vocalist to secure her prize.

Upon her win, Yap thanked the people who have encouraged and supported her. “I’m extremely grateful to all the people who’ve supported me over my musical life to get to this point, particularly my mentors Julia Fredersdorff and Genevieve Lacey, and to the Freedman Fellowship for giving me the opportunity to dream bigger than I could have ever dared.”

The finalists for this year's coveted prize are harpist Emily Granger and violists Henry Justo and Katie Yap.