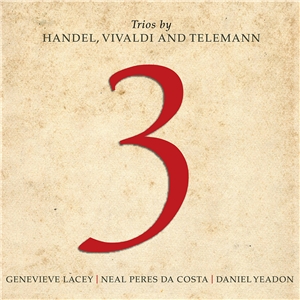 Thus the eight beautiful maps that adorn the booklet accompanying this toothsome program of chamber music from three of Australia’s finest Baroque musicians. There are arrangements of well-known orchestral works, such as Vivaldi’s Concerto for Two Violins in D Minor RV522; there’s even one for cello, recorder and organ of an aria from Handel’s opera Tamerlano. There are famous chamber works, such as Handel’s Sonata in A Minor for recorder and continuo, HWV362. And, to allow each musician to really shine, there are solo works for each instrument: Handel’s Harmonious Blacksmithvariations for harpsichord, Telemann’s Fantasia for solo recorder and Andante from a sonata for viola da gamba.