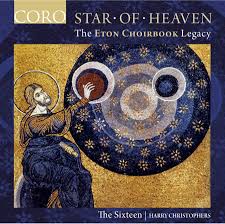 The Sixteen have been champions of the Eton Choirbook for years. Here is a thoughtful juxtaposition of some of that wonderful polyphony with contemporary works commissioned through the Genesis Foundation. Beginning with the beguiling simplicity of the plainsong Nesciens Mater, we are treated to the long arcs of Walter Lambe’s setting of the same text, contrasting with James Phibbs’s poignant homophonic treatment.

One of the highlights is Phillip Cooke’s rhapsodic riff on William Cornysh’s sombre Ave Maria, Mater Dei. Cooke uses two off-stage sopranos interacting with the main choir to create an ethereal sound world that conjures up the lost world of Tudor music. In the middle of this garden of musical delights stands James MacMillan’s O Virgo Prudentissima, in which the composer uses a wide variety of textures and techniques including humming to produce a colourful music tapestry with a considerable number of technical challenges. In the reverberant space of St Augustine’s, Kilburn, the singers acquit themselves well, delivering an atmospheric account.

Marco Galvani’s response to Lambe’s Stella Caeli has a certain harmonic austerity that works well with the text, a prayer from deliverance from plague. Robert Wylkynson’s glorious Salve Regina brings us to Stephen Hough’s Hallowed, which uses texts from different faiths to provide an interesting counterpoint to this otherwise Catholic and Marian program.

The Sixteen shine in their fifth album exploring Polish music.

The Stabat Mater Dolorosa first appeared in the second half of the 13th century as a lengthy poem set to music, generally attributed to Jacopone da Todi (d. 1306), an Umbrian Franciscan friar. It is one of the countless expressions of the affective piety that characterised Western late-medieval Christianity, encouraging intense and emotional identification (as fellow suffers) with Christ, his mother and other characters in the Christian story, often in minute detail. The Stabat Mater focuses closely on Mary’s abject sorrow as she stands at the foot of the cross, on which hangs the crucified body of her son. It has received many musical re-settings over the centuries, most famously by Palestrina in around 1590, and Pergolesi (1736), but also by Dvorˇák and Rossini, and in the 20th century, by Szymanowski (1926), Poulenc (1950) and Pärt (1985). James MacMillan (b. 1959) has a long history of writing in religious musical forms, and his 21st-century Stabat Mater is scored for choir and string orchestra. It was written with the particular strengths of Harry Christopher and The Sixteen in mind. It’s an intense, personal and captivating work, beautifully recorded in the Church of St Augustine’s in Kilburn, London. The interplay between voice…

Harry Christophers on the choral poetry of Francis Poulenc

The English conductor gives his take on whether the French composer was rascal, monk, or both.

How do you take your Poulenc? I only ask because, conveniently, The Sixteen have recorded a lot of the repertoire on their latest disc before, and their thinking has changed dramatically in the 30-year gap. The contrast between the 1990 Figure Humaine (Virgin Classics, now Erato 5624312) and the newly released Francis Poulenc: Choral Music (CORO) is striking – neither an improvement nor the reverse, simply two very different approaches to the composer’s sacred music. Poulenc’s journey to faith was a swift and dramatic one. The turning point is usually placed in 1936, when two separate events together propelled the composer into a new state of mind. The sudden and violent death of his friend, composer Pierre-Octave Ferroud, in a car accident prompted a visit to the small chapel at Rocamadour, where a mystical experience restored the Catholicism of his childhood. He immediately began work on a sacred piece – the Litanies à la Vierge Noir – taking his first steps in a genre that would become a constant throughout his life. The sound-world of Figure Humaine is one of gauzy, glossy beauty – a Mannerist vision of a heaven that’s all soft-focus loveliness and elegance. These are performances that…