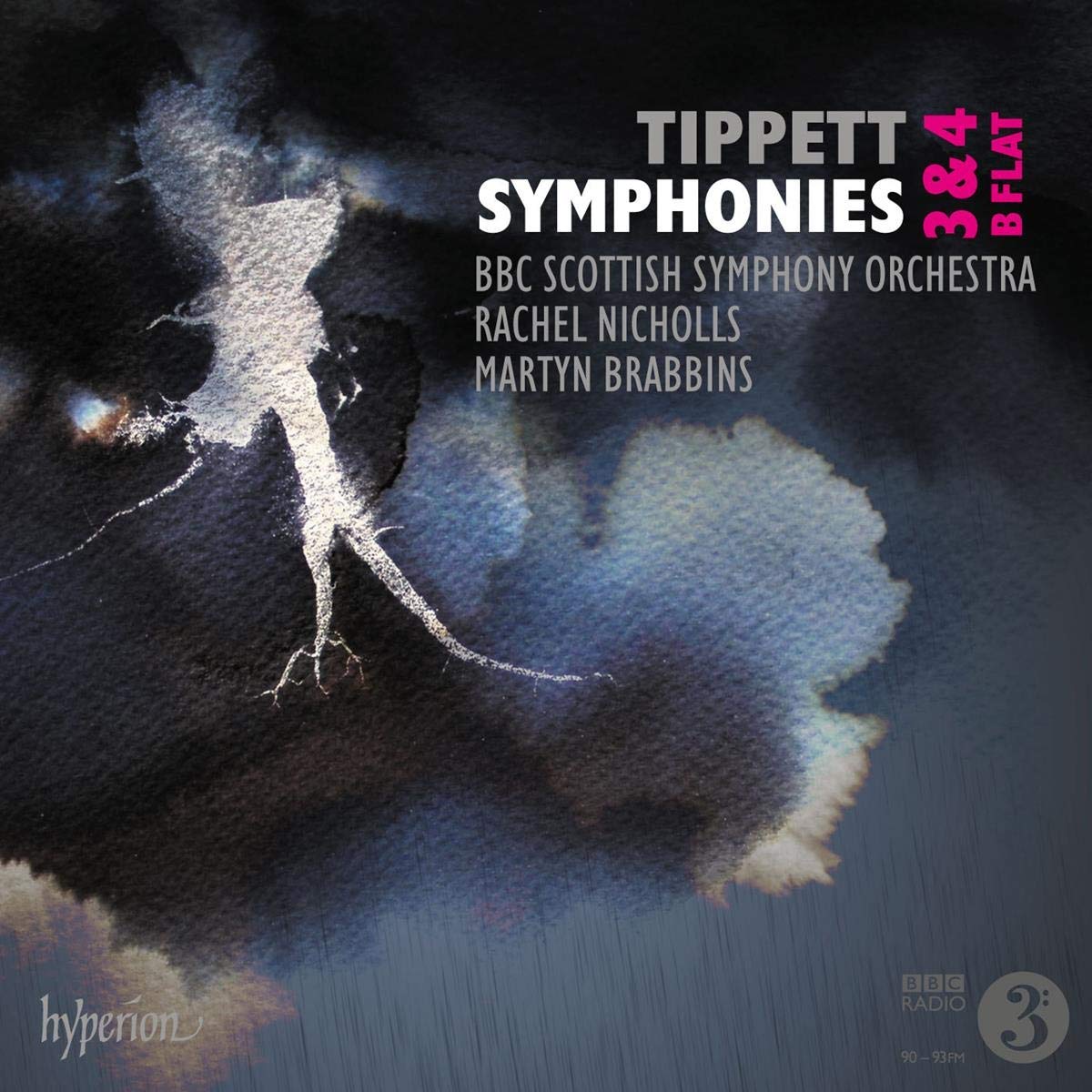 This release from the BBC Scottish Symphony Orchestra concludes Martyn Brabbins’ survey of Michael Tippett’s symphonies, more ‘complete’ than those of Colin Davis and Richard Hickox because it includes the first recording of a Symphony in B Flat, written in 1932-38 and subsequently suppressed by the composer.

Tippett wrote four numbered symphonies. The First and Second are among the greatest 20th-century works in the genre, but while Nos 3 and 4 are examples of his mature art, both are problematic. The Third (1970-72) appeared after Tippett visited America, where he was inspired by that nation’s urban vitality. Part One, made up of two long movements (Allegro and Lento) pulses with energy and sharp-edged harmonic clashes. Part Two is a series of “blues” songs for soprano. Predictably, they sound nothing like the blues, and Tippett’s text is riddled with inadvertent clangers: “I found the beautiful moronic child”, “As I lay down beside my mate” etc. Luckily, Rachel Nicholas’ words are no clearer than Heather Harper’s on the Davis recording, but this piece does evolve into something of a scream-fest.

Symphony No 4 (1976-77) represents a human being’s life journey. Musically it has several moments of serenity and colour, but here the problem concerns the “breathing effect”. When I heard Tippett conduct the symphony in Adelaide he used a wind machine to simulate breathing, but on record conductors choose his preferred option of closely recorded respiration. Inevitably, the recurring sound effect suggests a pervert breathing down the phone. Brabbins’ breather is less sleazy than Solti’s, but I hoped this time it would be the wind machine.

The early symphony, barely recognisable as Tippett, is substantial at 27 minutes. The language is post-Sibelius and Bax. Well-written though anonymous, it is nevertheless enjoyable and historically significant. Brabbins’ performances are taut, gripping and exciting.

Walton's Hindemith tribute gets an outing, Marwood's concerto is a plus.

Eminent Australian pianist Roger Woodward takes his hat off to the genius of Alexander Gavrylyuk.

Hyperion’s admirable Romantic Piano Concerto series has been running for over 25 years. It would be easy to be exercised by the fact that it has taken until now, Volume 70, to arrive at a concerto by a female composer. Easy, but not entirely fair. Male dominance in the genre is almost total – even today – and perhaps more interesting than wrangling over quotas is the question of why. It’s a question this disc answers with vehement clarity. You only have to read the contemporary response to Amy Beach’s concerto – critics reading autobiographical significance into the lone voice of the piano crying out against the oppressive orchestra – to understand that a woman could never inhabit this most combative of musical forms on the same terms as a man. It’s interesting that both other concertos here eschew the traditional three-movement form – an attempt, perhaps, to reclaim and redefine their musical territory. Dorothy Howell’s 1923 Piano Concerto stretches the definition of “Romantic” to its limit. Filmic in scope, an abstract tone-poem drawing heavily on Debussy and Strauss, this single-movement work is the weakest of the three – an attractive showcase for soloist Danny Driver’s limpid touch, and the…

In the mid ‘70s, a BBC TV series called A Place in the Country (a world away from the current naff television series of that name) focussed each week on a stately home (or historic “hice”, as Nancy Mitford would have called it) where decrepit grandees with titles like Lord Rupert and Lady Henrietta languidly reminisced about growing up: “If we misbehaved, Nanny would give us bread and butter for tea, without jam…” The theme music was among the most stirring I’d ever heard and it took me years to discover that it was Elgar’s Concert Overture In the South (Alassio), a work inspired by a holiday on the Italian Riviera, which just goes to show that great music can be used effectively in disparate contexts!  The Mediterranean seemed to liberate Elgar, as his music was never more opulent, warm and exultant, although the Roman legions certainly cut a menacing swathe. The central canto populare with a viola solo (later published as a song entitled In Moonlight) is beautifully handled.  My own favourite recording is by Constantin Silvestri (of all people) with the Bournemouth Symphony Orchestra, closely followed by a mono version with the London Symphony under George Weldon. This version…

Hyperion’s latest Romantic Piano Concertos disc features the work of Henrique Oswald and Alfredo Napoleão. Hailing from Brazil and Portugal respectively, both were born in 1852 and enjoyed fruitful careers as pedagogues, performers and composers. Oswald’s Piano Concerto in G Minor is rich with opportunities to demonstrate musical artistry and Portuguese virtuoso Artur Pizarro executes the solo line with class. It is clear Oswald, like Rachmaninov, knew how to use the form to demonstrate his own ability as a pianist. The soloist has to possess impressive stamina to complete this technical marathon. In the first movement, Pizarro embodies nervous energy as he dances around the keyboard. A brief moment of respite comes in the second movement where the orchestra gently sings the theme as Pizarro plays arpeggios. The BBC National Orchestra plays beautifully under Brabbins with no trace of difficulty in executing the challenges of the third movement. Strident opening chords make it apparent that Napoleão’s Second Piano Concerto is a dramatically different piece. The second movement is cheeky and intimate, while a gentle clarinet solo gives ample opportunity for Pizarro to play with the final movement’s character, colour and texture. This is a terrific concerto and, for this reviewer,…