First staged in 1879 amid consternation, bowdlerisation and acclaim, Henrik Ibsen’s great play of female emancipation was long ago sealed in the aspic of “classic”. Thereafter A Doll’s House has been variously approached as sumptuous costume drama or ripped to shreds in a quest to modernise, the latter often having more to do with the ego of an auteur than any service to the play or its audience. Joanna Murray-Smith’s adaptation is not like that. Rather, she has streamlined an otherwise somewhat stultifying script, paring away excessive 19th-century verbiage and revealing a narrative which is fresh and very much of the 21st century. Fans of Ibsen’s great play are unlikely to be aggrieved, while anyone approaching it on dragging feet is likely to be beguiled as it unfolds. 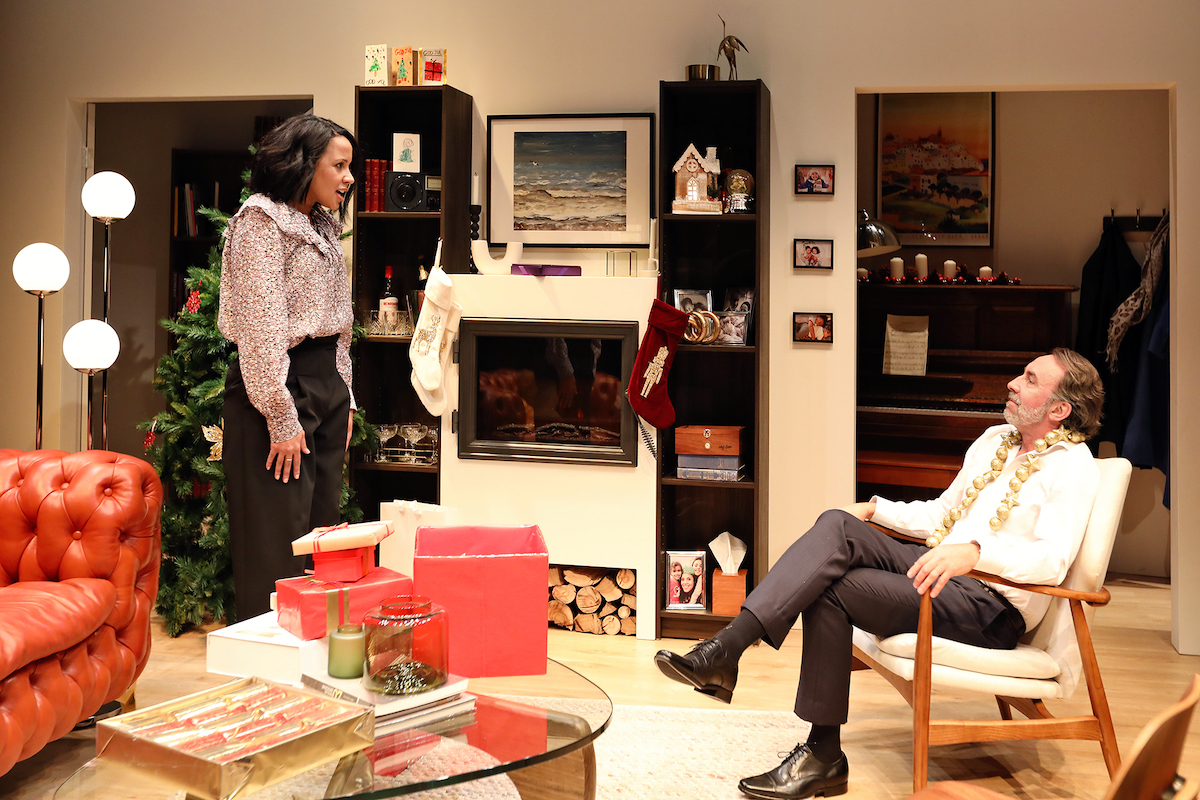 Nora (Chantelle Jamieson) is the younger wife of Torvald (James Lugton), a lugubrious gent we would recognise as a workaholic whose home office is his refuge. It’s Christmas and Nora has been shopping. She returns laden with many bags and much exuberance. Torvald is patronisingly amused yet he’s also a bit of a stram rumpa (as they say in old Norway, as in “tight arse”) and her habitual extravagance is alarming.

Nora is blithely unconcerned. Post the Royal Commission into banking, Torvald is a respected cleanskin who is about to be appointed to head a bank. Money worries are no longer their concern. Nora tells of their good fortune to her old friend Kristina (Lizzie Schebesta) who arrives out of the blue in a forlorn state as a penniless widow. Nora quickly tells Kristina that Torvald has been ill – they haven’t had it so good either – and because of that, she is in an unspecified pickle of her own.

The next unexpected arrival is George, Torvald’s close friend (Tim Walter). He is ushered into Torvald’s study for man time leaving Kristina to try to get out of Nora why she is so agitated about money. Finally, another knock on the door heralds the entrance of Krogstad, a bank employee (David Soncin), who also wants to see Torvald. More than that, it’s obvious from their interaction that he and Kristina have history.

So far, so comfortably middle class. On a set by Veronique Benett that is a clutter of mismatched and misaligned nicknacks and furnishings – a visual picture of Nora’s restless discontent – events begin to quietly spiral out of control. Revelations of past hurts and misdemeanours surface and the apparently agreeable domesticity of Torvald and Nora’s lives becomes vulnerable. Naturally, the problems are about money and social status, although Torvald dresses up his concerns with an overlay of tooth-aching moral certitude. That George is not only fatally ill but in love with Nora doesn’t help the atmosphere of escalating anxiety, nor the disclosure of hidden connections between Krogstad and both Nora and Kristina.

While a worst-ever Christmas unravels, Nora dances as fast as she can to keep her world together. She is a febrile, brittle doll whose knowingly coquettish behaviour is a trap for her even as it bewitches the men. The contrast between Nora and the morosely plain Kristina is stark; neither is happy, yet Kristina’s pragmatism promises a future that will at first evade Nora and which she will finally, shockingly, repudiate.

Jamieson is electrifying and disconcerting as the skittish young woman who cannot tolerate silence or stillness for what they may reveal of her. Schebesta is her foil: preternaturally calm, almost sinister, palely watchful. The anchor in this unlikely maelstrom is Lugton’s Torvald, a man whose certainty is embedded deep in his masculinity and pride. And from their polar opposite positions, Walter’s George and Soncin’s Krogstad shore up and finally undermine Torvald’s alpha status.

Nevertheless, after Kristina has mended and made over Nora’s “fancy dress” for the big party and Nora is clad in the Victorian gown and for the first time resembles a 19th-century image of womanhood, it is the apparently fragile doll who rises above the demands of patriarchal culture (and yes, it still is) to slam a door in its face and do the unthinkable.

Murray-Smith and director Mark Kilmurry have combined to re-invent A Doll’s House in a way that honours the original while also fashioning a play for today through a script and company that bring out the best from every facet of the production. Verity Hampson’s lighting of Nora’s living room enhances its irony, while Benett’s costumes provide visual clues to each character. Bookended by Daryl Wallis’s pyretic musical fragments, A Doll’s House is a revelation and reminder that while we’ve come a long way, baby, there’s still a long way to go. Recommended.

A Doll’s House plays at the Ensemble Theatre, Kirribilli, Sydney until 16 July.