A Letter For Molly is a bold step into the future for the Ensemble’s Artistic Director Mark Kilmurry, playwright Brittanie Shipway and the play’s director Ursula Yovich. There was a time when a play, which is not only new but also by, featuring and about First Nations women would have been the kiss of death for many theatre companies – the Ensemble in particular with its theatre-mad but conservative audience base. Not any more. How times have changed. 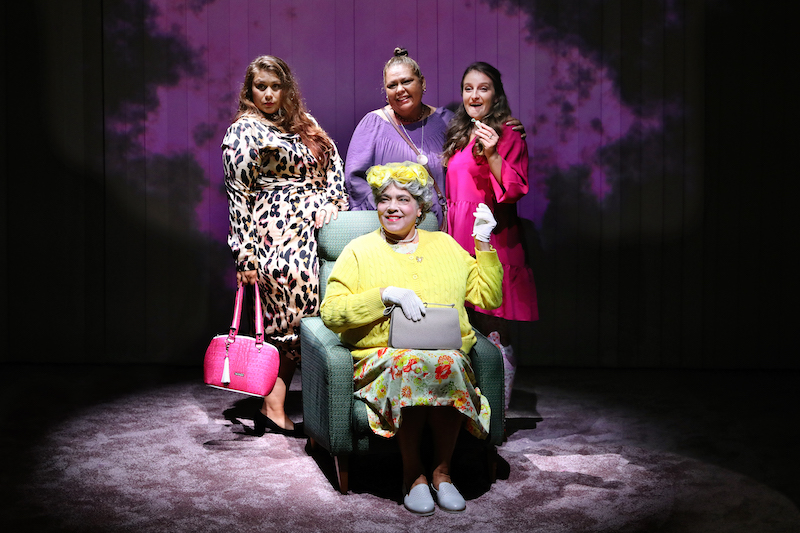 The show opens on an empty stage, backed by the wall of vertical blind slats (shared with the alternating production Still Unqualified). Shipway and Yovich anchor the opening in a timeless setting of women – Miimi (Lisa Maza) Darlene (Paula Nazarski), Linda (Nazaree Dickerson) and Renee (Shipway) – gathered around a bush camp fire. A smoking ceremony offers serenity in the flickering light as they sit, surrounded by the dark and the eyes that watch – as many generations in the audience as on the stage. So far, so familiar, but then…

Renee is a modern party girl whose best friend and partner in all things excessive is Nick (Joel Granger), a ditzy fun boy who twirls around their bathroom while a horribly hung over Renee attempts a test to see if it turns pink. This is pre-COVID and it’s pregnancy rather than coronavirus that Renee fears.

From this very funny depiction of young urban adults – who could be any ethnicity yet very Australian – are interwoven, back and forth, the stories of her mother and grandmother. They represent an unexpectedly universal portrayal of working class women for whom a tough life and independence are a given, as is a 20th century form of smoking ceremony: the ever-present packs of Winnie Blues and Bic to be passed around and squabbled over.

Miimi is a classic old duck of the shampoo-and-set and handbag brigade who enjoys her TV soaps and loves the Queen. She is soft as butter with Renee; with the middle generations, not so much. Shipway has a keen ear and eye for the nuances of generational irritations as well as inter-generational love and grudging respect. Mothers and daughters of all ages will be digging each other in the ribs as the jokes and barbs fly from a script that suggests a major new talent in the singer-actor, now playwright, Shipway; and also another amazing thing to have emerged from the past two years’ enforced lockdown.

First-time director Yovich is also a revelation: her light but sure touch draws modulated, compelling performances from each actor as they traverse the years, heartaches and joys of their lives. The show moves easily from scene to scene with plenty of space given to the audience for the laughter and lumps in the throat that punctuate the action. Costumes and discrete set elements (Hugh O’Connor), lighting (Kelsey Lee), video backdrops (Morgan Moroney) and soundscape (Brendan Boney) all add to a rich and richly entertaining 90 minutes.

All in all, A Letter To Molly is a remarkable achievement for its author and the entire team. It suggests a talent that can only grow and go on to excel in the future. And also a way of telling Indigenous stories that is at once specific, uncompromisingly honest and all-embracing, and exhilaratingly original. Recommended without reservation.

A Letter for Molly runs at the Ensemble Theatre, Kirribilli, Sydney until 4 June.