If you composed a soundtrack to your life, filled with brief momentous occasions how would it generally sound? A happy-go-lucky ditty like that of Strauss’s Till Eulenspiegel? Or perhaps something more magnificent like Mussorgsky’s A Night on a Bald Mountain? A Moment in Time explores some of life’s defining moments with a particularly poignant program from Southern Cross Soloists’ dynamic Director Tania Frazer as we reflect and still feel the impact of the last few years of COVID chaos. 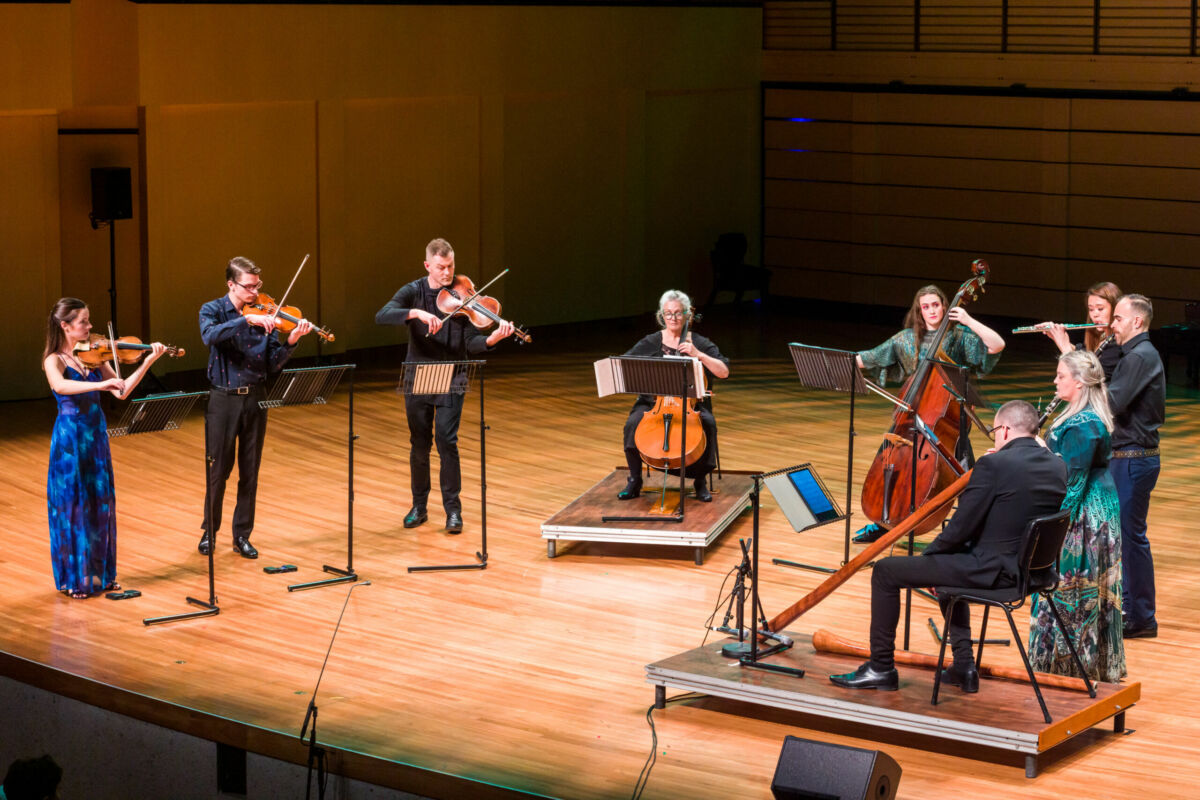 Unfortunately, the Southern Cross Soloists program and performers are still not immune from the chaos with more musicians incapacitated by COVID. Whilst we can celebrate the return of clarinettist Ashley Smith from his two-year confinement in Western Australia and French horn player Nick Mooney from his London auditions with the London Philharmonic and the London Symphony Orchestras, there were some urgent last-minute substitutions.

Alan Smith was replaced by the dynamic Kiwi violinist Amalia Hall, and guest artist Julia Janiszewski was replaced by the eminent cellist Sue-Ellen Paulsen, who has fortuitously returned to Queensland after 33 years with the Tasmanian Symphony Orchestra. The fabulous young emerging flautist Jessica Walther also replaced Jonathan Henderson, and his performance of Tchaikovsky’s Lensky’s Aria has been postponed until later in the year.

Two witty virtuoso arias di bravura  by Vivaldi opened the concert, taken from from two of the composer’s 20 surviving operas – and demonstrated what a pity it is that the rest of the 94 he is claimed to have written have vanished. Vedrò con mio dilettois (“I will see with joy”) from the opera Il Giustino (also known as Anastasio) and Alma oppressa da sorte crudele (“Soul oppressed by cruel fate”) from La fida ninfa (The Faithful Nymph).

Johan Halvorsen’s Passacaglia for violin and viola after GF Handel replaced Lensky’s Aria. With only two days to practice, both violist James Wannan and violinist Amalia Hall stunned the audience with their synergetic duet. Passacaglia is composed of 12 variations of repeated chord progressions, and showcased the musicians’ virtuosity as both raced through the registers, demonstrating a range of techniques until hitting the stratospheric tones in a series of double-stop sixteenth notes for a dramatic conclusion. The audience was stamping and clapping in jubilation at the incredible performance.

As Leah Curtis wrote in Limelight recently, her work The Ground was inspired by our “re-emergence into a changed world after the lockdowns”. Curtis’s work was commissioned as part of Southern Cross Soloists’ (SXS) Didgeridoo Commissioning Project, coming hot on the heels of the success of Sean O’Boyle’s ‘Beerwah’ The Mother of the Glasshouse Mountains. With the Olympics arriving in Brisbane in only ten years, Southern Cross Soloists are commissioning three Australian orchestral didgeridoo-focused compositions a year for the next decade, with the aim of creating a unique repository of First Nations orchestral music to be showcased to the world. Frazer is asking for sponsors to help fund recording this significant catalogue of national importance.

The ground-breaking music was a collaboration between the acclaimed Australian Los Angeles-based film composer Leah Curtis with SXS Didgeridoo Artist in Residence and Wakka Wakka man, Chris Williams. The piece was composed remotely across the continent via the internet.

Williams’ long thin bloodwood didgeridoo whispered amongst the trees summoning in pensive strings. The deep guttural tone of the low-A instrument shuddered and moaned until it was swapped to a smaller D-pitched didgeridoo that raced and stuttered. Ashley Smith’s clarinet chimed out over crying violins, until fading to leave the didgeridoo’s sonorous waves echoing and whooshing to a distinct silence – broken only by the cries and cheers from the audience. Frazer commented that the incredible new piece had the didgeridoo making sounds she had never heard before!

Another highlight of the concert was SXS Artist in Residence Konstantin Shamray performing Chopin’s Piano Concerto No 2. The incredibly intricate piece was borne of unrequited love by the 19-year-old Chopin infatuated with Konstancja Gladkowska, a singer in his classes at the Warsaw Conservatory. He describes regretting only telling the piano his feelings, pouring out his passion in three movements with the first oozing with the yearning of unrequited love through stark dynamic contrasts. 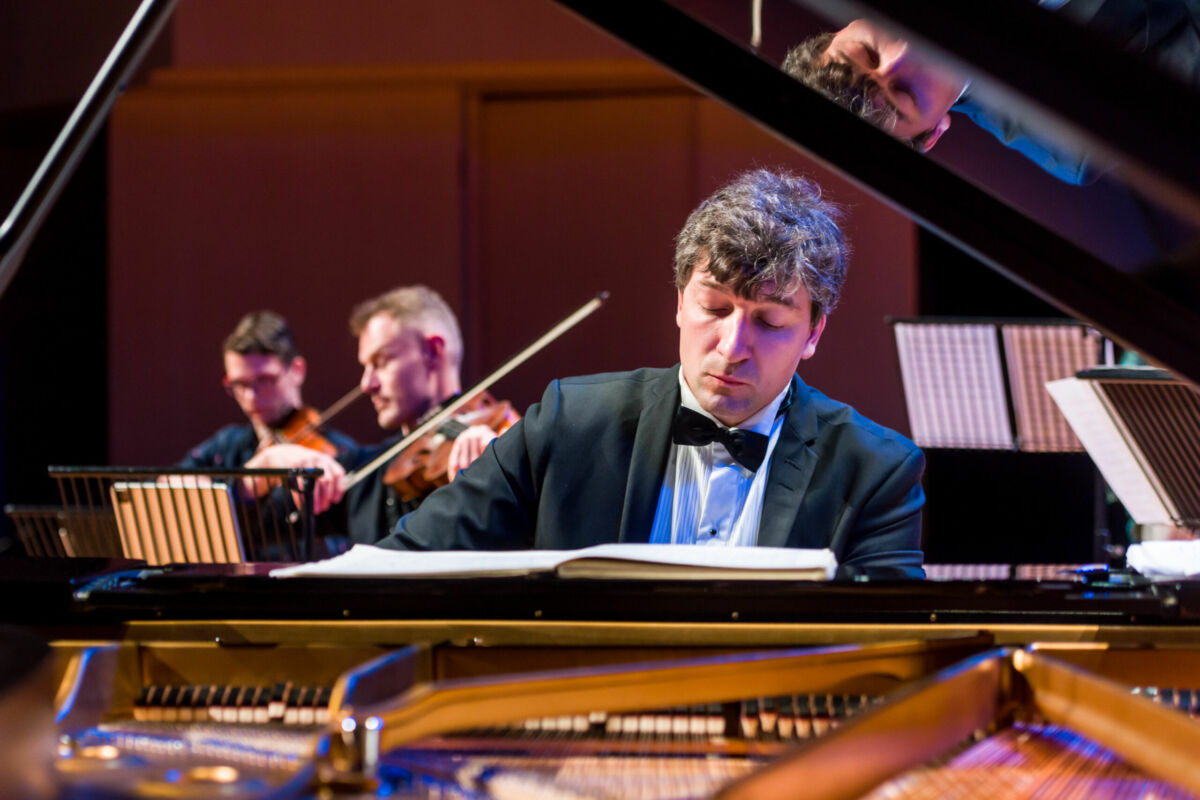 Shamray has an enigmatic eloquence for the piano mimicking Chopin’s pent-up frustrations and desires through the keys. His fingers flew over the keyboard in a blur in the second delicious movement encapsulating Chopin’s passion for a first love. The rustic Polish mazurka dance style is evident in the torrential third movement. The French horn and clarinet strained passionately whilst the piano cascaded and tumbled and the strings played col legno using the wood of the bow. Tumultuous applause and more foot-stamping greeted the Southern Cross Soloists, welcoming the virtuosity of each musician.

Richard Strauss’s Till Eulenspiegel’s Merry Pranks was a jovial end to the concert, arranged by SXS Composer in Residence John Rotar. Full of cheeky notations and merriment the tone poem describes the 14th-century historical larrikin Till Eulenspiegel, who whilst living as a vagrant relished performing harmless pranks on his travels. It was based on a 16th-century English tale by Wyllyam Copland, A Merry Jest of a Man called Howleglass. The music epitomises the much-loved rapscallion approach of Australians, often jesting and joshing through life.

Nick Mooney’s French horn encapsulated the cheeky nature of Till, whilst the smaller ear-piercing E flat clarinet of Smith’s was his voice, cackling and sniggering at each naughty prank. The music moves from a sly creep to a blast of the horn and a smirk from the clarinet, with each successful jest. As Frazer introduced the piece she said it was fitting that the two should share the role of the rogue, with Mooney being the Peter Pan of the SXS ensemble!

The strings maintain the story with a repeated ‘once-upon-a-time” theme with a fabulous flirtatious flute from the young Jessica Walther. Eventually, it all catches up with Till, resulting in the gallows. The music twists and turns as he fights off the inevitable with his mischievous motif having the last laugh.

It was an enthralling concert from the Southern Cross Soloists highlighting the virtuosic skills of the musicians to aurally encapsulate an emotive moment in time.

The Southern Cross Soloists’ next major event is the 19th Bangalow Music Festival on the 11th-14th of August, returning after two years of postponements. More information.

James Wannan’s devilishly difficult execution seemed effortless on the viola, earning him MVP (Most Valuable Player) of the concert, with Konstantin Shamray coming a close second!