Ottorino Respighi’s Fountains of Rome (1916), the first of his three famed tone poems on Roman themes, was a fine starting point for this compelling Adelaide Symphony Orchestra concert, as it induced in the listener a sonically attentive and visually imaginative state. Respighi’s music is inspired by and pays homage to that fabled city and its ancient history, legends and mythology. The Fountains of Rome is a work of great orchestral colour and vitality, portraying these glorious landmarks at times of the day that bring out the best in each, and characterising the themes and stories depicted in them. 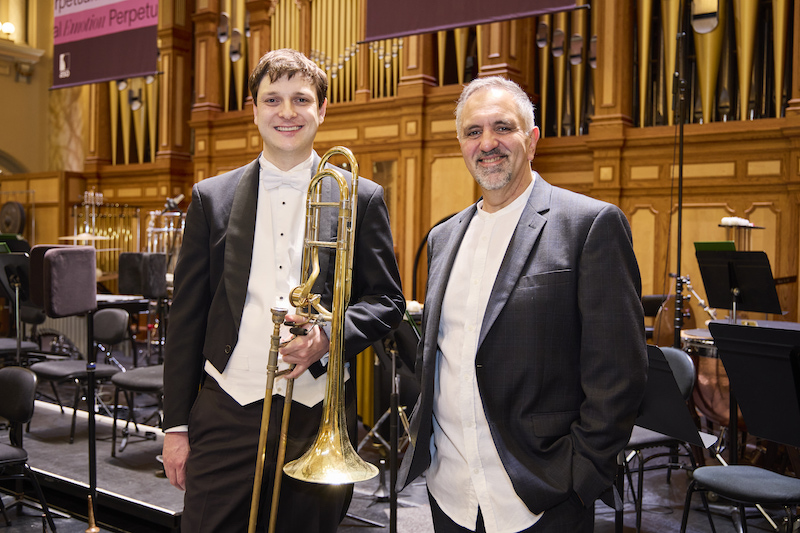 With our ears and minds thus opened, we then heard the world premiere of renowned Australian jazz pianist Joe Chindamo’s Ligeia Concerto for Trombone and Orchestra, which proved to be the centrepiece of the concert. Commissioned by the ASO, Ligeia is in three dramatic movements: Animato, Adagio/Valzer de Ligeia/Cadenza and Attacca/Avventuroso and it was inspired by Edgar Allen Poe’s story of that name. The concerto evokes the supernatural nature of Poe’s story, which concerns a beautiful and intelligent woman who falls ill and dies, only to seem to revive in the form of another woman. Evidently the narrator in Poe’s story is affected by opium, so it’s unclear whether the narrator is describing a hallucination. In his program note, Chindamo cited several other influences in his work, including Poe’s theme of duality, the traditional use of the trombone in settings of the Requiem Mass, and Jung’s idea of the ‘shadow self’, and says he intended his writing for the trombone to portray various personalities grappling with their shadow selves. The music is polystylistic, and Chindamo thus condenses many quite profound themes and compositional approaches into the one work.

The first movement of Ligeia proceeds at an energetic rhythm inflected with jazz-like syncopation, with the trombone in the role of narrator sounding at times comical and at times more serious. The second movement is a waltz, but slow and subtle, and it’s more about the idea of the waltz than a danceable piece of music. The effect is to suggest a meandering, romantically distracted mind, and the ‘narration’ thus becomes an introspective conversation, as the trombone interacts with a range of orchestral voices. The concerto shifts from tuneful major key melodies to minor keys and chromatic passages, with moments that variously recall Gershwin, Shostakovich, and movie themes. But these stylistic effects are subtle rather than the focal point of the work, and Chindamo adroitly weaves all these ideas and effects into a coherent whole. The musical polystylism acts as an analogue for the cascading visions and emotions in the mind of Poe’s narrator.

Audience members were offered earplugs on entry to the concert – the trombone is a loud instrument, and the orchestra was at full volume in several passages. In composing the concerto, Chindamo suggested that he wished to take full advantage of the virtuosic capabilities of the soloist, ASO principal trombonist Colin Prichard, and Prichard proved to be outstanding in this immensely demanding work. Conductor Brad Cohen and the ASO were equally outstanding in realising Chindamo’s complex score. This concerto is a magnificent addition to the repertoire and will surely be performed many times. 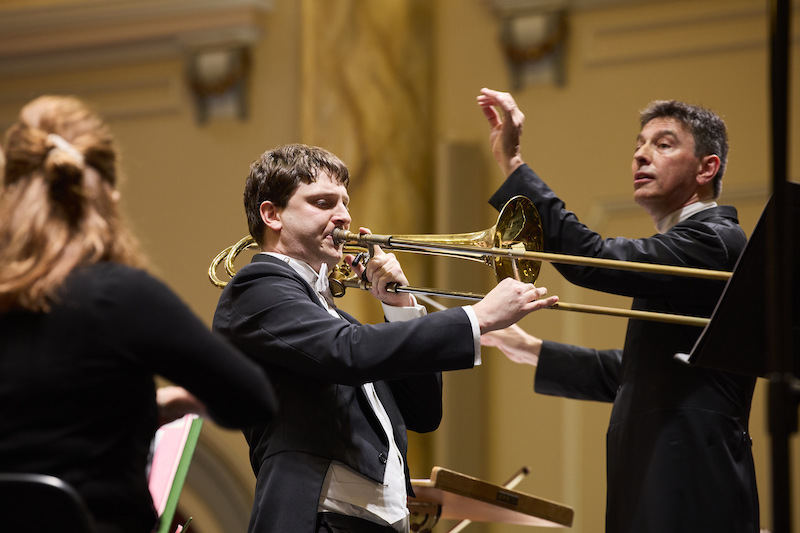 This concert, conducted by Brad Cohen, also introduced us to the fascinating and unique sound world of UK-based Australian composer Lisa Illean, whose music is so different from that in the rest of the concert. Her work is typically quiet and involves micro-tunings, the frequent use of glissandi and contrasting sonorities, and has the effect of heightening one’s perception of sound. Her Land’s End (2016) for chamber orchestra, commissioned for the Sydney Symphony Orchestra, evokes the rocky edge of that southwestern tip of England with its lapping waves, damp, salty air and shimmering light. The music evolves slowly, any rhythms are barely perceptible, sounds drift in and out of awareness, and one’s attention is drawn to the harmonics and the textures created by the combinations of instruments. The overall feeling is that the world is moving in slow motion, so that we become more attuned to it.

The segue from Land’s End to the final work of the evening, Jean Sibelius’s Symphony No 5 in E flat (Op. 82), seemed entirely natural. Listening to Sibelius’s Fifth Symphony, we find ourselves immersed in the Finnish landscape, with its innumerable lakes and forests and its seasons of spring growth, brief summer sun and dark, snowy winter. It also reminds us of the Kalevala, the epic poem of Karelian and Finnish mythology, that inspired so much of Sibelius’s music, and the steady repeated rhythms of the second movement suggest the forward motion of life. Under Cohen’s baton, the ASO’s resounding performance recreates Sibelius’s magic, and the orchestra’s performances throughout the concert were insightful and superbly wrought, the program reminding us of how music can recreate the world around us.