Playwright Lewis Treston has made his mainstage debut with an entertaining Australian adaptation of Oscar Wilde’s An Ideal Husband at La Boite’s Roundhouse Theatre. Directed by Bridget Boyle with her signature comedic flair, and with dramaturgical consultation by Saffron Benner, this high-energy adaptation transplanted the tale of politics, principles and power to a fictionalised Canberra in the lead-up to the 1996 federal election. 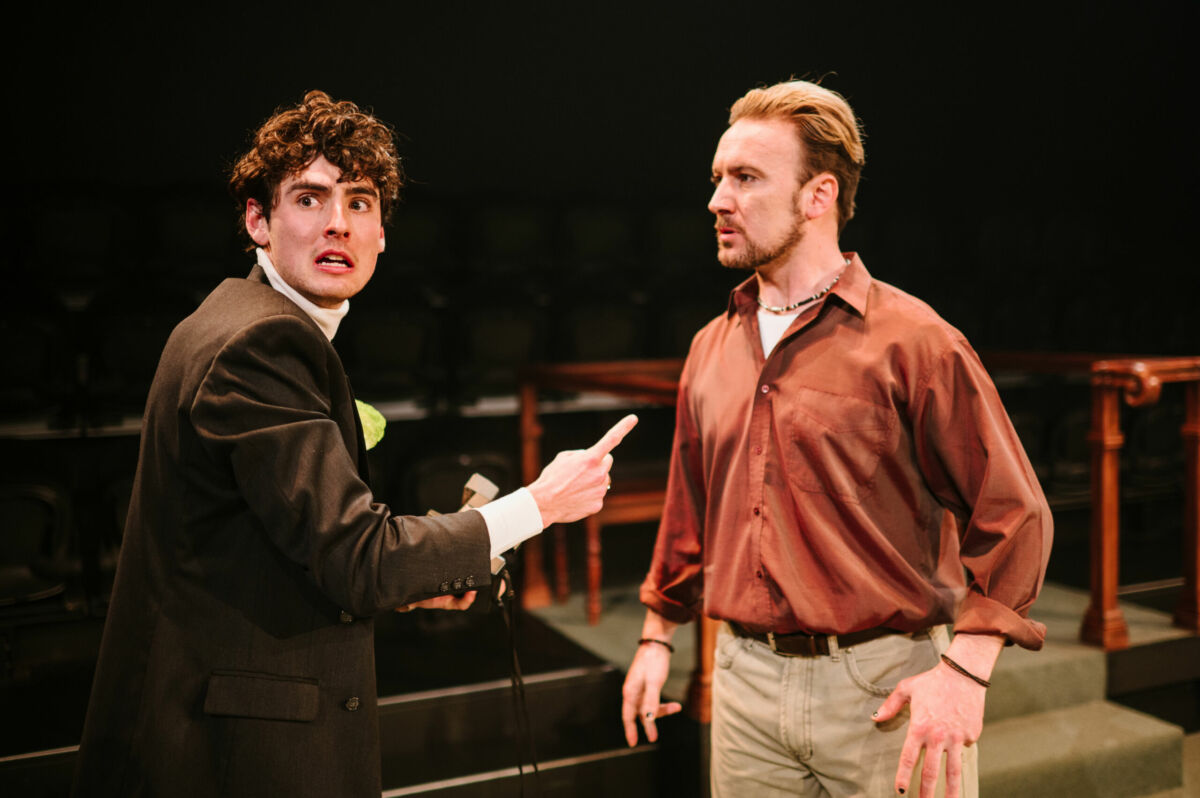 Arthur ‘Artie’ Whig, a young man of leisure, has been given an ultimatum by his politician father – get a job and get married, or have his allowance cut off. In the meantime, Artie’s best friend Mabel has proposed to him – a marriage of convenience, since they are both interested in men – and he is trying to help another friend, Minister for the Environment Robyn Shi, who is being blackmailed by Artie’s former lover, Lucian. Plagued by a potential scandal from her past, Minister Shi is also struggling to maintain her relationship with her idealistic partner and political advisor, Gertrude Chiltern. With the help of a journalist, who finds himself embroiled in the brewing scandal, Artie seeks to turn the tables on his ex, secure his friends’ political futures and continue his carefree life in pursuit of pleasure.

The play took light-hearted jabs at arts academia and included a scattering of political quotes and references from the 90s and more recent years, delivered with a knowing wink. Minister Shi’s fight to save the habitat of the Delma Impar legless lizards was used as both a literal environmental concern and a metaphor for immigration policy, and the work tapped into debates that remain ongoing.

Like Wilde’s play, this modern iteration of An Ideal Husband dealt with ideas of power, corruption and hypocrisy, as well as the dichotomy of living for principles and living for pleasure. Significantly more risqué than its source text, Treston’s play maintained most of the key plot points and themes, all tied up in a 90s romcom finale at the airport. While aspects of the conclusion differed from the original, and there were a few overtly crass jokes that didn’t contribute to moving the story or characters forward, the work continued to play with the tension between the past and the present, and the financial and moral price of gaining and maintaining power.

While Wilde examined ideas of gender and youth as they related to love and power, the cast of queer characters in Treston’s An Ideal Husband faced a more complex set of potential scandals. The threat of being publicly outed, as well as the murky morality of using this bargaining chip against others in the community, was a recurring theme. Robyn Shi was established as Australia’s first female Asian minister, as well as being a closeted gay woman, and these aspects of her identity compounded to threaten her career in ways that did not impact her heterosexual, white, male peers. 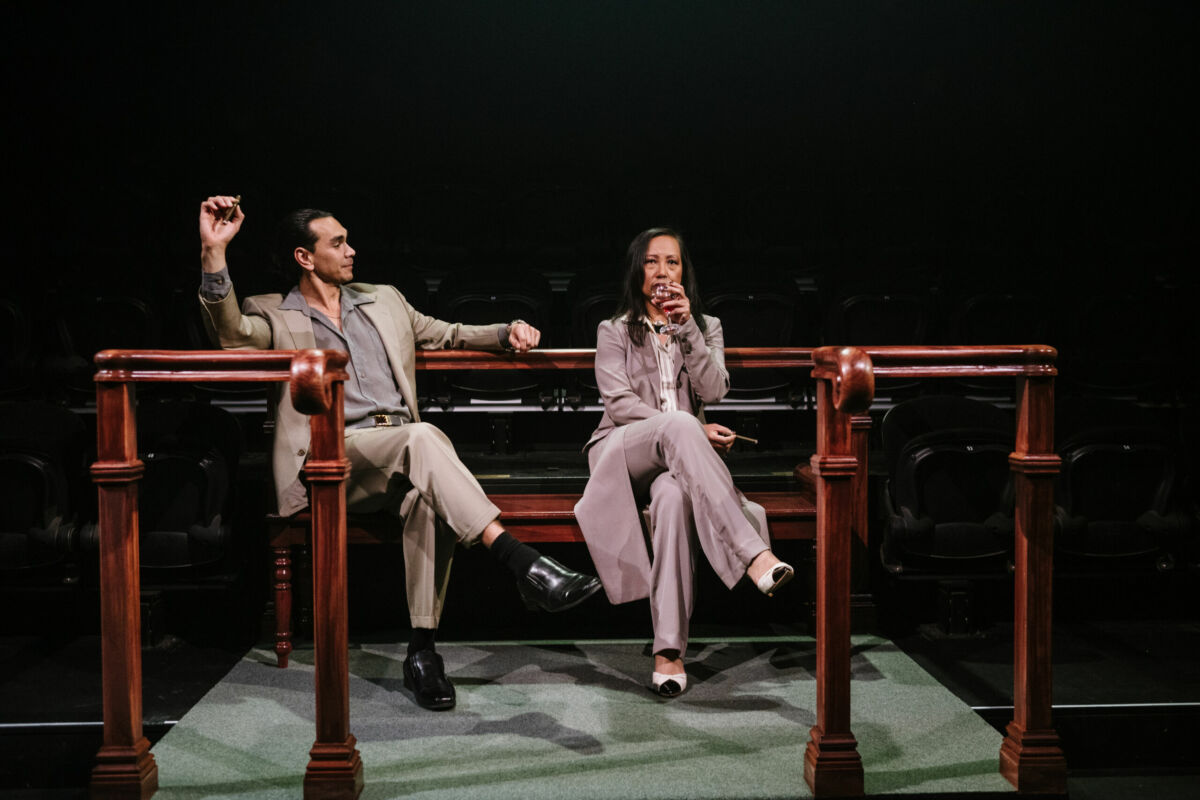 An Ideal Husband was performed in the round, which occasionally made it difficult to hear, but all of the performers projected their voices well and the open set and deliberate blocking ensured the momentum of each scene was clear from all angles.

Will Carseldine was wonderfully melodramatic as Artie Whig, Billy Fogarty gave a sharp performance as the charming Mabel Lloyd, and the two had a theatrical chemistry throughout. Emily Burton played highly strung Gertrude Chiltern, intense and idealistic, and her school captain speech was a highlight. Hsiao-Ling Tang, by contrast, brought a grounded energy to their relationship and to the House of Representatives as Minister Robyn Shi, although she occasionally slipped into an ocker accent in the first act.

Christen O’Leary was hilarious as Dame Tara Markby, recast as the coked-up widow of a former Prime Minister, and Kevin Hides was gruff and earnest as Artie’s father John Whig, a Katter-esque, National Party man. Patrick Jhanur was suave as Lucian Chevely, and Kevin Spink played the role of Douglas Harris, a journalist with a Scottish accent, frosted tips, and an infatuation with Artie, to great comedic effect.

Treston’s script included nods to Wilde’s original, from Artie’s buttonhole to the search for a hock and seltzer, as well as quips from his other well-known works. The playwright wrote in his programme note that Wilde’s “sparkling dialogue is overwritten” and, although the portions that were included verbatim occasionally grated against the modern language of the adaptation, they were effectively integrated overall. Treston also wrote that the intention of this production of An Ideal Husband was to be bolder, faster, and sexier than the original and, although the pacing was varied in the first act, there is no doubt that the cast and creatives have achieved this goal. 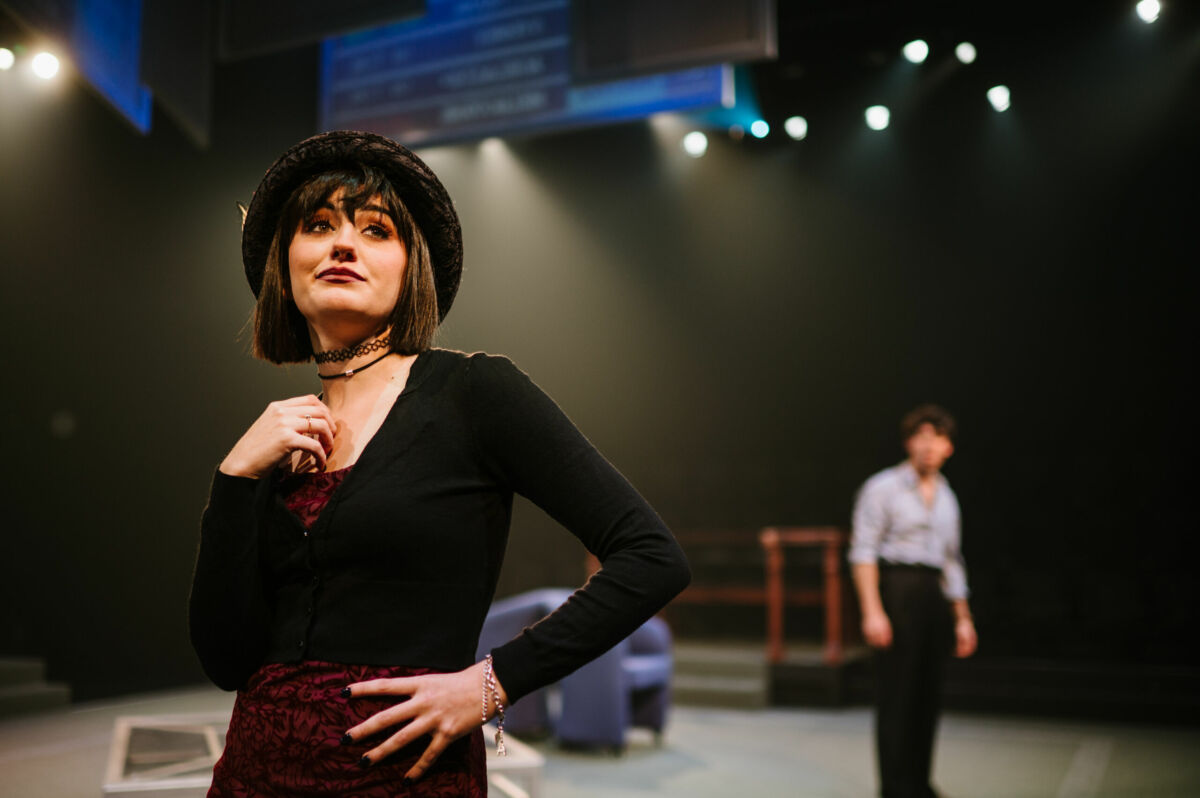 Set and costume design by Chloe Greaves transported the audiences back to the mid-90s with fashions and trends of the era, from plastic chokers and a yellow plaid two-piece à la Clueless to John Howard’s iconic green-and-gold tracksuit and props that included Discmans, fax machines and a Polaroid camera. A central raised platform on the carpeted stage was used in versatile ways, and the audience space was also incorporated in the staging.

Lighting design by Jason Glenwright and sound design by Guy Webster contributed to the setting of each scene and created neon-bright transitions, accompanied by a thumping soundtrack of nostalgic 90s hits that extended into the foyer. AV design by Justin Harrison was projected onto a series of screens suspended above the stage and added to the scenery, from the pale green of the House of Representatives to the questionable PowerPoint transitions of political functions. Choreography by Neridah Waters kept the energy high all the way to the curtain call and, with fight and intimacy coordination by Nigel Poulton, contributed to some memorable comedic moments within the work.

Lewis Treston’s An Ideal Husband blended Wilde’s wit and philosophising with 90s pop culture and Australian politics for a funny and light-hearted examination of principles, power and political corruption.

La Boite Theatre Company’s An Ideal Husband is at the Roundhouse Theatre, Brisbane until 6 August.