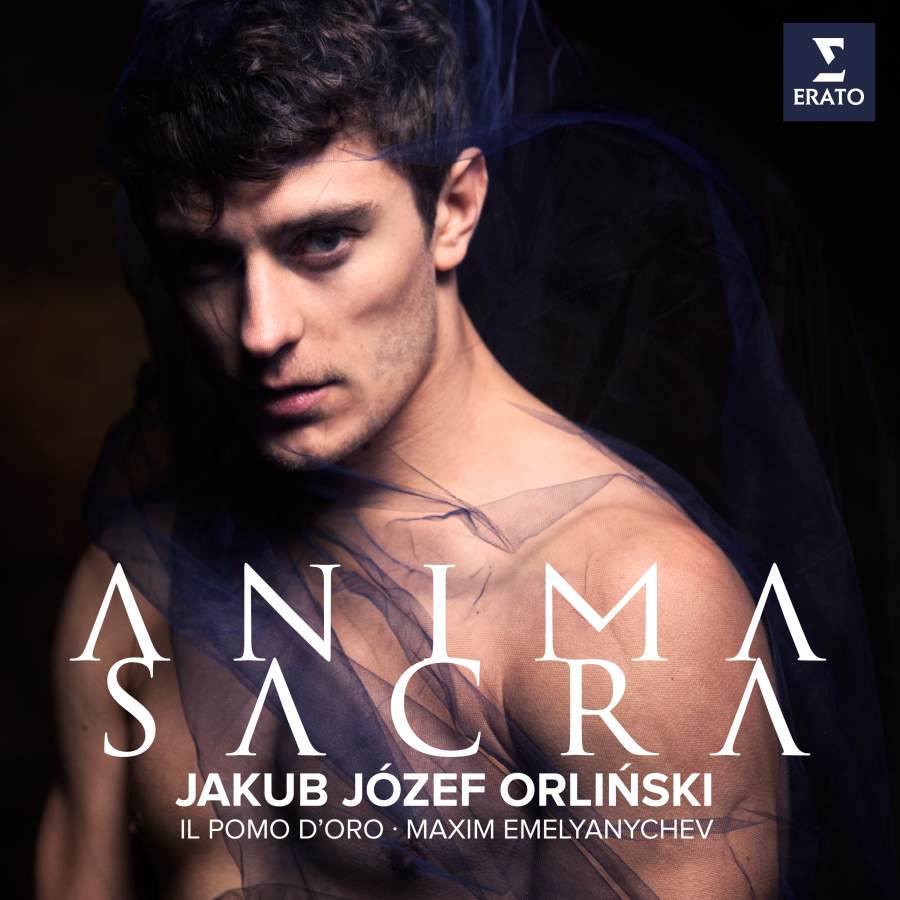 Polish countertenor Jakub Józef Orlin´ski has been making waves. A 2016 win at the Metropolitan Opera National Council and more than two million YouTube views of a live performance of Vivaldi’s Vedrò con mio diletto have set hearts aflutter – and that’s before you see the buff, shirtless photoshoot that accompanies this, his recording debut! Joking aside, when you launch with a recital of unknown sacred arias by mostly forgotten composers, you’d better have either dug up some serious treasure or have a voice of gold. In this case the treasure is of most impressive value and the voice is more silvery of stamp, but it’s one well worth investing in.

In fact, the repertoire is remarkable, with eight world premiere recordings, and although Zelenka and Hasse are relatively known quantities, I’ll admit to never having heard of the Neapolitans Fago or Feo. Orlin´ski opens with a ravishing aria, ravishingly sung from Nicola Fago’s Il Farone Sommerso. The same composer’s highly attractive seven-movement Confitebor Tibi, Domine is quite a find, as is his Tam Non Splendet Sol Creatus with its radiant lullaby, Dum infans iam dormit. Other gems include Zelenka’s magnificent 11-minute S’una sol sol lagrima (with wonderfully plangent oboes) from his Gesù al Calvario, Hasse’s dramatic Mea tormenta, properate! from Sanctus Petrus et Sancta Maria Magdalena, as well as fine works by Heinichen and Terradellas.

Orlin´ski’s voice is smooth, fluid and bright, a cross between the purity of Andreas Scholl and the communicative nous of Cecilia Bartoli (his diction is exemplary). Clean and clear as a bell, he’s perhaps at his best when spinning a long lyrical line (the coloratura is securely managed rather than thrilling). There’s an occasional flutter in the voice at times, but nothing too disturbing. Il Pomo d’Oro under Maxim Emelyanychev provide superbly incisive support and the recorded sound is convincingly natural. Definitely one to watch.

Mezzo-soprano superstar Joyce DiDonato’s latest album of Baroque opera arias started life as a project to bring to light some Neapolitan rarities, but it took a swift hairpin turn in November last year following the brutal terror attacks in Paris. The Kansas diva and the crack Il Pomo d’Oro under their exciting young Russian Chief Conductor Maxim Emelyanychev ditched the programme and came up with a selection of “war and peace” arias, all of them sending a strong message in troubled times. “As I have tried to convey in this selection of music, the power to bravely tip the scales towards peace lies firmly within every single one of us,” DiDonato says. Drawing mainly on much-loved arias from Handel and Purcell, the mezzo is in sizzling form, attacking the bellicose material with gusto. She looks like a lioness in profile on the cover and that is the feeling she brings here – you’d be a fool to mess with her! In stark contrast the “peace” songs, including back-to-back “swoon” tracks of Dido’s Lament by Purcell and Handel’s Lascia ch’io pianga from Rinaldo, are delivered with a glorious mixture of grace and irresistible sweetness. She does include some rarities – a “war”…

Handel’s Partenope is one of those inexplicable rarities. A tuneful, light romance, it has everything that one could want from a Baroque opera – love, intrigue, cross-dressing… Back in Handel’s time, however, the opera claque had it in for the piece. “Senesino put me in a sweat in telling me that Parthenope was likely to be on the stage, for it is the very worst book (excepting one) that I ever read in my whole life,” sniped the rival Academy’s purse-lipped Italian agent Owen Swiny. Poppycock, said Edward J Dent who described it in 1959 as “perhaps the best libretto that Handel had ever set,”likening it to Shakespeare no less. As always, the truth lies somewhere in-between. A tale of love, jealousy and betrayal, the plot revolves around the un-historical titular Queen of what would become Naples and her three suitors. Arsace, Prince of Corinth is the front runner, but when Rosmira, his former betrothed arrives disguised as a knight, it throws the field wide open. Arsace is forced to dissemble rather than admit his falsehood, and Partenope’s affections are diverted towards Armindo, the timid Prince of Rhodes. After Arsace forces Rosmira to reveal her identity by challenging her to…

Handel’s Tamerlano, written for the Royal Academy in 1724, is something of a secret pleasure for fans of 18th-century Italian opera. Lacking the magical stage machinery of the likes of Rinaldo, and with a low quotient of showcase arias to tickle the sensation seeker’s ear, it nevertheless has a claim to greatness. Why? It has one of the composer’s most grimly determined plots and a set of characters upon which Handel lavishes his utmost psychological insight.  In 1402, the Mongol herdsman Timur defeated his enemy, the Turkish sultan Bayezid, who history relates he had carted around in a cage for months afterwards. In the opera, the wicked (i.e. Eastern) tyrant Tamerlano has designs on Bajazet’s daughter, Asteria, and sends his ally, the Greek (hence noble) Andronico to convey his desires to the maiden and her vengeful father. Unbeknownst to Tamerlano, Andronico is himself in love with Asteria and from these complications a tense, potentially bloody political opera ensues.  Handel wrote the work at speed, as was his wont, but revised it at his leisure on more than one occasion in order to create as tight a musical drama as he was capable of. It culminates in a thrilling scene of…