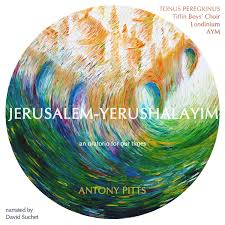 Antony Pitts is something of a musical polymath: composer, choir director, conductor, teacher and radio producer are some of the strings to his musical bow. He may be best known to Australian audiences as Artistic Director of The Song Company, a role he took up in 2016. Pitts is also a man of deep religious faith, which led him to resign as a producer at the BBC in 2005 in protest at the broadcast of Jerry Springer: The Opera, a work he believed blasphemous.

Pitts’s faith is also at the centre of Jerusalem-Yerushalayim. Textually, the work uses the Jewish (and by extension, Christian) scriptures to evoke the city regarded as holy by Jews, Christians and Muslims, beginning with the genealogy of Abraham and concluding with Isaiah’s vision of a peaceful Jerusalem. Musically, the score is thoroughly postmodern. Pitts peppers his kaleidoscopic pop-style writing with numerous references to Western art music ranging from Dunstaple, White and Tallis through to Handel and Parry.

This studio remix of a 2011 recording (with biblical verses read by David Suchet) eagerly communicates the commitment of the young performers, underlining the composer’s hope that the oratorio will have wide audience appeal, regardless of listeners’ backgrounds. The challenging but rewarding score could provide a unifying focus for performers of different origins in the midst of very real conflict in the Middle East.

The Song Company establishes a new Christmas tradition with an engaging performance of carols – some new, some old, but all beautifully performed.

The concert from The Song Company, which features a new arrangement of Gavin Bryars' minimalist classic, Jesus' Blood Never Failed Me Yet, is fascinating acoustically and visually.

A delightful look at the life and career of one of Britain’s most beloved actors.

The Song Company delves deep into the Eton Choirbook in vibrant performances with an edge of danger.

Guillaume de Machaut was the finest composer of the 14th century. Antony Pitts, Artistic Director of The Song Company, explores one of his most extraordinary manuscripts.

An enthralling evening of song that found a richer dimension to standard carol fare.

★★★★☆ A three-part polyphonic soothing of the soul for Easter.