Formed in 2019, the Canberra Sinfonia began as a joint venture with the Wesley Music Centre. Headed by Artistic Director and conductor Leonard Weiss, its repertoire focuses on early classical and late Baroque works. But in this concert, titled Apcar’s Holland, the Sinfonia ventured into the musical realm of the 2oth and 21st century with two world premieres and an Australian premiere in a program featuring music by Chinese-American composer Bobby Ge and Australian composers Dulcie Holland and Christopher Gordon. 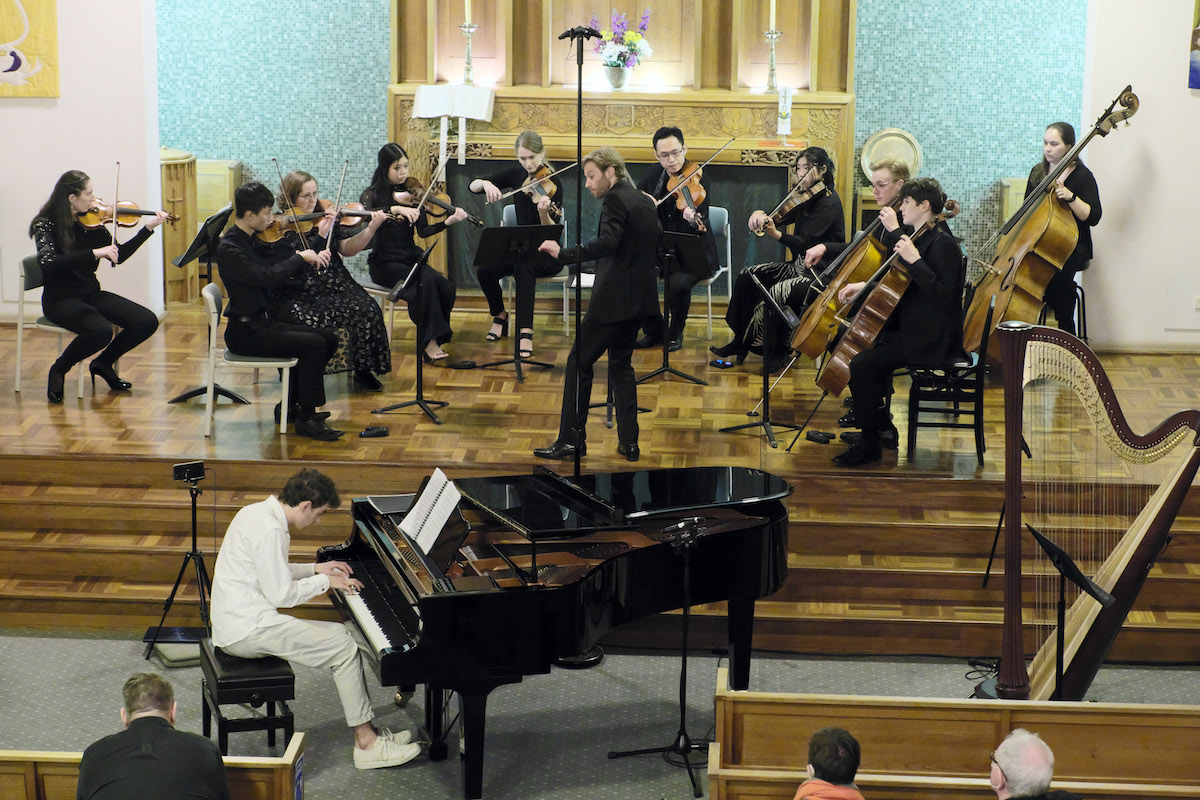 The concert began with Ge’s The Light That Breaks Through for piano and strings, which looks to capture the way sunlight filters through crisscrossing branches. It came to the composer on one of his forest walks. The title is a little at odds with the music, which is full of tension and mystery, but the way the composer has portrayed the essence of sunlight breaking through is an emotional and mighty achievement.

With Ronan Apcar on piano and 10 string players, the piece begins with a few sparse notes on the piano. As the strings enter, it starts to take shape. Its form wanders around a musical centre that phases in and out, as the title suggests. The playing from Apcar and the string players was clear, profound and moving. This mysterious, swelling, tonal composition pushes the limits of emotional music. Cascading runs on the piano merge into one thick fortissimo sound. It breaks through into a light refrain on the piano as harmonics on the strings flutter about, then becomes melancholy, sadder and distinctly sweet. There’s an overall warmth and complexity to this music. It rushes at a listener; it glows.

Apcar is attuned to contemporary music. His expression and ease with new music make him the perfect soloist for this concert. Under Weiss’s direction, the playing was executed with precision.

Christopher Gordon’s music from the 2020 film June Again, is as delightful and sad as the movie it comes from. Weiss was so taken by the score that he asked Gordon to arrange it for the concert stage. This was its concert world premiere.

Performed in two movements – Second Chance and  Catharsis – for piano, strings and harp, this music warms the heart. Its touching style reflects the joy and poignancy that the lead character in the movie, June, experiences in her temporary lucid moments during breaks from dementia.

Gordon’s music won Best Feature Score at the 2021 Australian Academy of Cinema and Television Arts Awards. Its tender style tells a heartfelt story. Thick lush chords under a floating harp melody and a drifting violin, beautifully applied by Concertmaster Brad Tham, as the piano jumps with joy and life, are but some characteristics of this film score. The performance was equally ravishing. This small group created a full warm sound beyond their number.

Dulcie Holland’s Piano Concertino has never been performed. Written in 1983, it is a crime that we have never heard it until now. It’s also a crime that the bulk of Holland’s music has never been published. Written for strings and piano, Holland dedicated this concertino to Selma Epstein, the American concert pianist who championed contemporary music by women and African American composers.

Apcar, who specialises in contemporary compositions, loves the music of Holland. “I just get it. Holland’s style, her harmonic language, it fits what I understand and like about music,” says Apcar, who in 2021 released a Dulcie Holland recording that is free on streaming services.

Holland’s music sounds fresh, alive with a distinctly personal language. It’s searching music with moments of great piano work. It has a full sound, its tonal and harmonic qualities aligned to the music of the 20th century.

Apcar can make most music look effortless. His relaxed style is a tribute to someone so young, and playing unperformed and unknown music with authority, passion and calmness in his body shows a talent far beyond his age.

The slow movement was brought expressively alive when James Monro and Gabriel Frømyhr entered on their cellos as the piano sat underneath. It’s not a sad, slow movement, but one with depth and breadth. It goes on searching but never reaches a place that states its intention. The solo section for piano adds to that probing, mysterious statement.

The rapid third movement brings the dynamic and complexity to a crescendo, with a tumultuous, invigorating combination of growling piano and highly rhythmic strings that jump out at a listener in the final moments.

One wonders why incredible music like this has remained hidden for so long. We need to hear more of it. And Canberra deserves a proper mid-sized music space to perform wonderful Australian compositions like this, but when is that going to happen?

Chamber music with a tale to tell reveals a film composer’s other side.