Australian oboist Celia Craig has now released two albums with her record label, Artaria, named for the ensemble she established in 2013. The South Australian label’s self-titled debut came out in 2018 and is now followed by a sequel – Artaria 2. 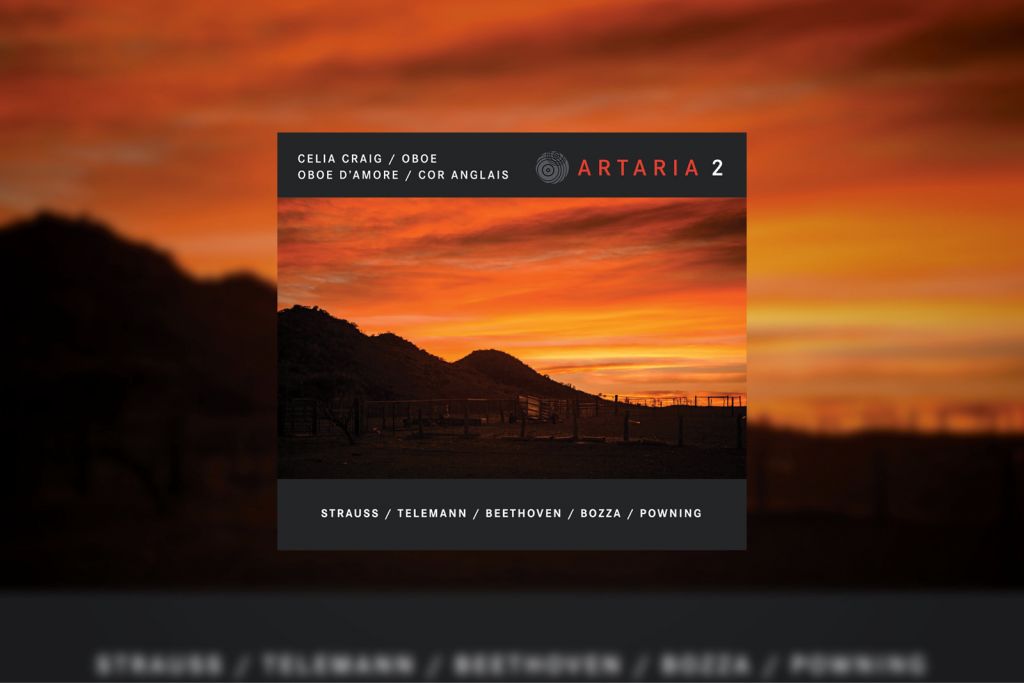 The first release saw Craig joined by members of the Artaria ensemble, violinists Elizabeth Layton and Anne Horton, violist Caroline Henbest and cellist Michael Dahlenberg. It’s a beautiful disc of music by Bax, Vaughan Williams, Finzi and Britten. Craig brings a keen, penetrating sound to Arnold Bax’s Oboe Quintet, the strings rising to meet it with a vibrant, folky grit in the opening movement, while the cavorting finale is a delight. There are some exquisite moments in Gerald Finzi’s Interlude for oboe and strings, while a highlight on the disc is the 18-year-old Benjamin Britten’s Phantasy Quartet of 1932, with its creeping (at times wonderfully lumbering) strings and singing oboe. The album comes to a pleasant close with Ralph Vaughan Williams’ Six Studies in English Folk Song, originally written for cello and piano.

Artaria 2, by contrast, is an all Craig affair, featuring the oboist alone, multi-tracking oboe, oboe d’amore and cor anglais lines, in music by Strauss, Telemann, Beethoven and Bozza. It opens with Richard Strauss’ Suite from Der Rosenkavalier, Craig playing three instruments over four parts, in an arrangement by Bruce Stewart for the South Australian Double Reed Society’s annual ‘showcase’ public concert. The Strauss establishes the distinct sound world that follows across the rest of the album.

From the intensity of the quartet arrangement, the texture mellows in the interweaving lines of Telemann’s Sonata in E Minor, whose two parts Craig plays on oboe d’amore – and there are some beautifully smooth, blossoming entries here, Craig’s sound rich and burnished.

Beethoven’s Opus 87 Grand Trio for two oboes and cor anglais opens with a fanfare of double reeds – a striking combination of instruments for the time. While the trio’s opus number suggests a later work, the piece was written when the composer was young, before he had published his first opus piano trios, in fact. The Classical-leaning Beethoven makes for a neat contrast with 20th-century French composer Eugène Bozza’s Les Bergers De Provence for oboe and cor anglais.

While there is a nice balance between larger and smaller ensembles, the combination of all double reeds, played by the same musician, creates a certain homogeneity of sound – in spite of the character and energy Craig brings to the performances – while multi-tracking inevitably loses some of the organic chamber music ‘feel’ and elasticity of a real ensemble.

That said, the final work on the album, Septboe, by Australian composer (and fellow oboist) Graham Powning, makes a stunning feature of the all-oboe sound. The textures, harmonies and the very shape of this music is crafted with the timbre of the instrument in mind – the opening chords of the Prelude are brassy and refulgent, while the spiky Vivo capitalises on the oboe’s unique attack. Craig soars in the upper reaches of the Lachrymosa, while the final Gigue is bright and chirpy in Craig’s hands.

While Artaria 2 might appeal more to double reed enthusiasts, there’s some great music across both these albums. Well worth a listen.

Stepping into the void after a COVID cancellation, this quartet of Adelaide musicians delivered a very fine performance of 20th-century French chamber works.