It would require enormous will power to resist the temptation to immediately check the 50 plays promised and whether or not your favourite is included. Spoiler alert: it’s not that simple. There are many more plays and players discussed in Julian Meyrick’s outstanding new history of modern Australia than those of the title. 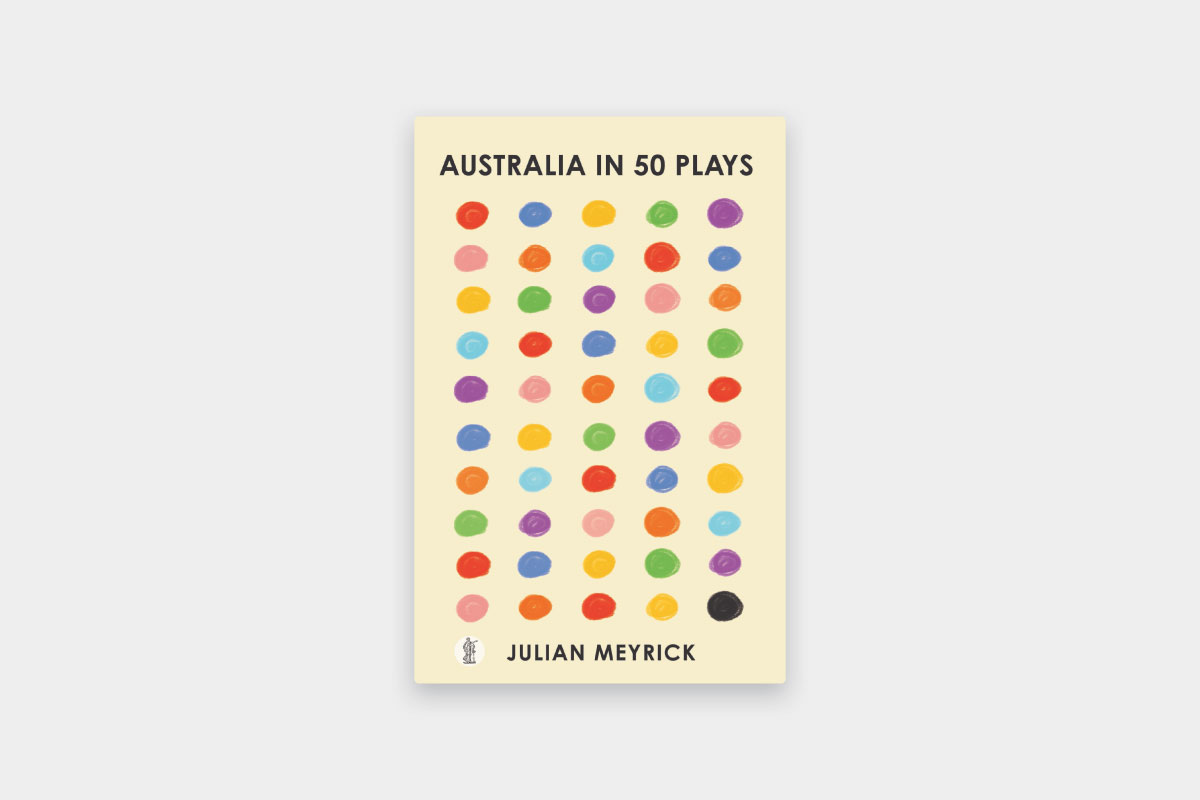 It begins with theatrical entertainment of the 19th and very early 20th centuries, which was largely ad hoc or amateur, or both. Two Australian plays (rare in those days) are neatly juxtaposed to illustrate valuable points that should speak to present day impresarios and writers. Steele Rudd’s On Our Selection and Louis Esson’s The Time Is Not Yet Ripe premiered in 1912. The former is a rollicking piece about a family of selectors, while the latter is a well-crafted satire of the squattocracy. The former was a runaway hit countrywide, touring for years, while the latter was popular with the class it skewered and ran for a few weeks. Nevertheless, as Meyrick notes, “…in pursuing a national drama, box-office success is a misleading hare to chase.”

Then there is “the Firm” – the unique behemoth properly known as J.C. Williamson, a production company that probably set back the development of actual Australian theatre by 50 years. With its importation from overseas of shows good, bad and anywhere in between – largely British and some American – featuring A- to D-list players, the company dominated theatre for much longer than was healthy. As Meyrick remarks, “no bold statements of new artistic purpose are observable, as in Ireland’s Abbey Theatre or France’s Théâtre Libre, no declarations of unique history or language.”

Meyrick pinpoints the emergence of recognisably Australian plays, including a noticeable number of female dramatists, from the end of WW1. It’s also noticeable, he thinks, that when it became apparent there was money to be made, women began to be pushed out until, by the early 1950s, the blokes had pretty much taken over. It was not until the mid-70s that women once again began to get a look in as writers for the stage.

The vicissitudes of Australia’s socio-political climate are mirrored in its drama more than most, Meyrick posits, and which is the chicken and which the egg in his choosing of plays stems from the original long list of 116. His criteria for inclusion were: did they have artistic, cultural or political significance? His final choice can be enjoyed and debated in fascinating groupings. For instance, he sees great significance in the early years of WW2, especially 1942 when four seminal plays were produced: George Landen Dann’s Fountains Beyond, Dymphna Cusack’s Morning Sacrifice, Douglas Stewart’s Ned Kelly and Max Afford’s Lady In Danger.

In a recent interview on RN with Geraldine Doogue, Meyrick said of Lady in Danger that its sophisticated and confident comedy suggested, “…This is a country that knows it’s going to win the war.” It has pretty much been lost to audiences since, as has Fountains Beyond. A quick Google search, for instance, reveals the latter is available at $9.95 a copy, has a cast of seven and runs 90 minutes. The synopsis rings all the bells of 21st-century relevance (Google it, don’t be idle), and the play is ripe for disinterment.

If Fountains Beyond is an unknown known, then Stewart’s Ned Kelly is a known unknown. The bushranger has been written about in novels, for the cinema, for television; has been painted, sculpted, poked and prodded to the point where most people think they know all about him. The play suggests otherwise. Not only is it in verse, but also is a radical and epic one. Surely Patrick White must have read it.

Meyrick sees contemporary Indigenous playwriting as a seminal development. In this case Jack Davis’s No Sugar is highlighted – for good reason. First staged in 1985 but set in the Depression of the 1930s, No Sugar depicts the cruelties inflicted on an Aboriginal family, the Millimurra-Mundays, by petty white officialdom. For (white) audiences of the 80s and 90s it was a horrible shock, not least because of its unexpected humour.

At one point, Meyrick suggests that one reads the plays into the history and the history into the plays. Further shocks and horror, with little respite for laughs, continued in 2002 with Richard Frankland’s Conversations With The Dead. Frankland’s powerful dramatisation of his own experiences as a young man employed by the Royal Commission into Aboriginal Deaths in Custody, to hear the stories of those whose loved ones were the dead is an indelible memory. The more things change, the more they stay the same. As Meyrick observes in this excellent book: “Reading the repertoire is a matter of comprehending ourselves as much as the play in front of us, managing our own partiality as well as the exclusions and occlusions of the past.”

Julian Meyrick explores the relationship between our national drama and our national life in his new book, and wishes more politicians, political economists and political journalists went to the theatre.

Reading our dramatic past

In his new book, Australia in 50 Plays, Julian Meyrick looks at how our national drama has shaped and mirrored Australia's history since Federation. We run an extract.

What Matters? A book about value in Australian culture

Three Flinders University scholars have written a new book about the “metric madness” surrounding the way we value Australian culture. We publish an extract.

In a new Platform Paper, the actor discusses the survival skills that have helped him sustain a 50-year career. Continue reading Get unlimited digital access from $4 per month Subscribe Already a subscriber? Log in