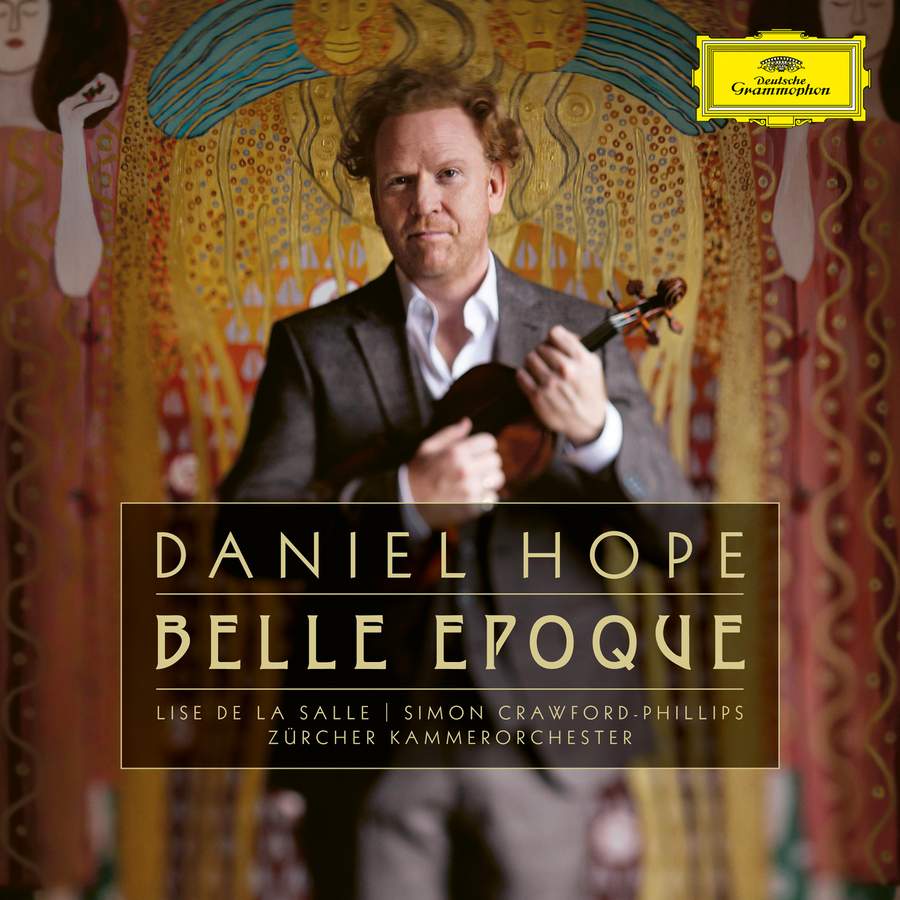 In his first volume of autobiography, My Young Years, Arthur Rubinstein discusses the gilded salons of pre-WWI Paris, and how, during performances at these glamorous affairs (usually before a grand dinner),  the 100 or so members of beau monde present would often applaud or ‘bravo’ at the end of a particular passage they liked, whether there was a pause in the music or not.

It’s that world of sophisticated elegance which the term “Belle Époque” might suggest to you, but it’s not necessarily the world Daniel Hope is trying to evoke in this ambitious release. As he says of this period in the insert notes: “There was much division, hatred and jealousy… political tensions, discontent among the working classes and imperialism. And yet with hindsight we tend to look at it and say ‘isn’t that beautiful?’”

And many pieces on this ambitious release are beautiful. There is exceptional music and playing to enjoy here (the posthumously published sonata by Ravel is a highlight), but

I wish I found the overall result more involving. It is wonderful to hear so many rarely-played works, but in many cases it’s not clear why they’re here.

Apparently the second disc, devoted to chamber music, is sequenced in roughly chronological order, but the insert notes are so skimpy it’s hard to know how some of the music links back to Hope’s central idea. When did Arnold Schoenberg write his jaunty little Piece in D Minor? Why do we only hear the first movement of Zemlinsky’s A Major serenade? What is the story with French composer Koechlin’s glorious little pieces for violin, horn and piano, which are apparently written to be played out of sequence? (He did have a wicked sense of humour, but more information would be helpful).

I’m also puzzled by the decision to orchestrate the major work in the set, Chausson’s Concert for Violin, Piano and String Quartet. This is a unique, richly textured work with a melancholy beauty enhanced by its unusual instrumentation. In its original version it’s a powerful emotional narrative played out in an intimate setting, which it cannot be in this performance, in which the string quartet parts are allocated to the 20 musicians of the Zurich Chamber Orchestra. This is not a criticism of the performance; I simply question why a release celebrating the spirit of the Belle Époque would change the sound of one of the era’s most substantial chamber works so profoundly.

Any good new recording of The Four Seasons should always be welcomed. This one by Daniel Hope and the Zurich Chamber Orchestra is more than good: it’s outstanding. Listening to these dramatic, historically-informed performances, one is immediately struck by how Vivaldi’s prefatory sonnets and musical sound-painting can become not mere evocations of natural phenomena but starting points for deliberate, and far more exciting, abstractions which find their loci in pure emotion. Especially to be welcomed is Hope’s fluent, abundant decoration of the melodic line, particularly in the slower movements, which is echoed by the marvellously imaginative continuo section’s own elaborations. Offering a bracing new take on a classic is one thing; providing a new context for it is something else. And that something else may well be what ultimately attracts you. There have been myriad responses from various composers to Vivaldi’s original, such as Kalman Cseki’s Alpha, Apocalypse and Armageddon and Oliver Davis’ settings of Vivaldi’s sonnets, Anno and Anno Epilogue. Here we have something different: a pre-existing or newly-composed work assigned to each month of the year, with accompanying artwork – paintings or drawings – that is beautifully reproduced in the recording’s booklet along with copious notes by Hope….

Very much a Renaissance man, the violinist talks about life, thinking outside the box and his hopes and fears for all of our futures.

If the violin is the tempestuous, attention-hogging soprano of the string world, the viola is the mezzo – gently melancholic, often found lurking in the shadows just beyond the violin’s spotlight. With this album, Lawrence Power asks a question: what would happen if the viola took centre-stage, stepping forward not just for high-minded sonatas and concertos but for precisely the kind of bravura concert pieces so beloved by violinists?   The answer may not offer the most satisfying recital programme, but it does shed light on some little-known and still-less-often performed repertoire, giving the character-actor of the string family a bold new starring role in the process. Glance down the repertoire list for Fin de Siècle and you get a thrillingly wide-angle view on a period of French music too often distilled down to just Debussy and Ravel, with maybe a smattering of Chausson if you’re lucky. Henri Büsser, Georges Hüe, Léon Honnoré, Lucien Durosoir – the names are as fragrant as their music, whether it’s Büsser’s episodic Appassionato – an ear-seizing opener that packs both high-wire angst and reflective ennui into its barely five-minute span – Hüe’s moody sonata-in-miniature Thème Varié, with its wistful theme and highly characterised sequence…

Daniel Hope is one of those musicians who can convince in just about any repertoire; he’s recorded unusual concertos like the Berg and Britten, and performed Max Richter’s reimagining of Vivaldi’s Four Seasons. Here, he turns to that unfairly maligned genre, film music. Hope was inspired by the way that many of the early twentieth-century European composers persecuted by the Nazis escaped to America, and arrived in Hollywood. As a result, the ‘Hollywood sound’ of early films (think of the dramatic, sweeping scores of the silent film era) can be traced directly back to the late Romantics – the style of Rózsa or Korngold is not so different from that of Strauss, or Schoenberg’s early works. There’s quite a cross-section of composers here. In crafting the program, Hope’s starting point was Korngold’s Violin Concerto, though there are tracks from later film composers like Williams and Morricone included as well. The Korngold concerto is given a stirring performance, but it is, disappointingly, the only solid chunk of music on the CD. The other tracks are fairly short, and so I’m not sure that it’d be comfortable to listen to the entire CD in one sitting – the tracks have a tendency…