Queensland Theatre has welcomed audiences back to its home at the Bille Brown Theatre for Bernhardt/Hamlet, a portrait of 19th-century French stage actress Sarah Bernhardt by American playwright Theresa Rebeck. Initially scheduled as the fourth play in the eight-play season, this is the second to open in 2022 following the Omicron wave and devastating Brisbane floods in February, which necessitated extensive repairs to the theatre. 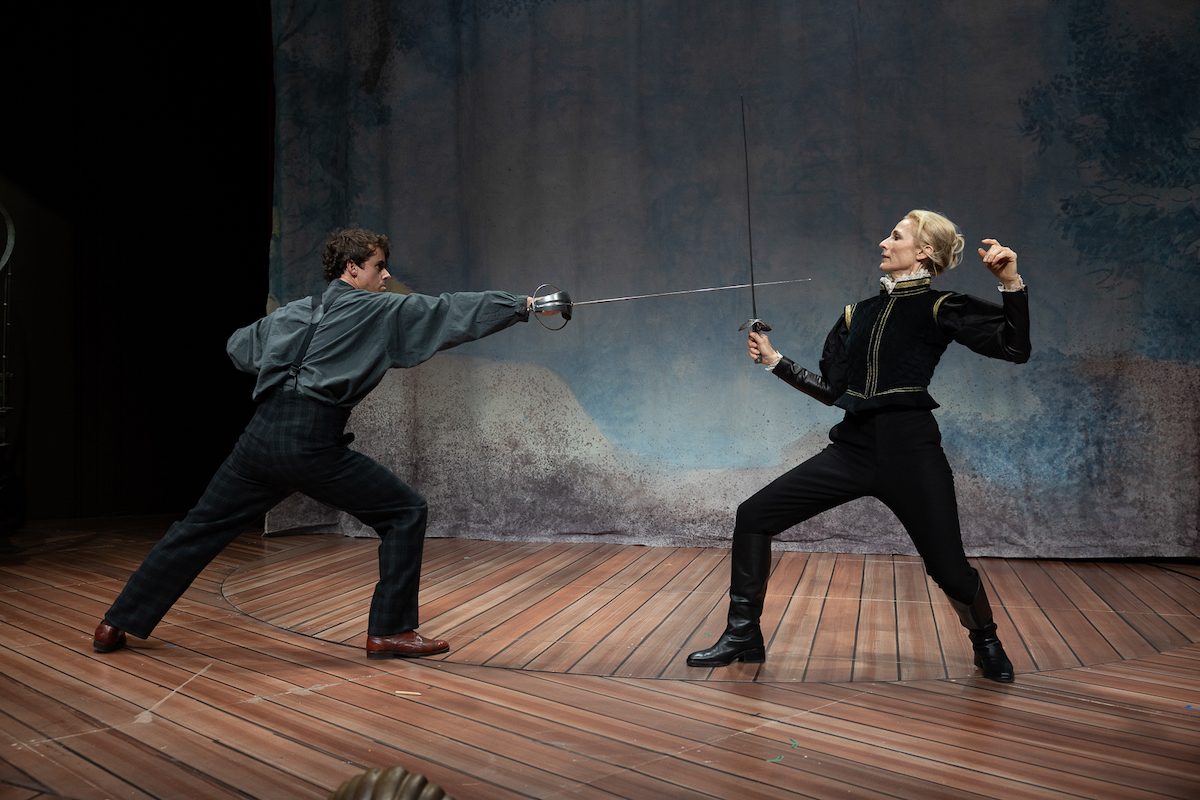 Directed by Lee Lewis, Bernhardt/Hamlet celebrated an audacious undertaking by one of theatre’s pioneering women. In 1899, Sarah Bernhardt was down on her luck; she had built a new theatre, but her last production lost her millions of francs, and she needed to sell a lot of tickets to escape from debt. Bored by the stale and empty roles reserved for women of her age, she set her sights on one of the greatest challenges for an actor, and a role unheard of for a woman – Hamlet, Prince of Denmark.

This was not Bernhardt’s first “breeches part”, but her intention to play the sacred role of Hamlet caused a scandal in Paris. Bernhardt’s friends discussed the production amongst themselves, supportive but suspicious, and through these characters the audience also heard the rumours and concerns about Bernhardt’s behaviour from wider Parisian society. Secondary to the story of Bernhardt’s quest to play Hamlet was the ebb and flow of her love affair with Edmond Rostand, and his challenge to rewrite Hamlet for her – without the poetry – while working on his own play, which would become Cyrano de Bergerac.

In addition to telling the story of Sarah Bernhardt herself, Bernhardt/Hamlet used her as a vehicle to discuss one of Shakespeare’s most influential plays and protagonists, as well as theatre-making and misogyny more broadly. How old was Hamlet? What is a performance if not an act of translation or transformation? What is the nature of a woman, or a man, or a soul? The play also touched on the age-old dichotomy of money and art, as well as the limited roles available to actresses once they were deemed too old to play the ingénue, an issue which persists into the modern era.

Angie Milliken was luminous as Sarah Bernhardt, with a commanding stage presence, lithe strength, and graceful expressiveness. Both Rebeck’s script and Milliken’s portrayal showed a complex Bernhardt – her ego and self-assuredness were unparalleled, but she struggled with self-doubt, loneliness while her lover was absent, and frustration at the social expectations placed on her as a woman even as she disregarded them.

Hugh Parker gave an outstanding performance as Bernhardt’s collaborator and friend, actor Constant Coquelin, and his recitations as both Hamlet and the ghost of his father were resonant. Coquelin was presented in the play as one of the only men who treated Bernhardt as a true artistic equal, without also romanticising or objectifying her as a muse. Showing Bernhardt and her players rehearsing, the play incorporated sections of Hamlet; Parker and Milliken’s performance of Act 1 Scene 4, in which Hamlet meets the ghost of his murdered father, was particularly memorable. 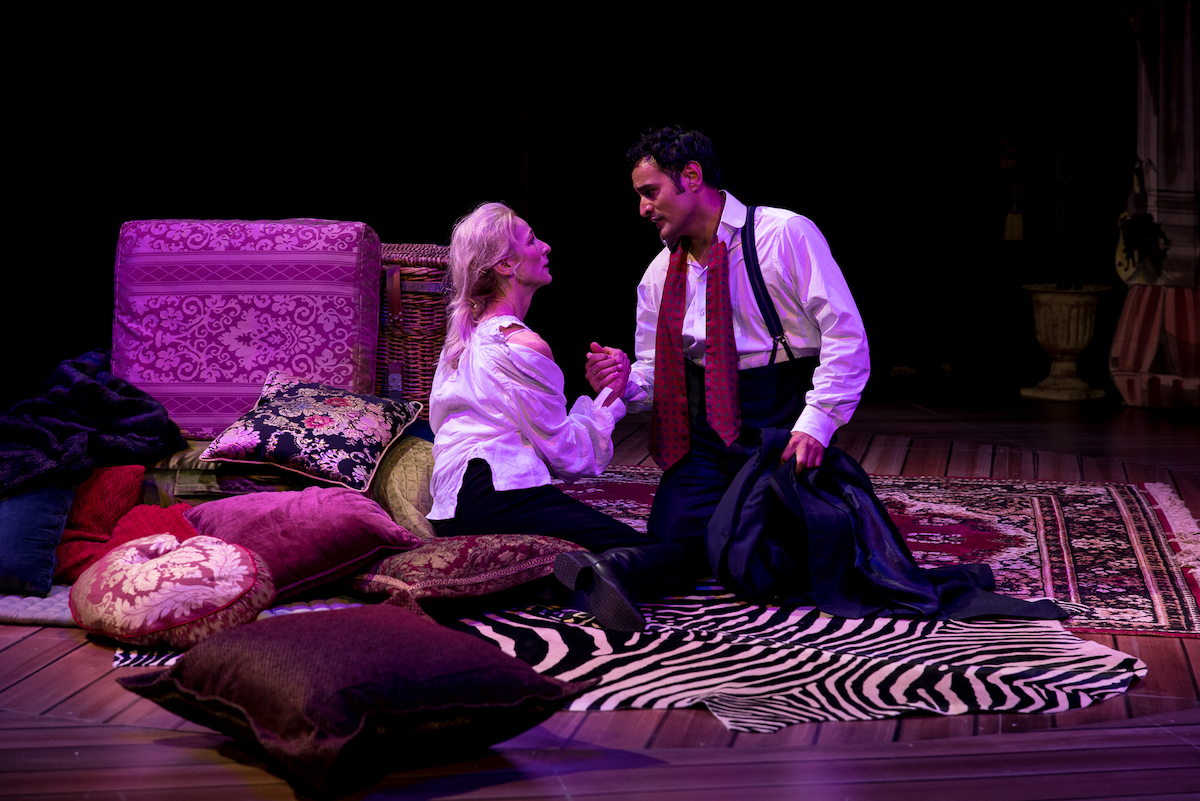 Nicholas Brown delivered an emotionally engaging performance as Bernhardt’s married young lover, poet and playwright Edmond Rostand, although the escalation of his anger occasionally felt disproportionate. Amy Ingram, Gareth Davies and Leon Cain made up Bernhardt’s troupe of players, a comedic trio that occasionally threatened to steal the show. In addition to their excellent timing and physical comedy, Bernhardt’s artistic ambition was made even more stark against the melodrama and absurdity of these characters.

David Valencia played artist Alphonse Mucha with flair, and Anthony Gooley was cynical and flamboyant as Bernhardt’s friend and critic Louis. Julian Curtis appeared in the second half of the play as Bernhardt’s son Maurice, although his characterisation felt very modern compared to the other characters. Wendy Mocke took on the role of Rosamond for only a single scene, but the tension that she built with Milliken in that brief time was admirable.

Lighting design by David Walters – who, with Bernhardt/Hamlet, celebrates his 100th show for Queensland Theatre – influenced the atmosphere and emotion of each scene, and the dramatic spotlight of Bernhardt’s entries and exits emphasised her status as the centre of attention and conversation. The final moments of the play were forgivably sentimental, incorporating footage of the real Sarah Bernhardt fencing in 1900 as Milliken and Curtis crossed rapiers onstage.

Composition and music supervision by Max Lambert, with sound design by Brady Watkins, also contributed to the mood onstage, particularly in scene transitions. Interesting objects such as a thunder sheet were included, although the music used in the brief scene from Cyrano de Bergerac felt inexplicably modern.

Set and costume design by Simone Romaniuk was impressive, building upon the meta elements of the play to create a set within the set. The costuming was richly textured and multi-layered, from Hamlet’s black doublet to Cyrano’s ruff and Bernhardt’s sweeping brocade gown. An extensive array of props and set pieces were also used, rotated through the scenes on a revolving stage, and replicas of Mucha’s stylised posters featuring Bernhardt were also featured.

Bernhardt/Hamlet was filled with drama, comedy and excess, plays within plays and stories within stories that all revolved around the blazing ambition and influence of the singular Sarah Bernhardt.

Bernhardt/Hamlet plays at the Bille Brown Theatre, Brisbane until 18 June.

State Opera South Australia delivers yet another successful revival as part of its Lost Operas of Oz program.