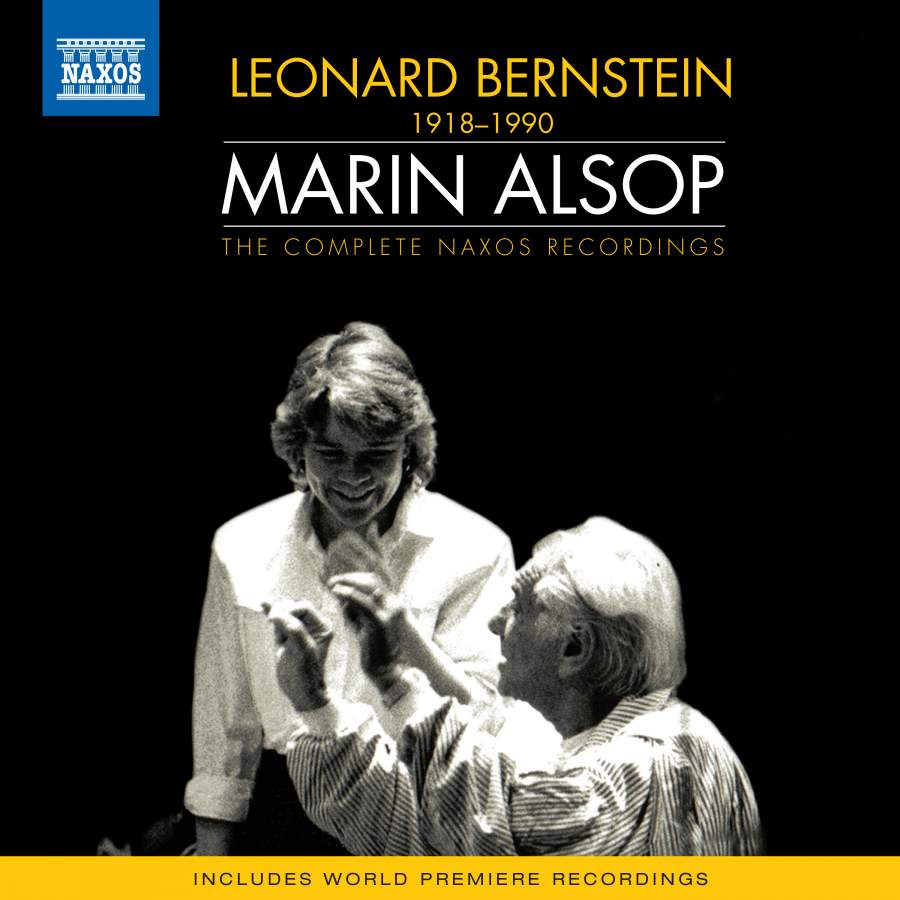 Leonard Bernstein was born in 1918, so celebratory releases of his music are appearing this year. Among the best (comparable with his own versions and even better in one case) are the Naxos recordings by Marin Alsop, conducting the Bournemouth, São Paulo and Baltimore Symphony Orchestras. Compiling material that is already available, this eight-disc set also contains several new recordings. Almost all the major works are included, plus rarities like the Missa Brevis (1988).

When Alsop was a student at Tanglewood, Bernstein mentored her. Anyone who heard her conduct the Sydney and Melbourne Symphony Orchestras in the suite from On the Waterfront knows her innate feeling for Bernstein’s idiom (Stravinsky meets Copland and Mahler in a post-war jazz cellar).

First-rate soloists include the French violinist Philippe Quint in the Serenade for Solo Violin, Strings, Harp and Percussion (possibly the composer’s concert masterpiece; undoubtedly his most formally satisfying work), and pianist Jean-Yves Thibaudet in The Age of Anxiety. Alsop’s recording of the First and Second Symphonies is a recent one (2016), and the sound is exceptional. Thibaudet marries a bright touch with a feel for jazz (he once recorded a disc of Bill Evans’ music). He is the most dynamic pianist to tackle this piano concerto/symphony since Lukas Foss on Bernstein’s 1950 mono recording (currently reissued in a Sony collection).

Alsop proves a reliable guide to the dance scores Fancy Free and the more challenging Facsimile. The unattractive ballet score Dybbuk is the only major work missing.

Her triumph is the problematic Mass of 1970. Keeping the large forces on a tight rein, she uses strong Broadway singers as soloists and boasts the finest celebrant on record in Jubilant Sykes, an operatic baritone who slips easily into gospel and rock. Alan Titus in Bernstein’s recording sounds uncomfortable by comparison. Alsop’s Chichester Psalms also rates among the best. Thomas Kelly, the child soloist, displays excellent control. His only equal is Aled Jones on a long-gone RPO disc.

The set includes a DVD documentary, Bernstein, Larger Than Life, featuring interviews with Stephen Sondheim, Gustavo Dudamel and others. The recording premieres are of secondary occasional works: orchestrations of the Anniversaries – originally short piano pieces dedicated to friends – and A Birthday Bouquet (1988), where eight composers each wrote a variation on a Bernstein theme to mark his 70th birthday. The roster includes Berio, Corigliano, Takemitsu and John Williams.
It’s fun, if perhaps not essential.

The best Bernstein since Lenny himself, and arguably even better.

Review: On the Town (WASO/Benjamin Northey)

Northey is a winner with his West Australian Side Story.

London outfit plays it straight in a celebration of New York.

Though still relevant, Lenny’s Mass misses its mark in the city of love.

The best of all possible Bernstein tributes.

Carolyn Watson on the state of play for women conductors

As she prepares for Dallas Opera's Institute for Women Conductors, the Aussie maestro discusses gender equality on the podium.

Bernstein recorded his Jeremiah Symphony twice (with Jennie Tourel and Christa Ludwig) and his Age of Anxiety four times (once with Philippe Entremont, twice with Lukas Foss and a filmed performance with Krystian Zimerman) and you might be forgiven for assuming that the best anybody else could likely offer is Lenny-lite; re-interpretations of Bernstein’s own interpretations overriding the necessity to take a fresh look at his scores. And that is largely what the likes of Leonard Slatkin and Andrew Litton have offered. The presence of Bernstein feels just too big to ignore and their recordings pay dewy-eyed homage to their hero, gone but never forgotten. Marin Alsop belongs to that same generation of American conductors and, like Slatkin and Litton, she beat the inevitable path to Bernstein’s door and has since chosen to embrace the legacy of being a ‘Bernstein pupil’: when interviewers have finished with those inevitable questions about her gender, Bernstein is invariably next on their list. But then you hear Alsop’s approach to the Jeremiah and Age of Anxiety symphonies and can only marvel at how far she moves the music, and the debate surrounding it, forward. This is Bernstein for our times. The Jeremiah Symphony was…

portrait of North America’s vibrant and diverse classical music culture, with works for cello, with and without piano, performed by brothers Paul and Huw Watkins. Both eminent musicians, Paul has played with the Emerson Quartet and manages a career as a conductor, while Huw is also a notable composer. Both bring technical refinement and a keen musical touch to their performances. Both Samuel Barber and Leonard Bernstein’s works are appealing, thanks to an attractive lyricism in the former’s case, and jazzy, eclectic beats and rhythms in that of the latter. Paul’s playing is full of passion, but also nuanced in capturing the lighter shades of both works. Elliott Carter’s Sonata for Cello and Piano was an important work for the composer, marking a crucial change away from a lyrical neoclassicism, to melodic angularity and radical rhythmic and metric invention. The pair’s performance here is as fresh and articulate as the work.  George Crumb’s Sonata for Solo Cello is an invigorating experience. The work is a masterpiece – expertly paced, passionate, with beautiful harmonic language and an authentic approach to virtuosity. It is the best demonstration of Paul’s expert musicality.  Finishing with music from Aaron Copland’s old-school American classic Billy the…