We’ve seen openings delayed, deferred and cancelled courtesy of COVID, but going early is understandably a new one. No one wants to lose a day leading into a premiere, but when audience capacity was cut to 75 percent Queensland Ballet – as it has throughout the pandemic – made the bold call to welcome not only audiences but also the critics 24 hours ahead of schedule.

Of course, they wouldn’t have done it if they didn’t believe they could pull it off, and they have. Bespoke highlights the depth available to the company in both its current and developing ranks, incorporating its Jette Parker Young Artists and Pre-Professional Program students. 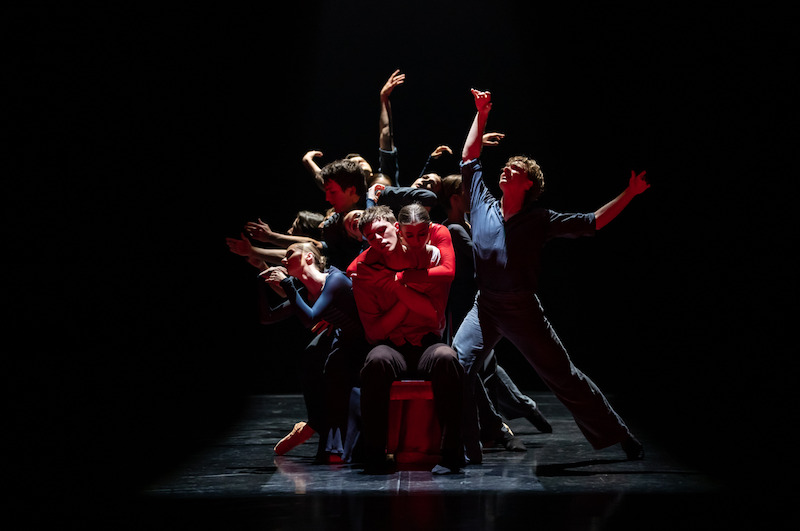 The fourth year of the annual contemporary season features four esteemed choreographers who have chosen to be Brisbane-based and also part of the QB fold. The best-known and most experienced of these are Natalie Weir – appointed Resident Choreographer in 2020 – and former Principal Paul Boyd, who fulfils that role for Queensland Ballet Academy, where he also heads the upper levels program. Prior to joining QB, Ballet Mistress and Creative Associate Rani Luther’s illustrious performance career with Netherlands Dance Theatre, The Australian Ballet and Sydney Dance Company led to choreographic commissions for them, while Associate Choreographer Jack Lister has expanded his repertoire as a dancer and creator through joining Australasian Dance Collective (ADC) in 2020.

It’s been three years since we’ve seen a work by the multi-award winning Weir, who ended her term as Artistic Director of Expressions Dance Company (now ADC) in 2018 and had last year’s QB commission rescheduled until now. Inspired by Wilhelm Müller’s poems (comprising the text of Schubert’s Winterreise), the 24-minute Fallen is classic Weir, melding introspective gravitas with inventive, exhilarating athleticism to create poignant imagery. From her earliest works as a teenager, Weir’s choreographic voice has been clear; that ability to communicate ideas and themes has been a strength throughout her three decade-plus career.

Her collaborative generosity has ensured the Jette Parker Young Artists look like fully-fledged company members. Cameron Goerg’s lighting design effectively delineates the confined monochromatic space of a man’s solitary existence, which expands at various times to include his emotional shadow life and a lost love, radiant in a red gown. The angst can be palpable – his face behind prison bars conjured by vertical chair slats, and the ebbing touch of his recalled former love. 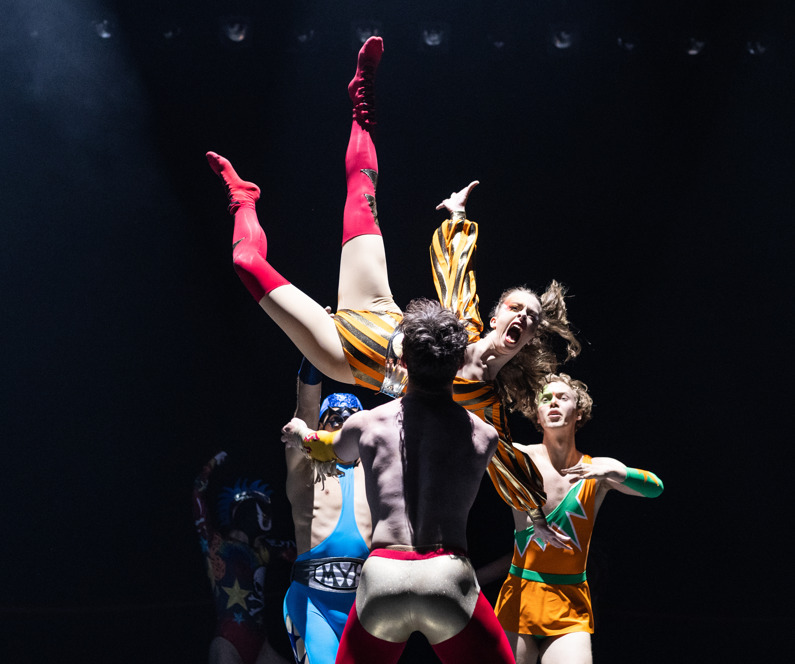 Also dynamically engaging and successful in a vastly contrasting fashion is Lister’s Mind Your Head, an opportunity for seven of the company to get outrageous – almost unrecognisably so. That’s mostly due to the retro superhero-esque costume creations of the talented Zoe Griffiths (who recently crafted Naomi Price’s lavish Skyfall frou-frou tulle frock) for the work’s pro wrestling characters, who strut a three-sided roped ring.

Kapow! Thwhack! Splat! Who would’ve thought cartoonish wrestling antics had so much in common with classical dance? But in extremes of lines and launching lifts, alongside feigned effortlessness of entertaining excess, Lister carves out a nexus. Goerg’s lighting employing blackouts and spotlights in conjunction with the musical choices accentuate the circus mood and contrast between frenetic and slo-mo sections.

Mind Your Head is out-there, original, over-the-top and damn good fun. Clearly it was just as much so for the cast, who amped their personae to the max and took them into their bows. It was a flying 15 minutes, even if the start of Round 2 felt a little repetitive. Kudos to Georgia Swan, Vanessa Morelli, Renee Freeman, Alyssa Kelty, Rian Thompson, Samuel Packer and D’Arcy Brazier for going big!

Bespoke’s bookending works both present multiple movements – seven in the opening, Boyd’s Caravanserai, and four in Luther’s From. To. Here. While Boyd’s are named, some are easier to identify than others; the unifying factor is the commitment and focus of the Pre-Professional students to capture the mystique of the Silk Road and its spices and perfumes evoked by the musical journey. Boyd has crafted a vibrant showcase that highlights a range of performance attributes, from technical to expressive, incorporating percussive accents and Middle-Eastern-themed gestures. Its 24-minute length, followed by Fallen, means we see more of the junior artists over the program than the senior company’s, and while they are exemplary, I feel audiences would prefer the balance to be reversed, and by a greater proportion. 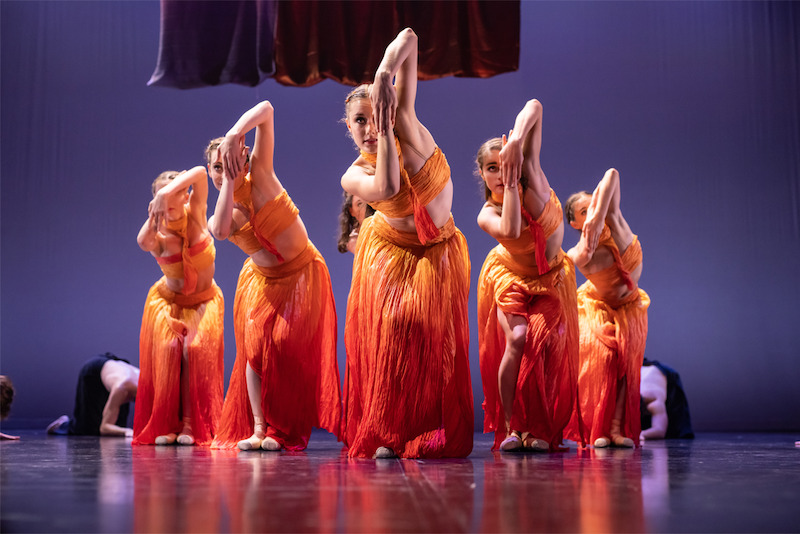 From. To. Here reflects on immigrants’ journeys, set to a 22-minute original score by composer Robert Davidson (Stalin’s Piano). The depiction of despair, hope, belonging and peace felt somewhat indistinct as movements; rather, for me, all of those emotions registered strongly at different times throughout the piece, in solos and group work. The choreography’s physicality exhibits a pleasing balance of light and shade, from open extensions and lifts, dynamic kicks and jumps, to more pedestrian movement redolently capturing fatigue and anguish. There’s a powerful intensity generated by the 17 artists en masse on the Gardens Theatre stage.

Although the previously used Powerhouse Theatre is an edgier environment for this kind of season, the Gardens Theatre remains an intimate setting for dance that we’re fortunate to still have after its demolition had been mooted.

A tender portrait of the extraordinary triumphs and emotion of an ordinary life.

When Time Stops is choreographer Natalie Weir’s exploration of the final moments of a woman’s life. Iain Grandage revisits his score in this explosive recording from the Camerata of St John’s. The composer tells us the piece is “not only about death. It is also intrinsically about life and the moments within it where one’s normal sense of the moment is stretched”. Immediately obvious is the strength of the music without visual support from the accompanying dance narrative. Rowing 1 begins with blood-curdling strings before Katherine Philp halts us with a cello melody. The second track, Street 1, is a violent commotion of textured strings. The relationship between tracks means the album should be approached in one sitting. Higher tones and heightened emotional intensity inform Rowing 2, and First Kiss brings a euphoric wave of strings. Also of note is Orb, with Chloe Ann Williamson’s double bass pulsing under impassioned and fiery melodies from violist Elizabeth Lawrence. The resolution leaves us hanging on for more. Violinist Brendan Joyce stands out in the grating and trance-like repetition of Scan, while Into the Wall is thick and rhythmic. Impeccable intonation is heard in all movements, though particularly noticeable in Rowing 3, which…