Theatre stages are filled with precipice-like moments. Black Brass at Belvoir presents us with a singular precipice that is rarely seen on stages but happens to Australians every day.

For refugees and immigrants there are seemingly an eternity of moments between arriving in Australia and the brassy citizenship ceremony. As part of a bureaucratic rite-of-passage men, women and children must take part in ritual meetings with immigration to prove their value, or in this case their love, so that a ‘new life’ can truly become theirs. Black Brass explores the grief, reckoning and loss experienced by an immigrant as they deal with an old life that is often emotionally bigger and more all-encompassing than the simple life they hope to have.

Black Brass, directed by Matt Edgerton (Barking Gecko Theatre’s Fully Sikh, A Ghost in my Suitcase), is inspired by interviews with people from Perth’s Zimbabwean, Sudanese, South African, Central Congo, Mauritius, Nigerian, Congolese and Kenyan communities. Written by Kenyan-born writer and performer Mararo Wangai (The Last Great Hunt’s The Advisors, Black Swan State Theatre Company’s The Tempest), these stories have been extracted for their essence and woven into a narrative delivered through monologues sown together with music composed by Mahamudo Selimane. 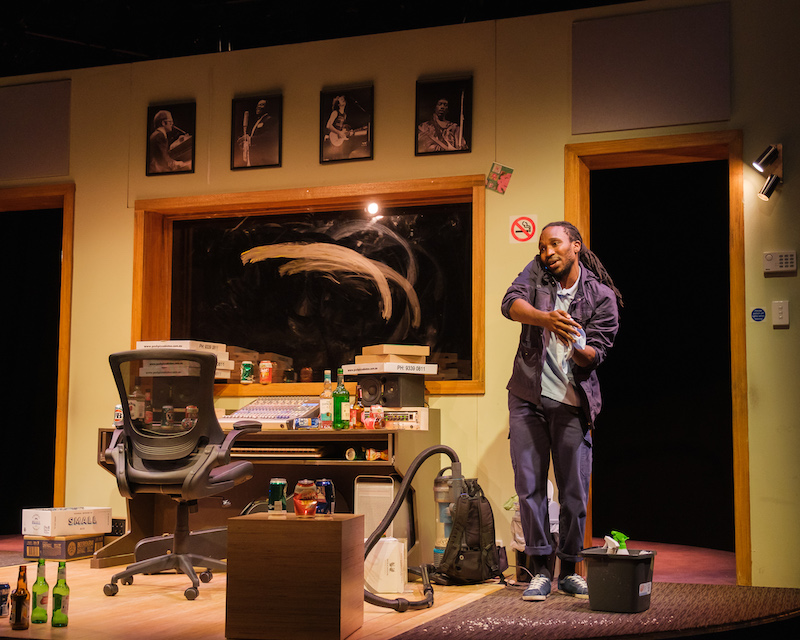 The simple narrative is that of a young man in present day Australia. When the lights come up, we see him dressed as a cleaner in a music studio, which is the scene of a post-party disaster. There are empty beer bottles, cans and liquor bottles intermingled with towers of pizza boxes and papers. Told through a one-sided phone call, the young man has just had a fight with his girlfriend Sophie, who has locked him out of their apartment. She found out that he’s sending money home to Africa. She wants to know why. For the young man, home is a world and a lifetime away; he doesn’t know how to start to explain.

The music begins with the needle falling on a record player and the sultry sounds of a slow jazz track interrupting the harshness of his reality. The first long, slow notes open the door to a kind of magical realism. There is suddenly an older African male musician inside the booth in the studio. We are not sure where he has come from, but the sounds and songs that he plays lead the audience and the young protagonist through a series of memories and moments that begin to expose the life story of this cleaner, before coming to Australia.

This composer-musician, Mahamudo Selimane, is tasked with bringing the music to life throughout the production. Selimane is a powerful presence on the Belvoir stage, his character representing a phantasm or a visiting of the ancestors upon the young cleaner. With only the raise of an eyebrow or shake of his head, his comedic spirit brings a much-needed lightness and compassion to the obvious distress of the young man. Selimane’s musical prowess truly caries this piece, moving through songs and rhythms drawn from a myriad African countries, singing in Shangana, Swahili, Kikuyu, Xhosa and English. The sound design by Tim Collins should be mentioned here as it was so clean and well-balanced that it never drew attention to itself despite the shift between instruments and audio devices.

As a complete work Black Brass is unbalanced. Edited by Sisonke Msimang and Zainab Syed, the piece could have endured greater rigour during the writing process. Foundational narratives are insufficient to support the lofty emotional highs that the piece aims for, and there are not enough telling details about ‘home’ and the people there through the long earnest monologues of the central character to make the the audience care. Instead, the protagonist waxes lyrical, quite often consumed with poetic language that though beautiful, doesn’t give the audience what it needs to emotionally connect. Consequentially parts of the piece drag due to wordy monologues that fail to move the narrative forward with the craft the story deserves.

One of the frustrations of telling these stories that are quite often footed in real life trauma is that the writing team are burdened with the added labour of having to communicate with a majority audience which is not privy to the ethnic or cultural environment in which these stories originate. So, whilst the suggestion would not be to condescend to the audience, as that would erase the sizeable African Australian contingent that loves seeing familiar stories on Australian stages, it would be a good idea to take the small pains of world building to familiarise those of us who can only build a picture from our own lives peppered with what the performance tells us. 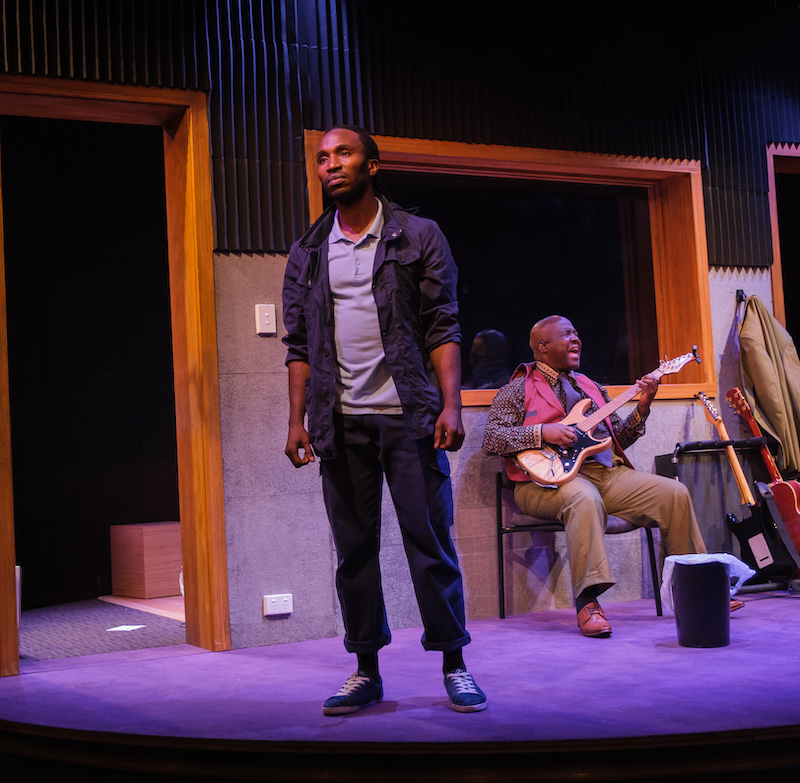 For the staging at Belvoir St, Zoë Atkinson has designed a simple set built into the Upstairs Theatre that is comprised of the two rooms of a small music studio – the engineer’s station and the booth. Both are mounted on a revolving platform that rotates throughout the production. The revolve was drastically overused throughout the piece and was so distracting that it took me right out of the space of the story and into the physical space of the theatre. In speaking with the writer and performer Wangai after the show, he expressed how much he loved that the stage was moving and living with them. I have to say as an audience member I was annoyed by the excessive use and felt there are better ways to bring life and pace to the stage.

Black Brass was still a joy to behold. It is an example of an intentionally holistic cultural practice that embodies community engagement from the beginning of the project in Perth, as part of the Perth Festival 2021, to its current manifestation as Belvoir’s first production for 2022. This is apparent from the time you enter the theatre; the entrance hall has been dressed with photos by local Ghanian-born photographer Richmond Kobla Dido, and the welcoming foyer is also decorated with the intention of enveloping audiences in the world of the stories presented on stage.

Belvoir Producer and Creative Producer for Black Brass, Zainab Syed said, “When we made Black Brass, we wanted to make sure audiences were invited to celebrate the breadth and depth of African cultures. From Ethiopian coffee, jazz music, old proverbs and textiles in the foyer, to 60 minutes of a deeply moving play that oscillates between music and monologue, Black Brass honours the stories of those who journey here – what they leave behind, and what they carry with them.”

The universal message that Black Brass imparts is that no one is only what you see. And in a time when so many of our fellow Australians are from the African continent, telling stories such as this is timely in bringing home not only the trauma of hard times, but the joy of owning and sharing our whole stories complete with the living soundtrack that carries them.