As the gallery of residence of the once-controversial painting Blue Poles by the American artist Jackson Pollock, it was only fitting that a new string quartet inspired by the painting be performed in the National Gallery of Australia.

Prior to the performances we were shown a short documentary film on Jackson Pollock, which looked at Blue Poles and how it has changed Australia.

The concert then began with Poles II, composed and performed by Matthew Doyle on his didgeridoo. This work had Doyle making a rapid rhythmic tapping on his instrument as he played continuously for many minutes, in an amazing feat of circular breathing.

Next came an ethereal work by the American composer Ruth Crawford Seeger (1901-1953). Seeger was described as revolutionary and ultramodern, and she also worked with Béla Bartók. Her Andante for Strings is an arrangement of the third movement from her String Quartet, entitled 1931. 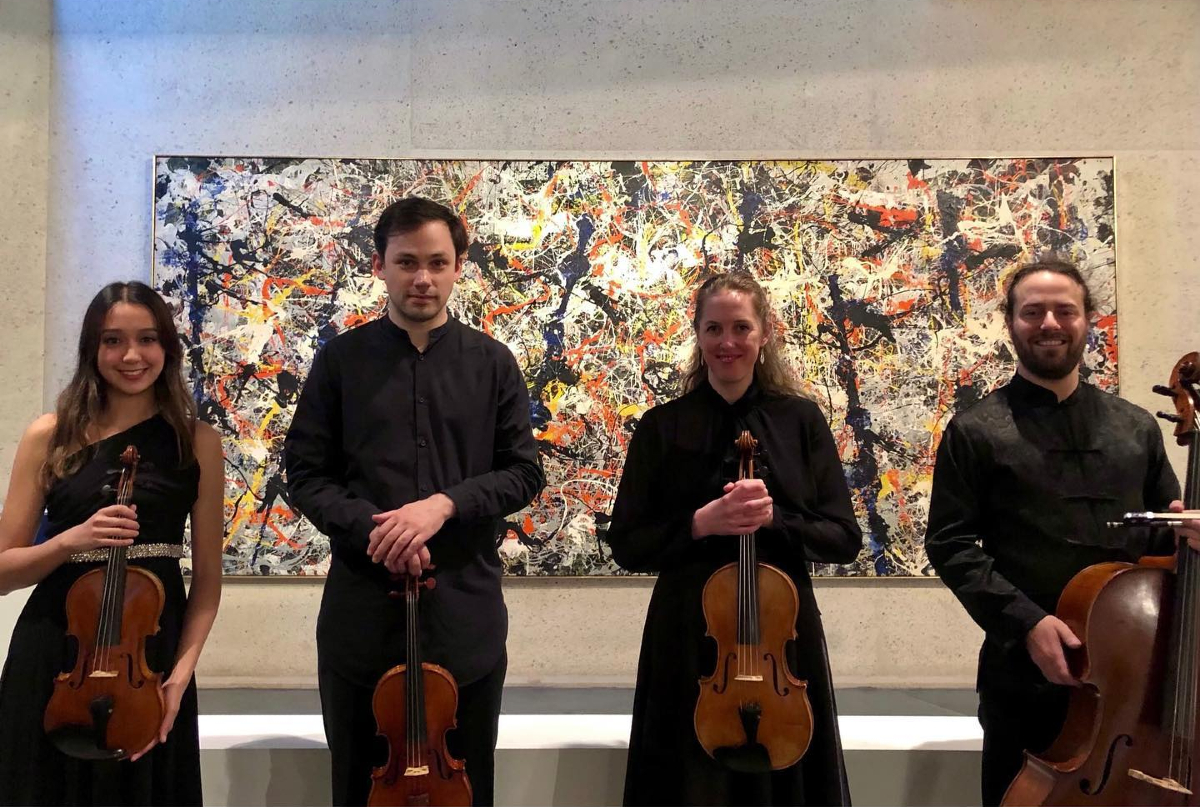 The Alma Moodie Quartet with Jackson Pollock’s Blue Poles after their concert at the Canberra International Music Festival, 8 May, 2022. Source: Facebook.

Seeger described her slow movement as “a heterophony of dynamics”. The cello and viola began, only just slightly breathing sound that quickly grew thicker. That set up the dense intensity of this work. The violins entered similarly, creating an escalating air of sound. A piece of almost sweet music emanated for a moment, and then a clash of strong dynamics before it slowly faded into silence.

Reviews of 4’33″ by John Cage usually discuss the ambience of the performance space, or consider the profound effects that silence has on the human soul. For this composition without a single note, it is amazing what it can teach, and what its effects yield.

The players tuned and then, 4’33” began its three movements of contemplation.

Even in the most closed-off concert space, a listener will realise that there is no such thing as silence. Not even retreating into your mind will you find the hush of stillness, just as I didn’t in this semi-dark theatre. I’m sure many thoughts of this turbulent world and loved ones passed through people’s minds in these silent minutes.

Following this the Alma Moodie Quartet gave the world premiere of a work by 2021 Canberra International Music Festival composer in residence, Brian Howard. His Fifth String Quartet, entitled Blue Poles, is based upon Pollock’s artwork of the same name, and was commissioned by Kim Williams for the 2022 CIMF.

This was such a complex and technical work that three of the players required page-turners so they could concentrate on their performance, something I’ve never witnessed on a concert stage ever. This was an atonal work, the likes of which have not been heard in new music throughout Australia for some time. That said, the four individual lines of music somehow all fitted together. The aural landscape seemed to represent the dynamic and vibrant splashing and dripping that is Blue Poles.

The quartet performed it with gusto, passion, and accuracy, and it required all this. Harmonics featured heavily, their bows kept close to the bridge (sul ponticello) to create that empty space sound. The tempo of some parts must have been marked ‘as quick as possible’. Most of the music sat mid-register for all instruments, and its sound seemed to create an atmosphere of struggling with itself.

A dynamic performance of this one-movement work set the stage and listener’s ears on fire.

To finish, Matthew Doyle came back on with his didgeridoo to pick up where he left off. The continuous sound, deep with feeling and a pulsing rhythmic tapping, wound up a fascinating concert.