Sydney percussionist and leader of Ensemble Offspring Claire Edwardes is a nominee for the 2021 Limelight Australian Artist of the Year, and if you have seen her in action you will understand why.

The Ensemble’s latest outing is, unfortunately, confined to YouTube as part of their new digital series Offspring for All. Originally it was to have been performed live at the Sydney’s Seymour Centre but Edwardes recorded it her home instead when concert halls closed yet again. The light and airy room with its pot plants, bookshelf, armoire with bottles and a spectacular leaf-shaped wall ceramic make for a bright and welcoming “stage” for the trio of unlikely instruments – Edwardes’ marimba, Jason Noble’s bass clarinet and guest artist Emily Granger’s beautiful concert harp. 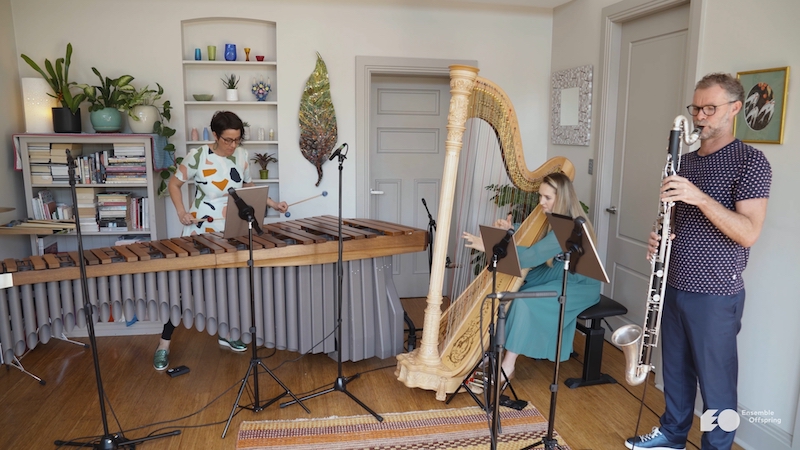 All the works are new – including a world premiere of a work by Gerard Brophy written for Ensemble Offspring – or newly reworked and have a fresh off the page feel. In fact, US percussionist-composer Nathan Daughtrey’s work Verve for bass clarinet and marimba is so new that this was the first time Edwardes and Noble had played it – not that you would have noticed in a work inspired by the word “verve” and all that it means. Jazzy woodwind riffs flirt with the marimba’s driving syncopated counterpoint in a building ascent up the scales.

Composer Tristan Coelho and his fiancée Granger are neighbours of the Edwardes clan. The harpist asked him a few years back to write a solo for her when she was flying back and forth between US and Australia. The result – in transit for solo harp – sums up the feelings about being in limbo and not at your destination point. It’s a gentle unfolding of harmonics and chromatic arpeggios and at times there is a Celtic, Alan Stivell-like feel. This lacy delicacy gives way to a more spirited section in a piece which exploits all the virtuosic techniques that Granger brings to her instrument.

As Noble rightly points out introducing the next piece there is an extremely limited repertoire for bass clarinet, marimba and harp but he managed to find one written by the young Icelandic Gunnar Andreas Kristinsson, called PASsaCAgLia B. The title is a play on words juxtaposing the Baroque slow processing measure – much beloved by later composers like Britten and Shostakovich – and the numerical triangle named after the mathematician Blaise Pascal. The slow marching beat is tapped out on marimba and drum and harp, while the bass clarinet carves out a somewhat chilly, hollowed out sound world which builds in intensity and then dies.

US composer Caleb Burhans’ Once In a Blue Moon for harp and marimba, like the preceding work, was written for the Icelandic ensemble Duo Harpwerk but he chooses a much warmer palette. This is a very engaging duet resting on a folky chord sequence, its simple harmonies gradually becoming slightly distorted as the marimba turns up the volume.

Brophy’s new work is a highlight of this hour-long program. Just outside Van for bass clarinet and marimba is a series of musical impressions of the culture and geography of an area of Turkey where the composer has spent much of his time. He is no stranger to Ensemble Offspring and their followers, the group having turned his Beautiful Birds commission into a concert favourite. For this video they perform three of what Noble describes as “vignettes” which remind him of Debussy’s Preludes and the way they conjure up a miniature world.

For Aghtdamar, the clarinet summons a Turkish-sounding chant-like figures over the drone-like beat of the marimba, evoking the 10th-century cathedral which was the centre of the Armenian culture in the area. Hosap – inspired by a medieval Kurdish fortress near the Iranian border – is a livelier movement, both instruments riffing in unison in a jazz-like chorus, while for Varagavank – a largely destroyed Armenian monastery complex – Noble’s woody bass weaves lugubriously over the restless marimba.

Elena Kats-Chernin’s Blue Silence, which gives the recital its name and finishes the video, is a work that needs little introduction. Second only to Wild Swans for its popularity, it was originally written for cello and piano but has been reworked for countless permutations of instruments. Written for her son Alexander and dedicated to all parents of children with schizophrenia, its repetitive warm and simple tune is able to immediately conjure up love and serenity.

Its gentle rhythm, emphasised by Edwardes’ swaying as her mallets strike the five-octave keys of the marimba, summons up the healing properties of the colour blue, making it a healing balm for these pandemic times.

Blue Silence is available on demand on the Ensemble Offspring website.

Emily Granger and Joshua Batty headline a delightful evening of art, wine, conversation and music at the Ken Done Gallery.

No problems for Houston as moon gig lifts off.

When Claire Edwardes first discovered this weird and wonderful instrument in Holland she thought it might be rather one-dimensional, but in fact, she has discovered it is full of sonic possibilities.

We speak to Artistic Director Claire Edwardes about a quarter-century of new music, and celebrating a milestone birthday under unusual conditions.