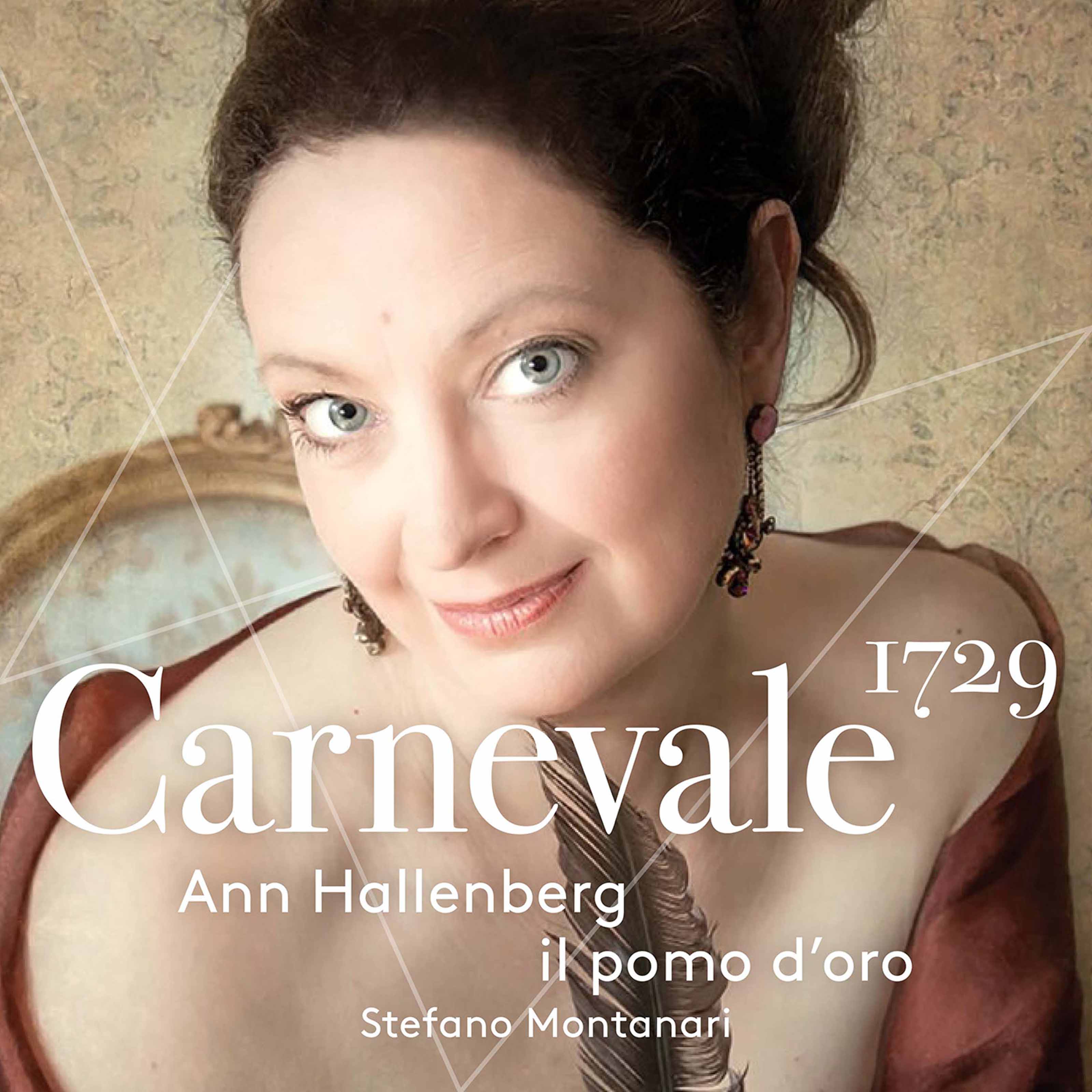 With her latest album, Swedish mezzo-soprano Ann Hallenberg invites her listeners to join her and Il Pomo d’Oro at the greatest musical party of them all: the Venice Carnival. The year is 1729 and the city’s public opera houses are fierce rivals for the time and money of the many carnival visitors. Competing in a crowded market seems to have spurred composers to new heights of virtuosity and expression, and the result is this dazzling collection of arias – all performed within the eight-week period of carnival festivities.

The composers included here may start with unfamiliar names – Geminiano Giacomelli, Giuseppe Maria Orlandini – but by the second disc we’re into the big names of the period, with music from Albinoni, Leo, Porpora and Vinci. What’s interesting however is the consistent quality. Hallenberg’s research (in partnership with her musicologist husband Holger Schmidt-Hallenberg) takes a lot of the credit for sifting through the sheer volume of material, but chance historical events also play their part.

An unlikely concatenation of circumstances meant that in the winter of 1729 three of the world’s greatest singers – mezzo Faustina Bordoni and the castratri Senesino and Farinelli – all converged on Venice. The result was a musical duel with semiquavers as ammunition, a battle the like of which the city had never seen.

Hallenberg’s mezzo is a blissfully refined voice, agile and utterly, easily precise through coloratura passages, capable of both soprano-like, ingénue delicacy at the top of her range and meatier, full-blooded colours at the bottom. All get an airing here. There are meteor showers of semiquaver brilliance in Albinoni’s Fio ch’a spuntar se vede, while Hallenberg and the orchestra take a gutsier approach to Orlandini’s storm-tossed number Scherza in mar la navicella and Porpora’s blazing In braccio a mille furie, where the tone is more oaken and the textures rougher and more characterful.

The filmy delicacy of Hallenberg’s ornamentation finds a graceful showcase in Porpora’s Bel piacer saria d’un core from Semiramide Riconosciuta, and she relaxes beautifully into the endless legato of Orlandini’s Vedrò più liete e belle and the proto-Mozartian poise of his Quanto bello agli’occhi miei.

Under Stefano Montanari’s detailed direction, Il Pomo d’Oro once again demonstrate why they’ve become the go-to band for baroque recital albums, mining such riches from their accompaniments, with obbligato soloists (notably the exquisite violin in Porpora’s Il pastor se torna aprile) matching Hallenberg’s rhetorical care in their articulation and phrasing. Carnival has rarely been this classy.

A masterclass in baroque vocal pyrotechnics from the best.

It was the soundtrack to 1994 film Farinelli that put Les Talens Lyriques on the musical map over two decades ago. Now Christophe Rousset and his musicians mark their 25th anniversary by coming full circle, with an album of arias associated once again with the 18th century’s star castrato. But Farinelli is now well-trodden ground. Vivica Genaux, David Hansen and Philippe Jaroussky are just the most recent singers to lay claim to this repertoire on disc, so is there really a need for another homage? There are two strong arguments in this disc’s favour. In Ann Hallenberg, Rousset has a collaborator whose agility, power, and range of vocal colour is singular – capable of inhabiting both of Farinelli’s contrasting musical personalities. The project is also particularly canny in its repertoire choices, rejecting the usual single-composer route in favour of a broad selection of musical highlights from, not only Handel and Porpora, but also Leo, Hasse, Giacomelli and even Farinelli’s own composer brother. The result is a disc full of musical drama, heightened by a live recording originally made in 2011 at the Bergen International Festival. After a slightly slow start in Riccardo Broschi’s handsome, but pedestrian Son qual nave and…

Editor’s Choice, Opera – August 2015 A few years ago I welcomed unreservedly the revelatory recording of Leonardo Vinci’s late opera Artaserse (Virgin 6028692) as an undiscovered masterpiece. Featuring a stellar line-up of no less than five countertenors (thanks to prudish Roman fashions, the women’s parts too were written for men), the opera, composed in the high-Neapolitan gallant style is a glorious succession of imaginatively scored virtuosic arias with no duds and plenty of hummable tunes. With the same cast bar one, this DVD is in some ways even better as the confusion between who is singing what, when so many roles are sung in falsetto, is no longer an issue. Artaserse was one of the hit libretti of the period, set by everyone who was anyone, but Vinci’s is rather special. The villainous vizier (Artabano) has killed his king letting suspicion fall upon his own son (Arbace), best friend to the new king (Artaserse). When Arbace won’t dob on dad, a tangled web of blame and deceit ensues before all comes good in a magnanimous finale involving a poisoned chalice. Silviu Purca˘rete’s production is the campest thing you’ll see this side of Eurovision, with costumes that would make Cinderella’s…

I’m sure everyone has a favourite Karajan recording – no doubt he’s a regular in this feature. But my pick isn’t a Beethoven or a Mahler Symphony, nor is it mighty Wagner. No, I’m a sucker for the Berlin Philharmonic’s Baroque – and I don’t even mean their Four Seasons. One of my all-time favourite recordings is a very modest 1987 Deutsche Grammophon compilation of random Baroque gems, most of them Italian. This CD has been a part of my life since childhood – and surely all good classic recordings have an element of nostalgia attached to them. But what I find most endearing about Karajan’s Baroque is the orchestra’s sumptuous, full tone (boosted by generous helpings of vibrato). These recordings were made between 1970 and 1972, at a time when the Historically Informed Performance (HIP) movement was picking up in Europe and specialist ensembles were being founded all over the place to give us authentic readings of all that early repertoire.  Don’t get me wrong: I absolutely love contemporary approaches to early music performance, and I’m usually for the ‘less is more’ approach when it comes to vibrato. But there’s something about the way the Berlin Phil’s playing never betrays…

Limelight Editor’s Choice – Orchestra – September 2014 Deutsche Grammophon’s reboot of period performance imprint Archiv has definitely got off to a flying start, with stylish Spanish conductor Pablo Heras-Casado and acclaimed period instrument band Concerto Köln serving up fiery musical tapas from Baroque rock star Farinelli’s Spanish sojourn. In 1737 King Philip V invites Carlo Broschi aka Farinelli, the greatest castrato of all time, to Madrid to sing solely for him. He accepts. After Philip’s death, Ferdinand VI appoints Farinelli artistic director of the palace theatres in Madrid’s Buen Retiro and Aranjuez. In his new role as impresario, Farinelli collaborates closely with librettist Pietro Metastasio and uses his extensive Neapolitan contacts to secure the services of some of the finest composers and musicians of the day. The results are game-changing. “Farinelli secured the services of the finest composers and musicians of the day” In his 12 years in the job, Farinelli succeeded, as Michael Church writes in his program notes, in raising the profile of Spanish music from “a kind of provinciality to being a major presence in the European mainstream”. Heras-Casado, whose own Aranjuez-based group La Compania Teatro del Principe specializes in music from the court of Ferdinand VI, has…

Simone Kermes: Baring all for the Baroque

The short life of the Neapolitan composer Leonardo Vinci reads like an opera plot, full of triumphs and intrigues and culminating in death via a cup of poisoned chocolate. Yet the “Lully of Italy” blazed brightly, renowned in his day for his melodic style and natural expression. Artaserse, presented in Rome in 1730 a mere three months before the composer’s sticky end (pardon the pun), was his crowning glory, typical of his gift for vivacity unburdened by weighty matters of musical structure. The libretto, by the great Pietro Metastasio, is a tale of murder, betrayal, love and honour at the Persian court and is representative of his lofty yet accessible approach. As this was the age of the castrati and women were forbidden on the Roman stage, all six of the characters, including the two female roles, were played by men. Cue this historical reenactment with five of the best countertenors around ready to do battle with Vinci’s challenging tessituras and florid vocal lines. I’m happy to report that there isn’t a duff singer to be found on this recording. The two star names, Philippe Jaroussky as King Artaserse and Max Emanuel Cencic as his sister Mandane, are class acts,…