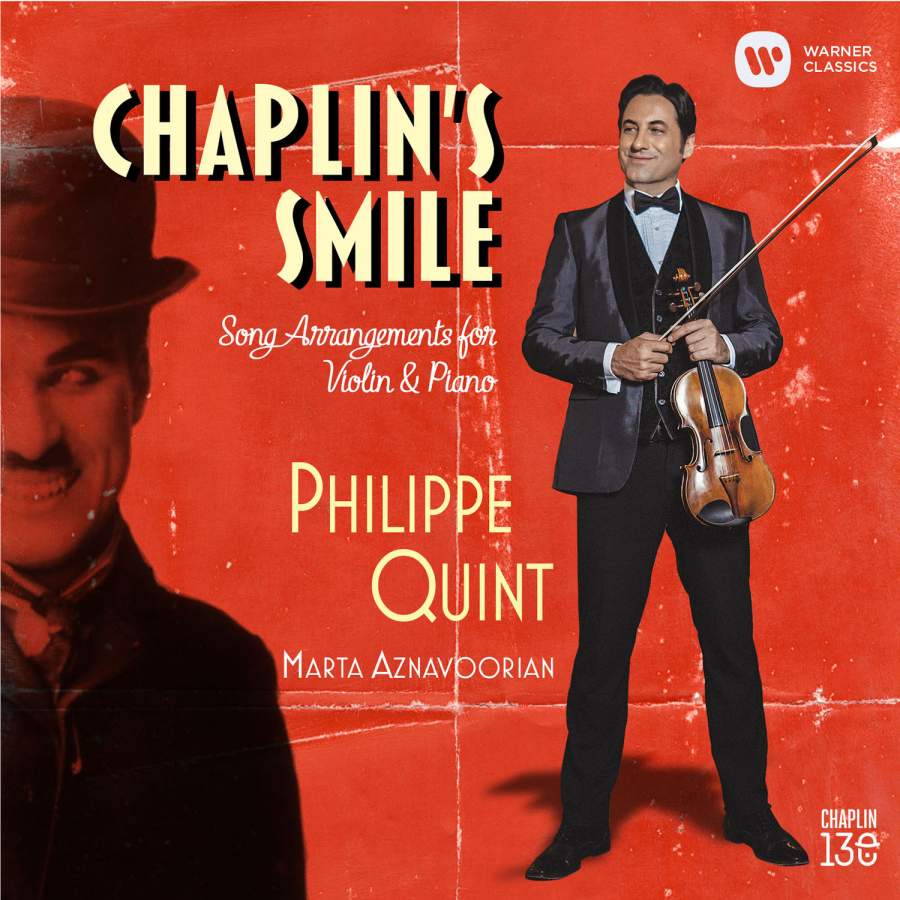 The sum of Charlie Chaplin’s musical legacy is often and incorrectly considered to be the 1954 song, Smile, which began decades earlier as a love theme in the film Modern Times. For his Warner debut, violinist Philippe Quint, accompanied by pianist Marta Aznavoorian, and joined on two tracks by violinist Joshua Bell, reveals the true depths of Chaplin’s musical mind.

Chaplin composed for most of his career, publishing music from 1916, through the silent film era, and from 1931 composing film scores for the remainder of his life. He claimed music had “entered his soul” as a young man. But Chaplin struggled to be taken seriously. He couldn’t read or write notated music and was dismissed as an amateur, a charlatan: a mere ‘hummer’.

It took a small army to translate Chaplin’s humming, off-key singing, and haphazard piano and violin playing into orchestral reality. Quint has now arranged the works for violin and piano. Some room is allowed for interpretative performance, although the arrangements generally adhere to their origins as sentimental film tunes. There is some schmaltz, but it is controlled and contextualised, and there is much artistry, virtuosity, and energy alongside this apt romanticism.

Quint, Aznavoorian and Bell reveal the disarming simplicity of Chaplin’s graceful and charming music, which, as the violinist says, “reaches the deepest parts of our souls”.

New York's premier summer festival may not be mostly Mozart these days, but it sure has plenty to offer.

He found fame with his iconic screen persona, but not everyone knows Charlie Chaplin was a gifted violinist who composed the scores for every one of his films. Clive Paget talks to Philippe Quint, who has arranged a dozen of his greatest hits, about The Little Tramp’s musical connections.

Academy of St Martin in the Fields nurtures young composers

Twins Jessica and Olivia Ellis brought their instruments and open minds to the orchestra's composition masterclass.

Review: The Academy of St Martin in the Fields (Sydney Opera House)

An exhilarating concert, led by a vigorous violinist.

Review: For the Love of Brahms (Bell, Isserlis, Denk, ASMF)

This a strange compilation with a convoluted concept, can’t help but be amazed at the sound of the ASMF.