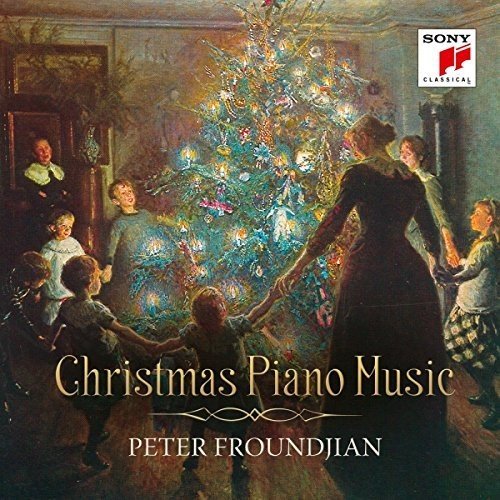 It would be a fair call to describe eclectically-minded pianist Peter Froundjian as a regular traveller along the by-ways of the repertoire. So keen is he on championing the underplayed, he founded the respected Raritäten der Klaviermusik (Rarities of Piano Music) Festival that has taken place in Husum – that’s in Schleswig-Holstein – every year since 1987. Here, he turns his prodigious programming brain to Christmas music with predictably engaging results.

“By its very nature the piano is not really an instrument that we associate with Christmas,” says Froundjian in his authoritative booklet essay. “When we think of Yule, we tend to think, rather, of solo and choral singing, recorders – and the sound of brass and strings – and the organ, especially since there is nothing remotely sacred about the sound of the piano.” It’s a moot point, and Froundjian describes the tracks on this generously filled Sony CD as more like “meditations” on orchestral or vocal Christmas music with which we are likely to be familiar. If that makes you worry that all you will get are some souped-up variations on Hark the Herald, fear not, there’s plenty here – and a fair few gems – that entertains as music in its own right.

Take Snowflakes, the opener by the Finnish composer Selim Palmgren (1878-1951). Three minutes of perfection, it manages to remind one of church bells and winter snow all at once. Equally magical, and similar in feel, if a bit more churchy, is Busoni’s impressionistic Nuit de Noël from 1908 (most of this repertoire spans a century from 1850-1950). If Lyapunov’s Nuit de Noël and other works by the likes of Gustav Helsted (1857-1924)and Franciszek Brzeziński (1867-1944) occupy similarly cool emotional territories, they are offset by more sprightly dance-inspired pieces like Pastorale by Ignaz Friedman (1882–-) and the jaunty  Jule-Idyl by Alfred Tofft (1865-1931). The carol-inspired works are there too – like Nielsen’s Drømmen om Glade Jul from 1905 that riffs on Silent Night and Bax’s rumbustious O Dame Get Up and Bake Your Pies, which employs a similar musical pattern to I Saw Three Ships.

The two big ticket items here are Koechlin’s imaginative Pastorales – 12 short, improvisatory pieces written without bar lines and nodding towards the world of polytonality – and the seven Pastourelles by Désiré-Émile Inghelbrecht (1880-1965). The Inghelbrecht gives real pleasure, ingeniously reworking a handful of familiar Provençal carols – watch out for Il est né, le divin enfant and the catchy farandole from Bizet’s L’Arlésienne.

Froundjian is never one to thrust his own personality in front of the composer’s, and this enjoyable recital is played throughout with pure tone and the just the right degree of simplicity and grace. Sony’s piano sound is most natural too, ensuring that these sometimes fragile works are given the best possible chance to argue their cases. An excellent stocking-filler for the pianophile in your life.

It’s back to Vienna again for Kaufmann’s latest operetta-fest.

More is more: Kirill Gerstein makes an eloquent case for the supersize.

The Russian-American pianist tells us about recording the Busoni Piano Concerto, Limelight's Recording of the Month in June.

The Russian coloratura takes her next vocal steppes.

Gillham puts the romance back into Bach with a little help from his transcribers.

Lyricism and subtlety in a programme that favoured tranquility over excitement.

Review: In and Out of Time: Maria Razumovskaya

Antonio Caldara, born in Venice in 1670, became vice-Kapellmeister at the Viennese Hofkapelle in 1716 remaining until his death in 1736. There he had a fine ensemble of musicians and this recital showcases some of the more unusual instruments he had at his disposal including the salterio – a large hammered dulcimer. Valer Sabadus, one of the five star countertenors on Virgin’s lauded recording of Vinci’s Artaserse, performs a brace of arias from opera and serenati. His bright bell-like tone and effortless fiorature is startling from the get-go and his accompanists play with gusto. Sample track five Ahi! Come quella un tempo città, where a plethora of plucked instruments is a sheer delight with the state-of-the-art recording capturing every nuance from thrumming bass notes to glittering treble. Ditto the following Ah se toccasse a me with a pair of lutes duetting in call and response. Questo è il prato pairs haunting flute and chalumeau – a primitive ancestor of the clarinet with a peculiar rustic sound of its own.  Lute aficionados will enjoy this disc as Caldara wrote for the great Francesco Bartolomeo Conti, and Michael Dücker (who leads the ensemble) is a thoughtful player. Cellist Ulrike Becker and ensemble…

Editor’s Choice, Jan/Feb 2016 – Instrumental It has been clear for some time that Lang Lang has grown into a sensitive, thoughtful musician. He was always an excellent technician and a marketing department’s dream: reading the blurb accompanying this release you might assume that no pianist ever recorded anything in Paris before. My research suggests otherwise. With his huge Chinese fan base, Lang Lang is the most well-known classical pianist on earth. Some condemn him for sticking to a narrow Romantic repertoire when he could be commissioning new work or rediscovering forgotten masterpieces. Certainly, while Chopin’s Scherzi are not easy to play, they are nothing compared to the challenges a pianist like Marc-André Hamelin routinely sets for himself. However, in his own way Lang Lang is pushing the envelope. He recently recorded Bartók’s Second Piano Concerto – much less user-friendly than the Third – and here he plays Tchaikovsky’s relatively rare set of 12 pieces, one for each month of the year, misleadingly titled The Seasons.  Appropriately, Chopin provides the stylistic model for Tchaikovsky’s piano writing, with its limpid melodies and touch of melancholy. Lang Lang allows his expressive palette full rein, whether it be in the relentless rhythmic patterns…

★★★☆☆ Ferrucio Busoni (1866-1924) was the outstanding piano virtuoso of his time. Performance activity interfered with his composing, much to his annoyance, but he produced highly individual works.  He also made transcriptions of music by Bach, mainly of organ works. Two such pieces are played here: the Prelude and Triple Fugue in E Flat (St. Anne), and a Fantasia after Bach (1909). The original works, all from Busoni’s later years as he suppressed most of his earlier music, are the exquisite Ravelian Nuit de Noël, the Prélude et étude en arpèges, Variations on a Prelude of Chopin, and Toccata: Prelude, Fantasia and Chaconne. The Toccata was his final composition, a fine example of his unique harmonic sense, as well as the tremendous technical difficulty of his piano music. His Chopin Variations of 1922 give Brahms’s Paganini Variations a run for their money. American pianist Jeni Slotchiver is a Busoni specialist. This is the third disc in her series; earlier issues contain the slightly better known Elegies and Sonatinas. Some unevenness in descending arpeggios aside (in the Etude), she undoubtedly has the necessary technique, and her booklet note attests to her deep knowledge of this music. However, Marc-André Hamelin recorded a 3CD…