I have been thinking recently about the impact that Covid-19 has had on Australian performers and audiences – the decimation of the industry, our tentative return, and the trepidation still felt by musicians and music lovers across the country. We have, of course, been focused on rebuilding as we should, but it cannot be overstated how significantly the sector has been hit, and how challenging it continues to be to sustain a creative practice. Right now, we are in the throes of a deeply troubling wave of this virus, and the commitment to creation despite these ongoing challenges is more important than ever. It felt truly poignant arriving at the Fitzroy Town Hall for the Leaps and Bounds Festival – Yarra’s winter music festival and a true celebratory offering of local talent – to hear new works performed by four acclaimed home-grown artists who have been trying to get on stage together since Melbourne’s 2020 stage four lockdown. 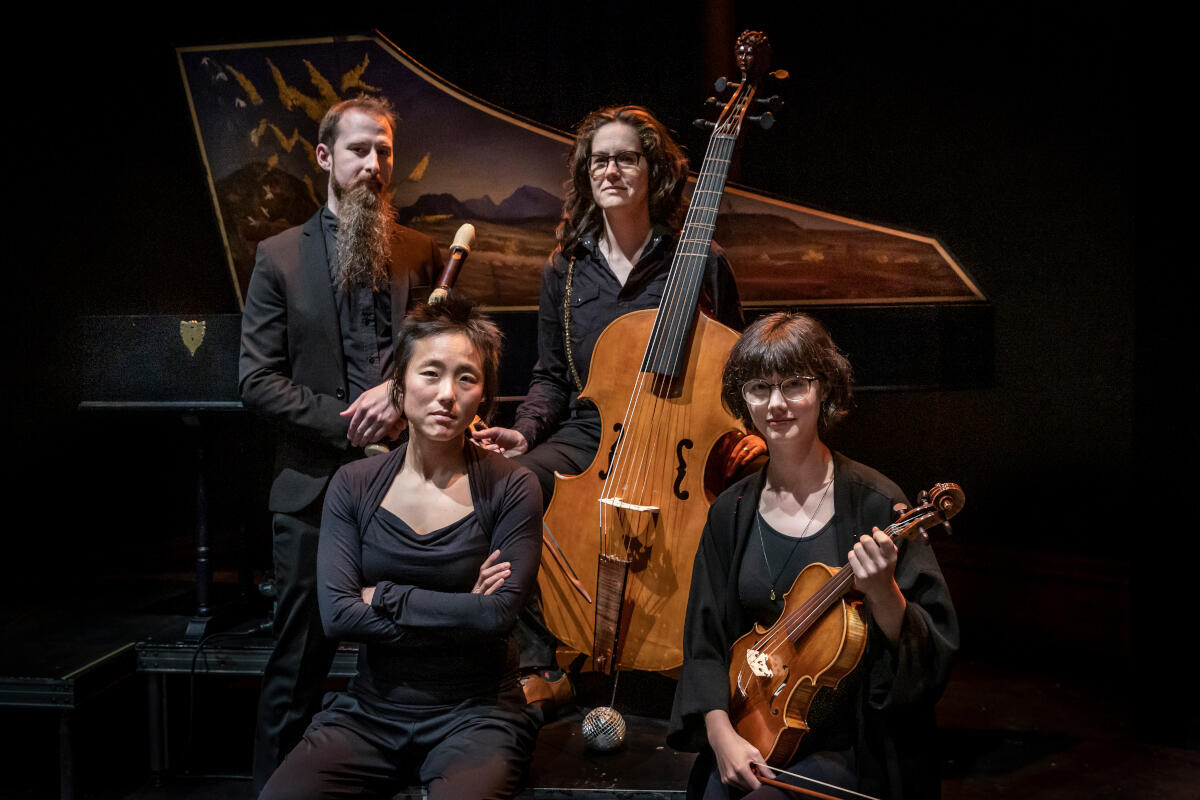 The ‘prog-baroque’ quartet Croissants and Whiskey has had a stop-start introduction to its audience as a result of the virus and associated lockdowns. At this debut performance, the joy felt at finally being together and sharing their music was palpable. We, the lucky first audience – packed to the rafters in the Town Hall’s Reading Room  and treated to the ensemble’s namesake indulgences prior to the performance – sat alternatively moved and laughing, happily wading in the great gift music is when created by people deeply committed to it and each other.

Croissants and Whiskey is made up of four musicians, who are all individually well-known to Melbourne audiences. They are Joy Lee (harpsichord), Ryan Williams (recorders), Katie Yap (Baroque viola) and Miranda Hill (G violone), and they performed an eclectic program of the new and old; Australian premieres alongside Couperin. They welcomed the audience warmly, introducing themselves as friends and admirers of one another, before launching into Louisa Trewartha’s clever and incisive new Baroque Quartet in two movements – the first, Full of Fear and Anger, a fragmented and raw expression of the aggression played out on social media in the early days of Melbourne’s lockdown. Ruminating on the experience of watching people argue online, Trewartha’s driving harpsichord and G violone lines argued away while a plaintive, mournful melody ascended in the recorder and viola. The second movement, Empathy grows as we learn, is named after a quote borrowed from Swiss psychologist Alice Miller. In it, the bite of belligerence gave way to a warmer sound, though the undercurrent of dissonance never quite left and skilfully reflected the experience moving through our growing understanding of the pandemic.

An acknowledgment of grief threaded into the next work, Aftermath, a moving homage to the grief felt following the Tasmanian bushfires of 2016. Written for solo viola by composer and violinist Emily Sheppard, it played beautifully to the strengths of Yap, who apart from her technical prowess was able to straddle the work’s musical challenges with ease to create a chilling but hopeful performance that left our audience on the verge of tears. Yap was extraordinary here and able to lose herself completely in the music. It was a testament to Sheppard’s understanding of the possibilities and constraints of working with the solo viola, as well as the composer’s ability to create something innately emotional without ever giving in to the overly sentimental.

To conclude the first half of the program, Williams’ own Tanjil Bren Suite took us on a brief sojourn to regional Victoria – the three pieces, each named after parts of the state, were in turn humorous, moving and longing. Borrowing from folk, jazz and new music traditions, Williams’ exploration brought out a sense of play in the four musicians – a sense of improvisatory bliss that felt true to the Baroque sensibilities underpinning this new ensemble. That understanding and elation in creating a true-to-period sense of live inventiveness continued in the opening of the second set, with Lee’s solo performance of Couperin’s unmeasured Prélude in G minor, written around the 1650s. There was no sense of staid performance technique in her interpretation and it came alive under her fingers as she weaved her own narrative arc into the piece. Moving without pause into Nigel Butterley’s The White-Throated Warbler, Lee was joined by Williams as they brought to life the strange and compelling 1965 work that drove ceaselessly in the harpsichord while the recorders (playing the warbler) danced and played over the top. Williams, an exacting, characterful musician, embodied the bird perfectly – so much so that when a bird outside the window of the Town Hall called back to him, no one was surprised.

A slightly undercooked CPE Bach Trio Sonata followed. This was not entirely the fault of the musicians, as the lacklustre composition did little to help itself and proved perhaps why it has taken so long to create works for this combination since. The F Major sonata is the only work written in the period for this arrangement of musicians. Listening to the other commissioned works on the program, it felt like this ensemble is doing a great service in changing the way these four instruments are played together. Happily, we were left with an exceptional world premiere from Elizabeth Younan, The Fertile Crescent. This piece, commissioned by the ABC Composer Commissioning Fund and recorded recently by the ensemble, was Younan’s first foray into exploring her Lebanese heritage through music. What resulted was a thrilling Shostakovich-esque trio of dances, that were not only rhythmically electrifying, but also playfully orchestrated and made insightful use of the quartet’s textures. I hope this is the beginning of much more new work for Croissants and Whiskey.

This was a charming and meaningful performance, made all the more so by the performers’ warm and down-to-earth presentation, their technical brilliance and their commitment to new music. Consider this reviewer a convert to the magic of recorders, harpsichord, G violone and Baroque viola!

Bartsch's Merlyn Myer Commission, along with arrangements of selections from her solo classical/jazz hybrid albums, provides a subtle submergence in a range of lush lullabies and flowing lattices of chamber writing.